Today's celebration was the first event hosted by San Juan College's African American Club, which was founded in September

The celebration was the first event the new club has hosted since it was founded in September, and it was a fundraiser for a larger event the club is planning for Black History Month in February.

“For me, it's a struggle about equality and freedom and celebrating a person who was not afraid to break down those walls.”

While the club is focused on African American heritage, it aims to include "all the different shades of color," said member Alena Jenkins, who is African American and grew up in New York and Pennsylvania before recently moving to Farmington.

Fellow club member, Olivia Myers, a white woman who grew up in San Juan County, said the club hopes to break down barriers.

Both Jenkins and Myers said they were excited to host the club's first-ever Martin Luther King Jr. Day celebration.

"For me, it's a struggle about equality and freedom and celebrating a person who was not afraid to break down those walls," Myers said. 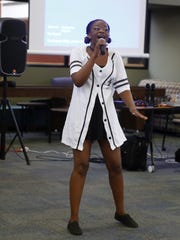 Diane McCants, a member of the National Association for the Advancement of Colored People, said Martin Luther King Jr. Day is a time to celebrate King's legacy and how it brought the country to where it is today.

"Had that not happened, we wouldn't even be able to be at the college today," she said.

McCants and Frances Vitali are working to collect stories of the African American experience in Farmington.

One of the first stories they collected was from the Rev. Henry Fleetwood of Ideal Baptist Church and the struggles he faced trying to obtain land for the African American church in the 1950s. Vitali, who portrays historical figures in presentations at local schools, has since added Fleetwood's story to her repertoire. 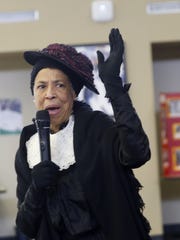 Crystal Mason, who attended today's celebration, recalled her own experience growing up in Farmington. She said in her school, there were three black students, including herself.

"I felt pressure that I had to represent my race every day of my life," she said.

Alijah Johnson, 15, said it is still a challenge to be among the few African Americans in Farmington. He recalled people staring at him and his mother and commenting while they were shopping.

"We're all the same inside, so why can't we all see that?" he said.