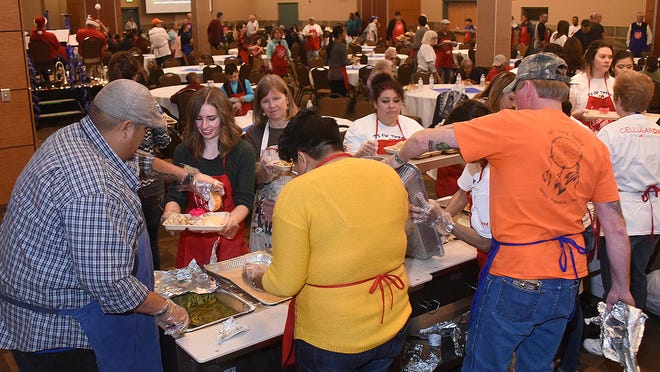 FARMINGTON — Volunteers from the community came together to host a free Thanksgiving meal this afternoon at the Farmington Civic Center.

Organizers said about 1,200 people were fed at the annual event, which is double from the 600 residents who attended the meal last year.

The meal was organized by Farmington's Salvation Army branch, and local businesses and organizations donated food for the event. This marked the fourth year Lt. Bill Simon, a Salvation Army administrator and minister, has run the event, along with his wife.

After the meal, Simon said he didn't know why attendance at this year's event doubled, but he said the state of the local economy may have been a factor.

"There were a lot of folks that lost their jobs (this year)," he said.

Before the doors opened at 11 a.m. today, Simon spoke to the volunteers about the groups that donated nearly 200 turkeys and prepared hundreds of pounds of mashed potatoes, gravy and green beans.

"I don’t know what community means to you but that is what it means to me," Simon told volunteers via the Civic Center's loudspeakers.

This year, the local Salvation Army introduced a new program. After the community meal, Simon planned to deliver meals to five residents who were unable to attend the event because of transportation issues or physical limitations. Simon said he hopes to grow the program in the future to include more deliveries.

Volunteers at today's event were excited to serve holiday meals to those in need.

Debra Harris and her daughters, Cassidy and Kaycee, arrived at the Civic Center at 6:45 a.m. to prepare the dessert portion of the meal.

The Farmington mother said the family wanted to volunteer because they don't have family in the area. They spent the day cutting nearly 200 cakes into slices to serve with the meal.

Debra Harris said she was glad her daughters were willing to help the less fortunate.

Andrew and Louise Perry left their home in Crownpoint at 7 a.m. to drive to Farmington to volunteer.

"For some of them, this is the only meal they can get," Andrew Perry said. "I love helping people."

Chris McKee and her two sons, Travis and Daylen, came to the Civic Center from Fruitland for the Thanksgiving meal. The mother complimented both the meal and the volunteers who prepared and served the food.

Shiprock resident Raymond Curley said he liked that area groups, businesses and organizations all worked together for the community.

Perry Begay, president of the fair board, said board members wanted to sponsor the event to give back to the community.