FARMINGTON — Some shoppers who were eager for Black Friday deals arrived at stores in Farmington before the sun rose this morning.

Stores like Kmart, Big Lots and Dollar General opened at 6 or 7 this morning to offer Black Friday deals. Farmington retailers like the Stage and JCPenney department stores opened in the afternoon. Big-box stories like Target and Wal-Mart started their sales at 6 p.m.

At the Stage department store — previously called Bealls — in San Juan Plaza, a crowd of 20 to 30 people were shopping at about 2 p.m. today. Many said they had already eaten their holidays meals. Martina Lewis was in line at Kmart with her husband when the store opened its doors at 6 a.m. They purchased a number of gifts, including a trampoline.

After that, Lewis and her family sat down for an early Thanksgiving meal before starting a second round of shopping.

"Just the convenience of coming in early and getting all the early deals before everyone else," Lewis said about why she shops early on Thanksgiving.

Dora Garrillo shops for her family at the Stage department store in Farmington on Thursday. (Photo: Steve Lewis/The Daily Times)

Victoria Barrientos was preparing to stop at Wal-Mart after her trip to Stage to look for gifts for her three children.

Barrientos said she welcomes the change many retailers have made to start offering Black Friday sales on Thanksgiving. She said that removes some of the craziness that stems from packing all of the sales into a single day. With more ways to shop, a relaxed Black Friday?

Some shoppers lined up on Wednesday evening to make sure they could get the items they wanted.

The line at Best Buy in Plaza Farmington was about 25 people long at 2:30 p.m. today, two and a half hours before the doors opened at 5 p.m. 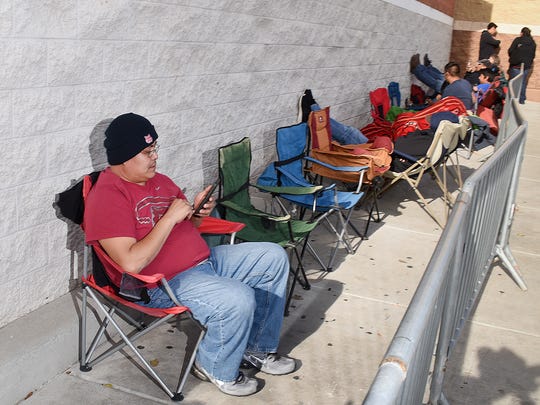 Herschel Sherman makes himself comfortable in front of Best Buy in Farmington on Thursday. Sherman said he arrived at the store at 6 p.m. Wednesday to be first in line when the store opened at 5 p.m. Thanksgiving. (Photo: Steve Lewis/The Daily Times)

Stationed at the front of the line near the store’s entrance was Toadlena resident Herschel Sherman. He got in line at 6 p.m. Wednesday and hoped to snag a 42-inch Toshiba 4K Ultra HD TV.

He said he was alone in line with his friends until about six hours later when someone joined the line at midnight.

"It’s pretty fun and not too cold," Sherman said.

Sherman and his friends camped out in a tent on the sidewalk and had friends bring them food.