College President Toni Pendergrass said the event was being held because technology remains a part of everyday living, and access to electronic devices continues to increase, resulting in data breaches and data security issues.

According to estimates by the U.S. Department of Commerce, the number of electronic devices connected to the Internet will triple by 2020, she said.

"It's our goal over the two days to bring awareness about cyber security and to provide all of you with tools, that you'll be able to protect yourself both personally and professionally," Pendergrass said.

The increase in technology and Internet use has led to more employment opportunities, including those based in the cyber security field. In response, the college is working to expand the number of students earning credentials in information technology and security programs, she said.

Bill Hall, the FBI agent in charge of the Farmington field office, provided an overview of the bureau's efforts to combat cyber threats as part of his keynote address. 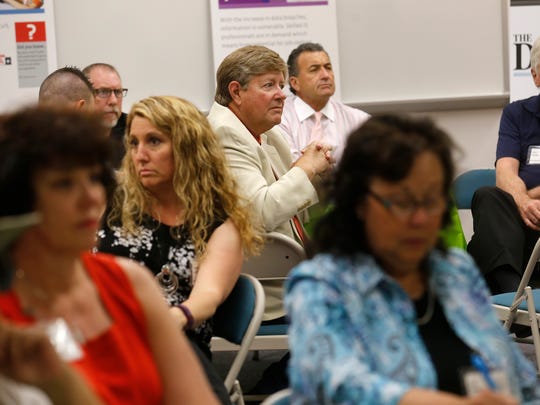 With Internet use being the norm, the FBI continues to combat cyber threats that exist nationally and globally, but threats and intrusions are becoming more sophisticated, he said.

"The intrusions are becoming as complex as the equipment we work off of and we work with," Hall said.

Companies can be threatened by adversaries or insiders distributing information, colleges are targeted for their research work, individuals are singled out for identity theft and children are fixed on by predators, he added.

Among the threats faced by businesses are ransom ware and distortion ware, both of which involve the use of malware to lock a computer’s hard drive. The perpetrator then demands a ransom in order to grant access, Hall said.

"To date, terrorists have not used the Internet to launch a full-scale cyber attack, but we cannot underestimate the intent," he said.

One way the bureau is addressing the issue is by using the investigatory authority of its cyber crime division and examining cyber threats by partnering with other federal agencies.

Each of the 56 field divisions in the FBI has a cyber division that specializes in cyber crime, Hall said. Agents also undergo annual training regarding cyber threats and attacks, he added.

The FBI also accepts complaints about Internet crimes at its website, ic3.gov.

Shawn Shay, director of technology for the Aztec Municipal School District, was attending the conference to learn about emerging threats and to collaborate with peers.

"This is the first time we've had anything security related in this area, and I wanted to see what it's about and see if it addresses any of our needs in the district," Shay said.

He said it is important to learn about threats because the district has student data, and an attack to steal information could occur.

"We want to make sure we're protecting them the best we can," Shay said.

The conference continues from 8 a.m. to 4:30 p.m. Friday at the Quality Center for Business at San Juan College, 5101 College Blvd.