Council may walk back rejection of solar farm

The City Council will reconsider its denial of a solar farm at San Juan Regional Medical Center.

Council may walk back rejection of solar farm 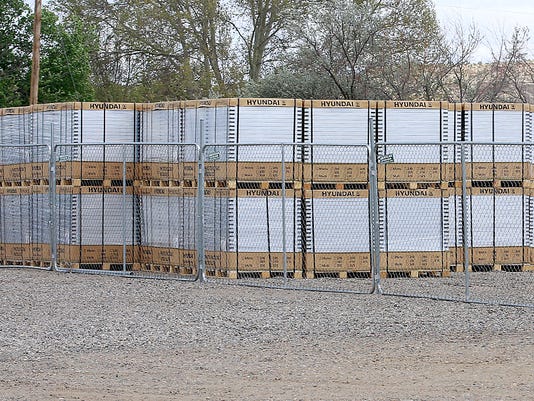 Stacks of photovoltaic modules for a planned solar far sit in an empty lot on Saturday at the end of South Drake Avenue between West Pinon Street and West Murray Drive.(Photo: Daily Times file photo)

Councilors on Tuesday will vote on a motion to reconsider a zoning change that would allow the hospital to build its 6,000-panel array. If the measures passes, councilors will decide once again whether to approve the project.

Last month, councilors ruled 3-1 against the zoning change on the basis that the project was too industrial for the neighborhood. But the 12.3-acre property in question, located between West Piñon Street and West Murray Drive, is flanked on three sides by land zoned for industrial use, leaving critics to speculate on what drove the decision.

“It’s an ideological issue,” Mariel Nanasi, executive director of New Energy Economy, a Santa Fe-based advocacy group for renewable energy, said. “They’re clinging on to the status quo of the past.”

Nanasi said Farmington’s oil and gas-focused government has a history of obstructing solar projects, even though Northern New Mexico has plentiful sunshine.

Like many people in the region, the three councilors who voted against the proposal are associated with the oil and gas industry. Linda Rodgers formerly served as president of the Association of Desk and Derrick Clubs, which touts the benefits that fossil fuels can bring to communities. Sean Sharer is the son of state Sen. Bill Sharer, an advocate for the industry. And Gayla McCulloch co-owns the Drake Well Servicing Company, which borders the proposed solar farm.

Before the vote in April, McCulloch declared that she was an adjacent property owner, but still took part in the decision. City Attorney Jennifer Breakell said councilors are only required to recuse themselves if they have a direct financial interest in the decision at hand.

The councilors were advised not to comment for this story because the reconsideration has taken the form of a judicial process. In previous interviews, all three stated they support solar projects, but thought the hospital’s project was inappropriate for its location. They expressed concern over its proximity to the Metropolitan Redevelopment Area, a part of the city designated for residential and community-based development.

“If I’m a member of the public, I would want to know what changed to cause this new vote,” Boe said. “They're kind of acting as the judge and the jury.”

Hospital officials declined to discuss what response they plan to the council’s denial. Any options, however, would have involved a legal challenge in court.

New Mexico has a strong Solar Rights Act, which in 2007 was amended to say that municipalities shall not limit the installation of a solar collector, except inside historic districts.

When the hospital’s request was presented to the Planning and Zoning Commission, staffers noted the property is not part of any special district and wasn’t annexed into the city until 2014. Additionally, long-term development plans cite the San Juan Regional Medical Center campus as an opportunity to showcase “green” building techniques, which, in turn, can establish a “meaningful trend for the district.” Zoning commissioners unanimously recommended the zoning change be approved.

But when it came before the City Council, Community Development Director Mary Holton was called upon for her professional opinion. She told councilors the location wasn’t appropriate for such a major utility, and she would prefer roof-top solar installations. That concern was enough to cast doubt on the plan for Sharer.

“It really came down to the recommendations from the director for me,” Councilor Sharer said after the April meeting.

The denial came as a shock to hospital officials, who already had purchased the panels, spokeswoman Laura Werbner said. Although officials declined to comment further, in previous interviews, Chief Operating Officer John Buffington said the hospital has been eyeing a solar project for more than a decade. He said the 1.5-megawatt array would have fulfilled 25 percent of the hospital’s daily energy needs, translating into a cost savings of $300,000 to $500,000 a year.

While arguments against the project involved its location, Councilor Nathan Duckett, who cast the lone vote in support of the plan, pointed out that industrial projects already pervade that part of town.

“Our job was simply to look at the land and decide whether the use of the land was appropriate,” Duckett said in April. “It’s a vacant dirt field, after all.”

Duckett added that the existing businesses aren’t going to move, and it’s unrealistic to think the area would be developed into residential or office spaces.

The U-shaped parcel borders an oil yard and a FedEx freight center. A waste water treatment plant and electric substation sit across the street to the south.

The hospital has butted heads with the city over the solar project before. In September 2015, the hospital unsuccessfully lobbied for reduced electric rates for large-scale solar producers. Councilors voted against the rate on the basis that the savings would amount to a subsidy.

“But so is the oil and gas industry. They’ve been around a long time and still enjoy subsidies,” he said.

Receiving the go-ahead for installation, however, appears to be the challenge.

When councilors reconsider the issue Tuesday, there will be no opportunity to review new evidence or hear public comment. The plan's approval would only require one more councilor to vote for the zoning change. Mayor Tommy Roberts, who casts a vote in case of a tie, has consistently said he supports the solar project.

“My perspective has not changed,” Roberts said. “I believe it’s a legitimate use of the land.”