Farmington Regional Animal Shelter will dedicate its new animal transport van during the Bark in the Park celebration.

The $40,000 animal transport van was donated to the shelter by the Farmington Regional Animal Shelter Foundation 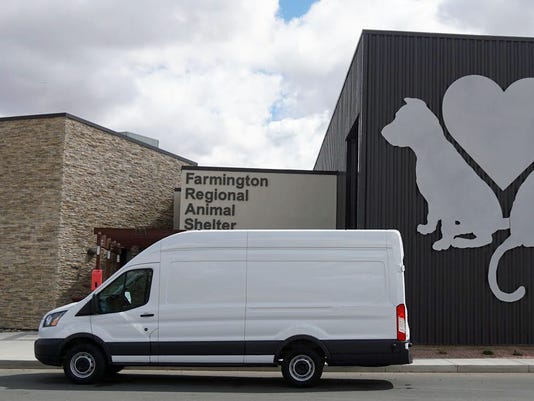 FARMINGTON — The Farmington Regional Animal Shelter will dedicate its new animal transport van during the Bark in the Park celebration Saturday.

Bark in the Park is an annual event that provides pet owners information about resources for their animals. Animal-focused businesses and organizations, such as rescues, groomers and trainers, set up booths in Animas Park for the event.

The animal transport van was donated to the shelter by the Farmington Regional Animal Shelter Foundation. The vehicle will be dedicated at noon Saturday at the shelter, 133 Browning Parkway.

The van cost about $40,000, said Steve Ellison, the foundation's treasurer. The money comes from donations and the Ales for Tales fundraiser in September, which raised $33,000, according to Ellison.

“Transports are the No. 1 lifesaving tool here at the shelter.”

Ellison, who also volunteers as a transport driver for the shelter, said the larger van makes it easier to load and unload animals. Because it can carry more animals, the new van also allows more animals to be transported in fewer trips.

"Transports are the No. 1 lifesaving tool here at the shelter," said Stacie Voss, the shelter director.

Each year, more than 2,000 animals are transported from the Farmington shelter to other shelters, said Amber Francisco, volunteer coordinator for the shelter.

In addition to dedicating the new van, Saturday's Bark in the Park will include other festivities, such as the Doggie Dash, which starts at 10 a.m.

The free two-mile run/walk will take dogs and their owners on trails along the Animas River in Animas and Berg Parks. People who register in advance at fmtn.org receive a T-shirt and a bandanna for their pet.