A two-vehicle crash shut down traffic on West Murray Drive and caused two dozen gallons of diesel fuel to spill. 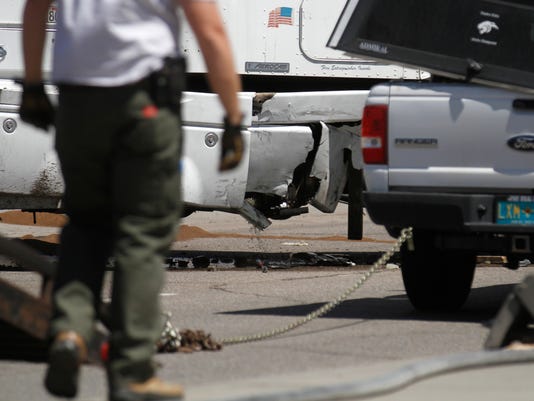 Diesel fuel leaks on Wednesday from a semitrailer after a crash on West Murray Drive between South Auburn Avenue and South Lake Street in Farmington.(Photo: Jon Austria/The Daily Times)Buy Photo

FARMINGTON — A two-vehicle crash shut down traffic on West Murray Drive this afternoon and caused approximately two dozen gallons of diesel fuel to spill into nearby gutters.

Farmington police were dispatched at about 1 p.m. to West Murray Drive between South Auburn Avenue and South Lake Street in response to the crash.

Monfils said the semitrailer was attempting to perform a U-turn at the time of the crash. 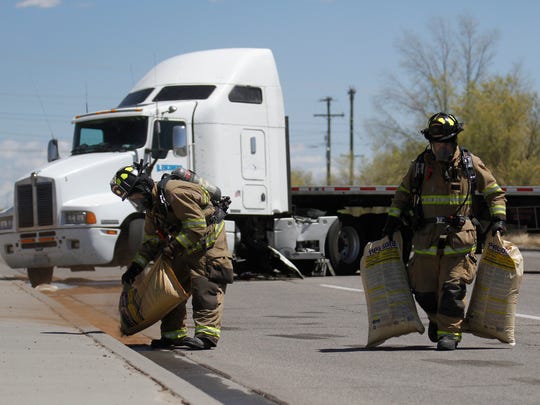 Farmington Fire Department crews clean up a fuel leak after a crash between a semitrailer and a pick-up truck on West Murray Drive between South Auburn Avenue and South Lake Street in Farmington. (Photo: Jon Austria/The Daily Times)

Police said no one was injured in the wreck. But the pick-up truck punctured the semitrailer's fuel tank, causing approximately 20 to 30 gallons of diesel fuel to spill into the street and nearby gutters, according to Farmington Fire Department Battalion Chief Andy Ebner.

Ebner said firefighters used a hydrocarbon absorbent to stop most of the fuel before it emptied into city sewers, but about 15 gallons of it remained pooled underneath the semitrailer.

He said a fire crew would vacuum up that fuel and dispose of it.

Traffic on East Murray Drive was diverted for more than an hour as firefighters and police worked to clear the scene.

Monfils said the driver of the semitrailer would be ticketed.