FARMINGTON – A line of children and their families stretched across Sycamore Park on Friday in preparation for the annual Easter EGGstravaganza.

Matthew Werito, 8, shakes a plastic Easter egg to see if there's anything in it during the Easter EGGstravaganza on Friday at the Sycamore Park Community Center. Steve Lewis/The Daily Times
Fullscreen

The Easter Bunny dances with kids during the Easter EGGstravaganza on March 25 at the Sycamore Park Community Center. Steve Lewis/The Daily Times
Fullscreen

The anxious children clutched buckets, baskets and bags that they hoped to fill with the colorful, candy-stuffed plastic eggs littering the lawn and playground in front of them. They awaited the sound of a horn that would signal the start of the Easter egg hunt.

After the horn sounded, it was only a matter of minutes before the Easter eggs had been collected and families gathered to eat the candy.

Antoinette Gray placed her youngest child, Iina Pine, 1, in a circle of plastic eggs during the hunt to make it easier for the toddler to collect the treats.

"She got a little scared by all the people," Gray said.

But soon Iina stopped noticing the crowd surrounding her and started to pick up the eggs.

"She realized what was going on," her mother said.

Gray and her four children attended the hunt with her sister, Alberta Gray, and her three children. The Farmington residents have attended the event for the past five years and consider it an annual tradition.

The egg hunt is divided into age groups, and Iina hunted for eggs in the same section at the southern end of Sycamore Park as her sister and cousin.

Alberta Gray said it helps the younger children to have them divided by age group.

"The little ones don't get trampled by the older ones," she said. 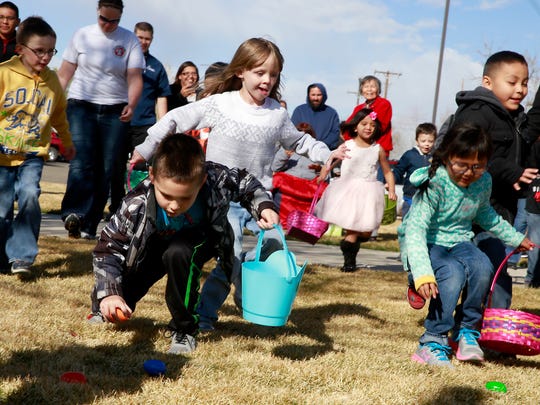 "We recycle our eggs, too," Alberta Gray said. "We use them for our Easter egg hunt."