Officials from HUD completed a site review of Apple Ridge Apartments in December. 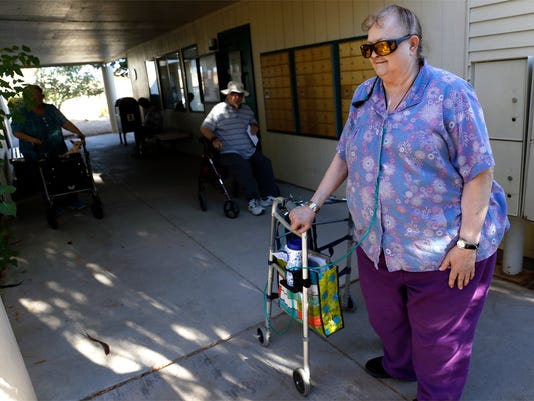 FARMINGTON — City councilors on Tuesday were informed the U.S. Department of Housing and Urban Development has completed its report on Apple Ridge Apartments.

HUD officials performed a two-day site review of the 80-unit apartment complex in December, after complaints were made about criminal activity, dilapidated buildings and mismanagement.

Councilors Mary Fischer and Gayla McCulloch, city personnel and a representative of U.S. Rep. Ben Ray Luján, D-N.M., participated in a telephone conference call with HUD representatives on the report prior to Tuesday's council work session.

The apartment complex, located at 1600 Cliffside Drive, provides taxpayer-subsidized housing for people with disabilities and seniors age 62 and older. It is owned by Albuquerque-based Yes Housing Inc. and managed by Dunlap & Magee, of Phoenix.

Fischer said during the work session that HUD officials continue to hold the position there are no issues or problems at Apple Ridge and stated the units are well-maintained and well-managed.

“Needless to say, I was quite disappointed in their findings,” Fischer said.

She added HUD continues to have preconceive notions about the complex and view complaints as non-major, despite the conditions of the apartments and issues documented in writing and photographs.

McCulloch said HUD seemed to be blame the handful of residents who complained about the complex, rather than closely examining their problems and concerns.

In an interview after the work session, Fischer said the conference call lasted 30 minutes and HUD did not disclose any details about the report findings.

HUD spokeswoman Patricia Campbell said in an email she cannot discuss the report until it has been finalized and received by the apartment management.

Also during the work session, councilors unanimously approved the notice of names of candidates running in the March 1 municipal election as well as the designated polling places.

Voters who are eligible to vote by absentee ballot may pick up an application for a ballot from the city clerk.

Absentee ballot applications are due by 5 p.m. on Feb. 26 and absentee ballots will be accepted until 7 p.m. on March 1.

There will be no early voting on Feb. 15 due to Presidents Day.

The council was scheduled to receive a presentation on the audit report for fiscal year 2015 but Mayor Tommy Roberts informed councilors the representative from Moss Adams LLP could not attend the meeting due to illness.

The report presentation was moved to the Feb. 16 work session.