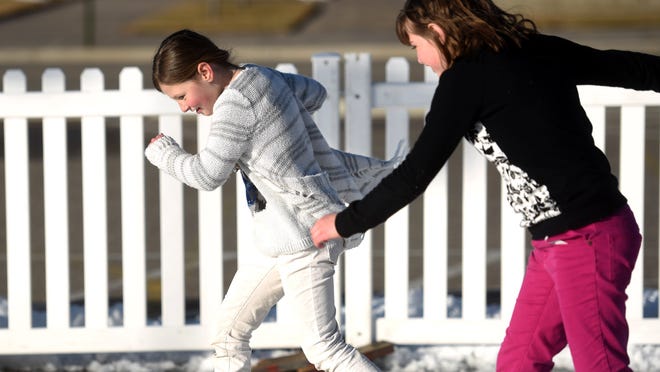 FARMINGTON – As a way of celebrating her daughter's birthday Saturday, Kendra Bruington decided to have a small party at the ice skating rink just north of downtown.

"I was just trying to figure out something to do for her 10th birthday since it's kind of a special birthday," Bruington said.

The rink fit in perfectly with the Disney movie "Frozen" theme of the party for Jacey Bruington, and the small group of children spent the afternoon skating.

Saturday was the final day the rink was open, but Farmington Civic Center officials hope it becomes an annual tradition. The civic center spent about $15,000 to bring in the synthetic ice rink and keep it here for about a month. During that time, more than 1,300 people visited the rink, according to Civic Center Director Lisa Hutchens.

She is now working on a contract to bring an even larger ice skating rink to Farmington next year.

"We got a lot of positive feedback," Hutchens said.

Bruington was joined by Stephanie Rousset as they supervised Jacey's birthday party. The two women commented on the synthetic ice used for the rink.

"It makes it really good for first-time skaters," Rousset said.

Jacey also enjoyed the party and the ice rink. While it was her first time to visit the rink, she has skated in the past and enjoys it.

"I like moving without having to walk," she said.

While the civic center did not make money off the rink, Hutchens said that was not the point.