Noncertified companies could face fine of $100 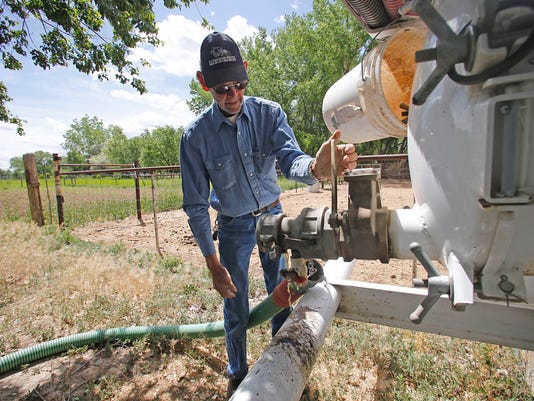 Don Moats, owner of D.J.'s Backhoe Service, works on a septic tank at a home in Fruitland in May. Most San Juan County septic-pumping companies have become certified through a state agency, but one has not.(Photo: The Daily Times file)Buy Photo

FARMINGTON — The New Mexico Environment Department has begun the process of fining the last few companies in San Juan County that haven’t become certified through the state to pump out septic tanks.

But Animas Septic Service owner William “Ougie” Thompson provided a copy of his certificate to The Daily Times dated Sept. 18, and Jim Vincent, the department’s liquid waste manager, said in an email that Thompson is “essentially certified.”

Once he is, “we will be down to three,” Vincent said.

The last step for Thompson to become completely certified is to complete an application with the department to register his company under its new name, Vincent said.

The department told 18 septic pumping companies in the county about the certification requirements, and spokeswoman Allison Scott Majure said it is holding them accountable. The department initially identified more septic pumpers, but several of them operate portable restrooms and other businesses instead.

If the remaining septic pumpers don’t become certified, the legal process the department has begun will result in them being fined $100 each.

The department began enforcing the certification requirement after local officials with the San Juan Soil and Water Conservation District and the San Juan Watershed Group released a study that found significant human fecal pollution in the county’s rivers.

Some officials have said leaking septic systems are to blame. Others point to illegal dumping.