FARMINGTON — Lawmakers from New Mexico and Colorado introduced legislation Tuesday to help victims of the Gold... 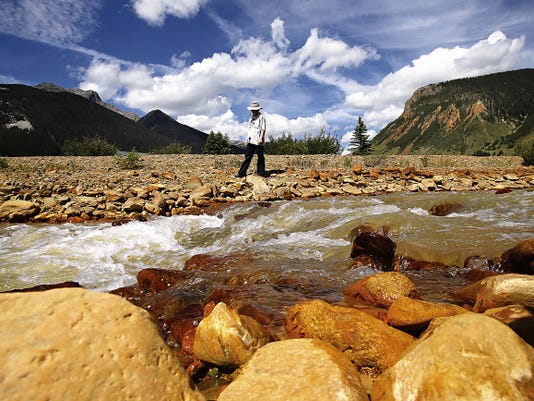 Melanie Bergolc, of Silverton, Colo., walks on Aug. 10 along the banks of Cement Creek in Silverton, days after the Gold King Mine spill released toxic wastewater into the Animas River.(Photo: Daily Times file photo)

The Gold King Mine Spill Recovery Act of 2015 would create a federal office to handle financial claims and outline what claims are allowed under the Federal Tort Claims Act, according to the Senate bill.

Under the proposed law, allowable damages would include losses to property, business or finances.

The legislation would also require the U.S. Environmental Protection Agency to work with affected states and Native American tribes to develop, fund and implement long-term monitoring of the Animas and San Juan rivers, the bill states.

The bill requires the EPA to make water and soil testing data public and provide clear and meaningful comparisons between the data and relevant water quality standards.

Finally, the legislation would require the EPA to identify the most dangerous abandoned and inactive mines and establish a priority plan to remediate them.

Federal agencies would need to develop contingency plans and alert communities and agencies impacted by the remediation work before it could begin, according to the bill.

In a phone call with reporters Tuesday morning, Udall called the abandoned mines that pockmark the United States "ticking time bombs" and said the EPA needs a long-term strategy for cleanup.

He said mines in the Upper Animas Mining District have for years spewed polluted water into the Animas River, an issue the EPA is working with local stakeholders and state agencies to address.

"I've supported the Navajo Nation on pushing for a Superfund site," Udall said. "I think that is the thing that could really make a difference here. It could unlock additional revenue and make sure they get that plan in place as quickly as possible."

He said, however, the main purpose of the bill is to compensate the farmers, ranchers, residents and businesses hurt by the Aug. 5 spill that released more than 3 million gallons of toxic wastewater into the Animas River.

Udall said he and Heinrich still plan to introduce a second bill to reform the General Mining Law of 1872. The bill would require mining companies to pay a royalty for minerals harvested from public land, similar to oil-and-gas and coal companies. The royalty would help pay to remediate abandoned mines.

The legislation comes after several weeks of contentious congressional hearings, during which the EPA has been lambasted by lawmakers for its slow response to the spill.

During a joint congressional hearing Thursday, New Mexico Environment Secretary Ryan Flynn accused the federal agency of releasing "cherry-picked" water sampling data in the immediate aftermath of the spill to downplay its severity.

He said the agency failed to include information about arsenic levels in data supplied after the spill and also provided misleading graphs that suggested lead and cadmium concentrations were below safe drinking water standards.

Flynn also claimed Thursday that EPA officials initially refused to release sediment sampling data, because it contained "confidential information" they feared would be made public through a records request under state law.