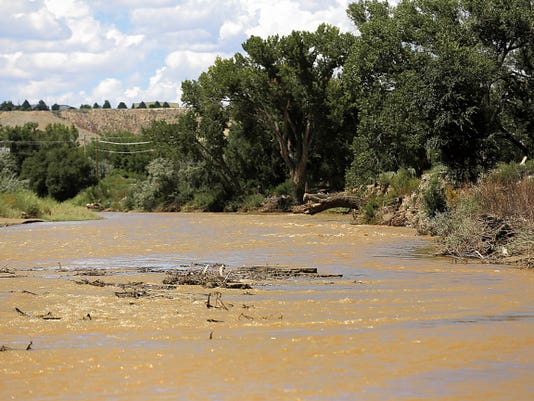 The Animas River is seen Saturday near its confluence with the San Juan River in Farmington.(Photo: Jon Austria &#8212; The Daily Times)Buy Photo

FARMINGTON — A high ranking state official on Saturday said he holds the Environmental Protection Agency responsible for a containment wall breach at a high-altitude mine in Southwest Colorado that released more than 1 million gallons of toxic metal-laden water into the Animas River.

"We will not allow EPA to leave until they have compensated us," Environment Department Cabinet Secretary Ryan Flynn said during a town hall meeting in Farmington.

Flynn talked about previous lawsuits filed by New Mexico against the federal agency, but an Environment Department spokeswoman said no such action has been taken related to the current incident.

More than 200 local residents attended the meeting in the city's Civic Center to learn more about the spill. Many in the audience shouted at an EPA official as he tried to speak, asking for information about the heavy metals in the river and why they haven't released those details.

At about 10:30 a.m. on Wednesday, an EPA team breached a debris dam near the mouth of the Gold King Mine north of Silverton, Colo., releasing water contaminated with heavy metals. But state officials say the mine purged significantly more than 1 million gallons.

Mustard-colored water pulsed out of the area, flowing into Cement Creek, a tributary that runs through Silverton and into the Animas River. The plume of pollution entered Aztec early Saturday morning and Farmington later that morning. Officials expect it will reach the Utah border at about 5 a.m. on Monday and Lake Powell Wednesday evening.

Officials throughout the country have blasted the EPA over its handling of the spill. New Mexico Environment Department Cabinet Secretary Ryan Flynn said Friday that the EPA did not notify his department of the spill until almost 24 hours after they'd caused it, and he said their initial response to the disaster was cavalier and irresponsible.

Gov. Susana Martinez said in an appearance in Farmington on Saturday that the state's first notification of the spill came from Southern Ute Tribe officials.

"There's a lot of questions that our constituents have, and so many communities have as well, that we need to get rapid responses to," he said.

At the time of the meeting, the EPA had not released details about the concentration or composition of the toxic metals in the plume, which they believe include arsenic, lead, copper, aluminum and cadmium.

"That report needs to be made available immediately to our constituents," Luján said.

Mark Hayes, an EPA Region 6 on-scene coordinator, which covers San Juan County, said his department has contained the water that was still leaking at a rate of several hundred gallons a minute as of Friday afternoon.

Hayes said EPA Region 6's objective now is to collect samples in Aztec and Farmington to determine the level of heavy-metal contamination. He said the EPA does not have the necessary data yet to tell the public more about the pollution.

He asked the audience for patience.

"We're all going to get through this — together," he said.

In a telephone conference with reporters on Saturday afternoon, Shaun McGrath, EPA regional administrator, said information is being posted on the agency's website as soon as it is available but test results remain under evaluation.

He said discharge from the mine is now being captured in a sediment pond.

McGrath said four personnel from a federal contractor and the EPA were working at the site at the time of the breach.

When asked for the name of the company contracted by the EPA, McGrath paused then said, "I don't have that contractor's name." He then asked if other EPA officials had the name before saying that no one in the room had the information.

Ron Curry, EPA Region 6 regional administrator, said during the conference that the agency is providing continuous updates to state officials.

There are 1,221 domestic wells within about 1.5 miles of the river, but the data from the state Environment Department also include wells that are outside the floodplain.

Curry said his office will provide a mobile lab and a mobile headquarters at the San Juan County fairgrounds next week so residents can have well water tested.

Several sites at fire stations have been set up for people to get potable water.

Residents who get their drinking water from municipal lines, which carry water from city treatment plants, are safe, officials said.

A contractor that operates Farmington's water treatment plants tested the mustard colored water as it entered Farmington Saturday morning. Its pH was 7.8, "which was a big relief," said Ron Rosen, CH2M project director. That pH is close to neutral, almost the equivalent of sea water.

Clay particles cause much of the mustard hue in the plume, "but the items you cannot see are the ones we worry about," he said. Those are the heavy metals, he said.

The uncertainty created by the lack of specific information was causing concern for irrigators like state Rep. Paul Bandy.

"We need it as soon as possible," he said.

While the rains helped water crops, irrigation water is needed or else there will be crop damage, Bandy said.

At the moment, no one is certain what kinds of danger the contaminated water poses.

Phyllis Benally, a Kirtland resident who was walking by the side of the river Saturday morning in Farmington's Berg Park, said she was thinking about the pollution washing through. At 6:30 a.m., she and her two friends were the only ones on the paved trails in the area.

Benally and the others said they worried about the brown ducks bobbing in the current. They also worried about the fish in the water, horses that drink from the river, stray cats and dogs that explore its banks, and people who don't have access to showers and bathe outside.

"I mean, that's people," she said. Tears formed in her eyes and she wiped her nose with a tissue.

Officials estimated that the plume crossing into New Mexico had stretched to 80 miles in length by the time it reached Farmington.

In another area along the river bank Saturday morning, people set up tripods to shoot photos. Others stooped to fill coffee mugs. But Bloomfield Fire Chief George Duncan leashed his yellow lab, Brewski, to a handrail by the river.

"It's very concerning," he said, explaining that residents of Colorado, New Mexico and Utah could be living with the cleanup for a long time. "It's a tragedy."

Others were less concerned. Barry Digman said he wishes people would remain calm until the EPA releases details about the contamination.

The spill is bad for the river, he said, but "this is not the Exxon Valdez crashing in the river."

For 20 years, Don Tinnin has walked along a three-mile stretch of the river four or five days a week, and he's seen its water in many conditions. But he's never seen the kind of yellow tint — intensifying as the main body of the plume arrived — that he saw Saturday.

He said the river's changed from when he was a kid and used to hunt fish in shallow pools with a pitchfork. Now there's bacteria from human feces in it, the Farmington resident said, citing a study released in February that detected the presence of human waste in the Animas and San Juan rivers. And now, he said, there's this.

"I think the river's taking a hit from people — there's no doubt about that," he said.

He expects it will pass. But the toxic metals — which are what worry him — may not pass as quickly, he said.

"Nothing like they had north of Durango. But that's in there," he said of the metals. "You know it's in there."

After Tinnin walked away, the yellow tint grew more noticeable. By 9 a.m. Saturday, murky water with sediment from Friday night's heavy rain had turned the same mustard hue of the water that crossed into New Mexico Friday.