Jury deliberations continue in case of brother accused of aiding and abetting in...

FARMINGTON — Defense attorneys and prosecutors presented closing statements Tuesday in a murder trial in which...

Jury deliberations continue in case of brother accused of aiding and abetting in... 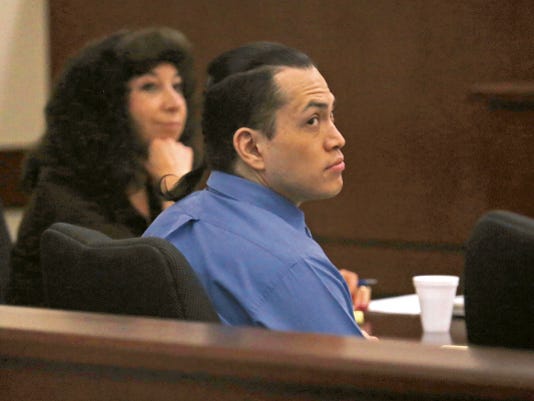 Luis Ramirez looks back on Tuesday during the final day of his trial at the Eleventh Judicial District Court in Aztec. Ramirez is accused of aiding and abetting his brother in the shooting death of Johnny "Benji" Vialpando Jr. in April 2013 at the Animas Valley Mall in Farmington.(Photo: Alexa Rogals &#8212; The Daily Times)Buy Photo

FARMINGTON — Defense attorneys and prosecutors presented closing statements Tuesday in a murder trial in which little of the evidence is in dispute.

Arlon Stoker, the attorney for Luis Ramirez, allowed the testimony of several state forensic experts to be read into the court record on Tuesday and waived his client's right to cross-examination, shortening what was expected to be a week-long trial into a two-day trial.

Stoker said he did so was because the testimony, from experts on guns, fingerprints and DNA, supported his defense.

"There is no physical evidence that ties my client to the shooting," he said.

Instead of challenging the state's evidence, Stoker argued in his closing statement that there was not enough of it to prove beyond a reasonable doubt that Luis Ramirez, 30, aided and abetted his brother, Alejandro Ramirez, in the slaying of Johnny "Benji" Vialpando Jr. in April 2013.

"This is a horrendous crime," Stoker said. "This shouldn't happen to anybody, but Luis didn't have anything to do with it. Alejandro did it, not Luis."

Earlier this year, Alejandro Ramirez was convicted of first-degree murder in Vialpando's death and is awaiting sentencing.

Stoker on Tuesday disputed the testimony of Benji Vialpando's wife and her three children, who were in the vehicle with the 25-year-old truck driver when he was shot nine times by Alejandro Ramirez outside the Animas Valley Mall in Farmington on April 27, 2013.

The wife, Rhiannon Vialpando, testified Monday that Alejandro Ramirez stopped her vehicle at approximately 4:30 p.m. as she was about to leave the mall parking lot and made small talk with her husband through the passenger side window.

Rhiannon Vialpando told the jury Alejandro Ramirez asked for a ride, but then said he did not need one when his brother pulled up in a white SUV behind the Vialpandos' vehicle.

Rhiannon Vialpando said Alejandro Ramirez went to his brother's vehicle, exchanged an unknown item with him and then came back and shot her husband to death.

"Johnny would have been here today if the defendant had not blocked the family in, handed Alejandro a firearm and watched as he put nine bullets into Johnny," Cowen said.

Stoker did not dispute that Luis Ramirez was at the scene, but said Alejandro Ramirez had the murder weapon on his person the entire time.

"Not one witness can tell you what was exchanged," Stoker pointed out in his closing statement. "It's just as easy for Alejandro to hand (Luis Ramirez) his cellphone and say, 'One second. I'll be back.'"

Stoker also told the jury that crime scene photos showed that the Vialpandos' vehicle rolled backward and struck a vehicle parked behind it — not Luis Ramirez's SUV — after the shooting.

"He is not right behind them, because if he was, they would hit his vehicle," Stoker said.

Co-prosecutor Marcus Blais pointed out in his rebuttal that Luis Ramirez could have parked in a different location if he did not intend to block in the Vialpandos' vehicle.

"It was intentional," Blais said. "He knew what he was there to do."

Blais also pointed out that Luis Ramirez sped off from the scene with his brother beside him, despite watching Alejandro Ramirez shoot Benji Vialpando to death.

The jury deliberated for approximately an hour Tuesday before Judge John Dean dismissed them. The jury will reconvene Wednesday.