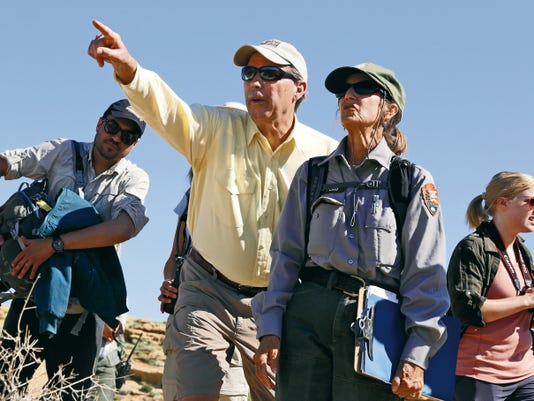 NAGEEZI — New Mexico Sen. Tom Udall and Department of the Interior Deputy Secretary Mike Connor hiked along the great houses of Chaco Culture National Historical Park on Monday to hear from park officials and tour the archaeological and cultural sites in the park.

The park visit by Udall and Connor with officials from the park, the Bureau of Indian Affairs and the Bureau of Land Management occurred as the BLM works on a new draft amendment resource management plan for the region, which will guide the federal government's regulations and leasing policies in the area for the oil and gas industry.

The visit was prompted by a May 12 letter from Udall, a New Mexico Democrat, to Interior Secretary Sally Jewell, calling for greater attention to the issues surrounding increased development in the San Juan Basin over the last few years. That development has been accelerated largely by advances in horizontal drilling technology that has made hydraulic fracturing a mile below the surface in the nearby Mancos and Gallup plays possible for drilling companies.

Larry Turk, Chaco park and Aztec Ruins superintendent, told Udall and Connor he would value a larger zone of protection for the ancient Puebloan sites.

Turk was concerned about potential impacts on the air, water, and views as well as from noise and light pollution. In 2013, Chaco received the designation of an International Dark Sky Park, one of only four in the national parks system. Turk has said that park officials have noticed a diminution of the dark-sky experience at the park from nighttime flaring by nearby oil and gas activity. Turk has also expressed concerns over visual and noise-based obstructions from industry activity occurring around the park's boundaries that he says confuse or diminish the visitor's experience.

Turk said he would like to see the BLM's decision last year — after protests by environmentalists — to temporarily stop issuing new leases within a 10-mile radius of the park made permanent.

"If we could preserve that 10 miles around the park, then we could preserve that cultural landscape for future generations," Turk said. "We know it's not realistic to reach all the way to Farmington. (But) there's great houses and sites all over. You can stand anywhere in San Juan County and throw a rock and hit a site. It's huge."

Turk said a current project to study and map the extensive 50,000-square-mile, Chacoan world — done by the University of Colorado at Boulder and a group of Chaco experts — is expected to provide full mapping of the landscape sometime next year. The results will help inform the Interior Department's reexamination of the vast cultural and archaeological resources of the region, he said.

Udall said the visit to the World Heritage site — one of 22 in the U.S. — was an opportunity to reacquaint himself and other officials with the park as he walks a fine line between satisfying the people concerned with preserving the state's cultural resources, and people who favor increased oil and gas production.

"Today for me is trying to see if we can find the balance going forward," Udall said while hiking the park's Pueblo Alto trail. "Many of the government agencies are working hard to do that. But it's always good to revisit and take a look and ask questions (and see) where we're headed in the future. Just being out here and seeing all this history, you know how important it is and, obviously, we have to have that be part of the equation."

"We do have to be cautious about protecting this great resource ... I think it's time to revisit, given the extent of the oil and gas resources here, which is very important. But the other interests that are involved, we need to try and do that development as smartly as possible."

Connor said the BLM's draft amendment of its resource management plan and environmental impact statement will hopefully be ready by the end of the year or early 2016. He said lawsuits filed by environmental groups making the argument that the cultural, traditional and archaeological interests of the region are threatened by increased development have slowed the process.

During Monday's hike, Connor and Udall listened to Dabney Ford, chief of cultural resources at Chaco, explain the park's Chacoan sites, including Pueblo Alto, a great house last excavated in 1982.

"No decisions have been made or any changes from the existing 2003 RMP, but we'll continue to engage folks in that dialogue," Connor said. "There's our special responsibility to consult with the chapters, the pueblos and the Navajo Nation as a whole. It's absolutely imperative to hear their voices and concerns before any decisions are made."

James Fenton is the business editor of The Daily Times. He can be reached at 505-564-4621 and jfenton@daily-times.com. Follow him @fentondt on Twitter.