The county and members of the community are providing emergency water services to Crouch Mesa residents. 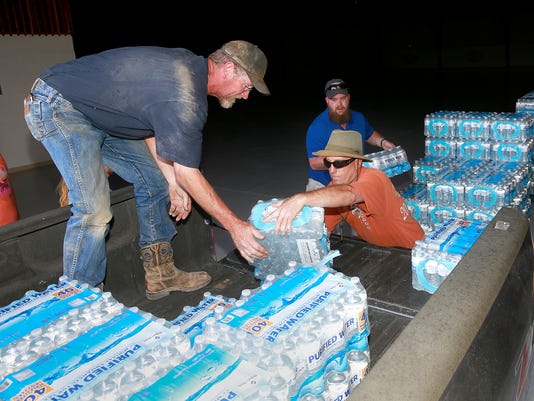 FARMINGTON – As many Crouch Mesa residents face triple-digit temperatures without access to drinking water, community groups are banding together to provide some essential services.

The San Juan County Office of Emergency Management has established free showers and water filling stations at McGee Park and in Aztec. Concerned citizens are also providing delivery services to those in need.

Mary Trujillo said she and fellow Crouch Mesa residents have been working non-stop to fill buckets and containers for the elderly and disabled.

The area’s water system, owned and operated by the AV Water company, has been under a boil advisory since May 25. Over the weekend, system failures cut off supplies to several neighborhoods, including Panorama Heights. 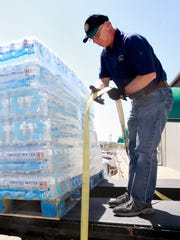 Charles Rash with the San Juan County Office of Emergency Management unloads pallets of bottled water on Monday at McGee Park. The water is for Crouch Mesa residents who don't have access to drinking water. (Photo: Steve Lewis/The Daily Times)

“We’ve got people with no water at all,” she said. “That makes it an emergency situation.”

Residents can receive water 24 hours a day at the RV filling stations in McGee Park and in front of the Aztec Police Department. Showers are available from 5 a.m. to 8 p.m. at McGee Park.

AV Water Operations Manager Thomas Barrow said this afternoon  that he wasn't certain what caused the breakdown, but crews are working to refill storage tanks and restore services.

The issue comes as the company's treatment plant continues to produce cloudy water, resulting in a boil advisory that has lasted nearly a month. AV Water has resorted to buying water from the city of Farmington, and distributing it to customers.

The city has authorized an emergency agreement, and the City Council will vote on a long-term contract on Tuesday .

Meanwhile, frustrated Crouch Mesa residents have formed a Facebook group to protest the water company. Customers' concerns have revolved around a lack of transparency during the boil advisories and consistent service problems, despite the fact they pay a 10-percent capital improvement fee on each bill.

"Everybody at this point wants to get away from AV Water," group member Karen Lamprecht said. "We don't even know if we're getting the full story."

Allison Scott Majure, spokeswoman with the New Mexico Environment Department, said in an email that the department's Drinking Water Quality Bureau has "serious concerns" about the water system.

"An investigation is underway," she said.

For more information on the boil advisory and water services visit the county's Office of Emergency Management website at http://www.sjcoem.com/. 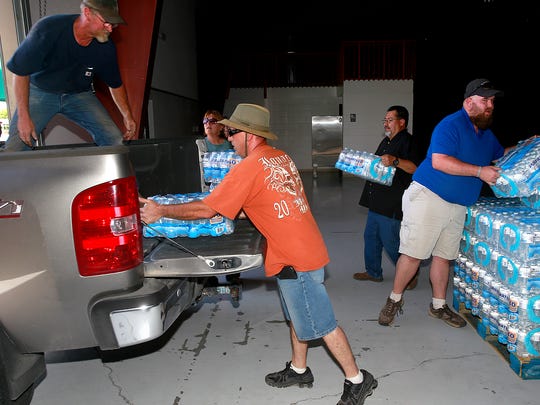 Mike Melott, left, Jason Martinez, center, and Robert McGimsey, right, load up water for their neighbors in Crouch Mesa on Monday at McGee Park. In back is Mike Mestas with the San Juan County Office of Emergency Management. (Photo: Steve Lewis/The Daily Times)