George Walter, Tony Herrera and David Aguirre are running for Bloomfield City Council. Two of them will be elected to the position. 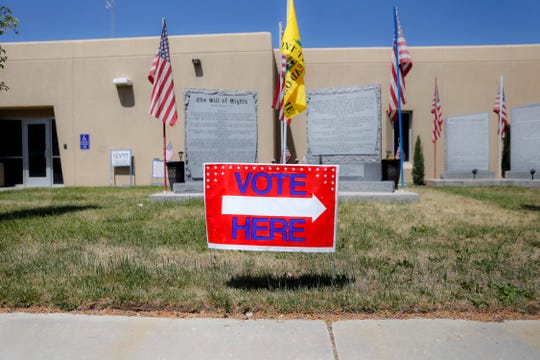 A voting sign points in the direction of a polling station, Tuesday, June 5, 2018 at Bloomfield City Hall. (Photo: The Daily Times file photo)

FARMINGTON — With no incumbent candidate in the race, three Bloomfield residents are vying for two seats on the Bloomfield City Council.

The Bloomfield City Council elections are March 3, although early voting is currently underway through the end of the month. Registered voters can cast ballots at Bloomfield City Hall, 915 N. 1st St.

Community members can meet the candidates from 6 to 8 p.m. Feb. 19 at the Bloomfield Multicultural Center.

David Aguirre describes himself as a God-fearing, Bloomfield Bobcat loving resident who wants to serve as on the City Council as a way to give back to his community.

He said he has been pretty involved in his church community at St. Mary’s Catholic Church, but felt like he was lacking something. When people approached him about running for City Council, he decided to pray about it. After prayer and consideration, Aguirre entered the race.

He said he would work to make Bloomfield a better and safer place, including by supporting the Bloomfield police and fire departments.

Aguirre has lived in Bloomfield most of his life. He attended college for two years at the University of New Mexico and San Juan College before he was “introduced to oil field life.” While he started as a mechanic, he now works in operations.

That traffic can create safety challenges and Aguirre said traffic safety needs to be a priority. He said the city should also work to reduce the crime rate.

2020 Election: Meet the candidates vying for the District 1 seat on Aztec City Commission

George Walter said he has a strong gut feeling that “we the City of Bloomfield, our families, friends and all who visit can have a better tomorrow.”

He has lived in Bloomfield for 17 years and been an active community member. He co-coordinated the 5th of July celebrations, which he describes as the best show in the Four Corners, and has participated in parent advisory council for various of the schools as well as the Bloomfield Citizens Police Advisory Committee and citizen’s police academy. He has also been a part of the economic development committee and a member of NM Invents, a local group of inventors.

Walter is currently branch manager at Crane Service Inc. and previously served as district manager at Waste Management. He said his business experience has given him an understanding of fiscal responsibility and making tough decisions.

“I have been working in business here locally for several companies over my career and have learned a lot about what moves us to action, what may be missing, and what we do well," Walter said. "Ours is a community of resilience and character. We deserve a quality of life that can match our desire to live the good life right here in Bloomfield. All Bloomfield residents, families, and businesses should be able to benefit from sound and responsible City Council decisions and actions.”

He sent an email with a list of challenges Bloomfield faces including:

Tony Herrera is an engineer with the Bloomfield Fire Department. He did not respond to phone calls or email by deadline Feb. 7.