A fatal fire last month is being investigated as possibly suspicious because the man who died was one of the alleged victims of a racketeering ring. 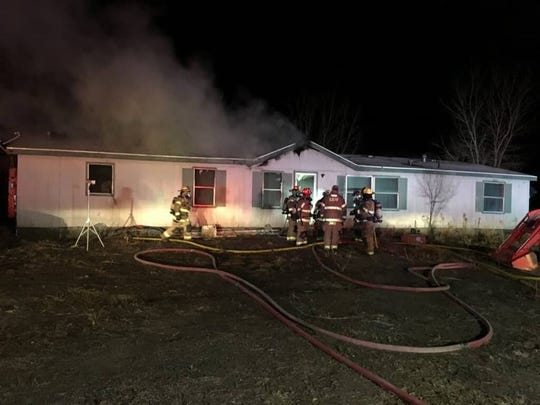 FARMINGTON — The San Juan County Sheriff's Office is investigating a fatal fire in late January as possibly suspicious because the man who died was one of the victims in an alleged racketeering ring.

Gordon Jones, 47, was found deceased inside the residence.

The cause of the fire is still under investigation, according to Detective Lt. Kyle Lincoln.

Most of the damage from the fire was contained to the master bedroom, where Jones was found by investigators, Lincoln said.

There was also heavy smoke damage throughout the entire house.

Investigators are awaiting results from the Office of the Medical Investigator to determine Jones' cause of death.

Lincoln said the Sheriff's Office was working different cases where Jones was a victim and felt the fire was "very coincidental" to the other cases.

Gordon spoke to a detective on Jan. 22 on the telephone about the theft of 78 firearms from a safe in his residence, according to court documents. The phone interview occurred four days before the fire.

Three suspects had been arrested and charged in connection to the firearms theft.

Stephen Dye is accused of 78 counts of conspiracy to commit larceny of a firearm, according to court records.

The three men are among six suspects accused of racketeering and allegedly engaging in crimes including extortion and methamphetamine trafficking.

Robert Walker and John Williams were also arrested in connection to the alleged racketeering ring.

An arrest warrant was issued on Feb. 8 for Derek Murphy in connection to the racketeering ring, according to Lincoln.

The investigation into the fire and the racketeering ring are being handled as separate cases, Lincoln said.

Anyone with information about the investigation into the fire is asked to call 505-333-7878 and ask for Det. Jacob Courtney.