Infrastructure continues to fail in Harvest Gold, emphasizing the need for the newly completed interconnection.

FARMINGTON — After more than a year of being under a boil-water advisory, the residents of the Harvest Gold subdivision near Bloomfield soon could have clean water flowing from their taps.

When reached by phone today, Bloomfield public works director Jason Thomas said the city of Bloomfield is filling the water tank in the Harvest Gold subdivision with water. Thomas said the workers are still running tests on the system.

While the connection with Bloomfield has been completed, the boil-water advisory issued by the New Mexico Environment Department will remain in effect until the lines can be flushed and water samples show that the water meets safe standards.

The water from Bloomfield is reaching the subdivision as other infrastructure in the Harvest Gold system fails. 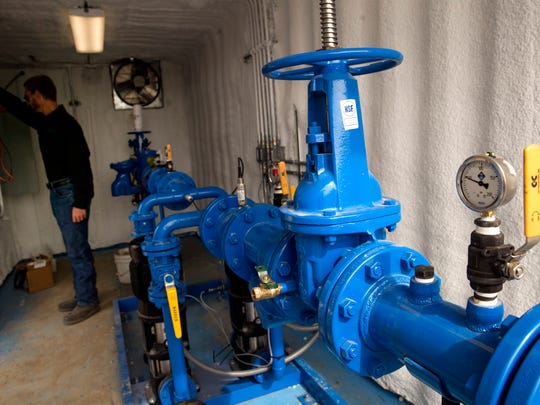 “This represents one of the most challenging water projects I have ever dealt with.”

Commissioner Lynda Lovejoy issued a bench request last week to get the information needed for the PRC to close the transfer of assets case.

"This represents one of the most challenging water projects I have ever dealt with," Lovejoy said in a press release.

The case was challenging because of the condition and age of the infrastructure, AV Water's poor financial condition and the obstacles that had to be overcome before state assistance could be requested. Because AV Water is a privately owned company, the state's anti-donation clause prevented public funds from being spent on the system.

Former owner Mark Iuppenlatz testified before the PRC last year that the company was on the verge of bankruptcy, and Apple Orchard was formed to take over the Harvest Gold system. Because Apple Orchard is a community-owned utility, it was able to receive state assistance for the Bloomfield connection, as well as planned infrastructure improvements.

The PRC does not oversee mutual domestic water utilities, but it is continuing its investigation into AV Water. AV Water still owns the Morningstar system, which serves the Crouch Mesa area and which also was under a boil-water advisory recently because of problems with its infrastructure.

Iuppenlatz informed the PRC in a letter this week that he is no longer associated with AV Water. He said Julia McCullough now is responsible for the utility. Iuppenlatz did not provide information about McCullough's previous involvement with AV Water. PRC counsel Russel Fisk told the commissioners about the change during the Wednesday meeting. The meetings are streamed live from Santa Fe online at nmprc.state.nm.us.

Here are some steps for boiling contaminated water to keep you and your family safe from dangerous bacteria.