The Bloomfield Fitness Center will remain open with an increase in membership rates and new security measures.

Scott Mahon, 87, works out in the Fitness Center on Nov. 16 at the Bloomfield Cultural Complex. The center was scheduled to be closed Thursday, but the Bloomfield City Council voted to keep it open.(Photo: Daily Times file photo)

FARMINGTON — The Fitness Center inside the Bloomfield Cultural Complex will remain open.

Members of the Bloomfield City Council approved an increase in membership rates and a plan to install a keyless entry system during their meeting Monday night.

The city is trying to balance its budget as the decline in the oil and gas industry has reduced Bloomfield's gross receipts tax revenue.

Members of the community spoke in support of the facility during a Nov. 14 council meeting, prompting councilors to consider options to keep it open.

City Councilor DeLaws Lindsay said in a telephone interview today he was willing to give the plan a shot because the Fitness Center is a real benefit for the area.

“I think it’s an asset to the community,” Lindsay said.

Membership rates will increase an average of 30 percent when compared to the current fees, according to a memo from City Manager Eric Strahl.

Some of the changes included increasing the annual memberships for individuals and seniors by $150. For corporate memberships, the individual annual rate increased $30, and the family rate went up $40.

New plans were also created, including a six-month individual membership plan, a monthly couples plan, and a three-month and monthly plan for seniors. 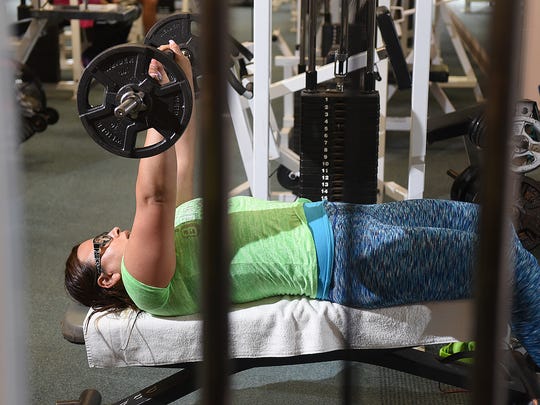 Maria Adame works out in the Fitness Center on Nov. 16 at the Bloomfield Cultural Complex. (Photo: Daily Times file photo)

The rate increases could generate $19,000 in additional annual revenue, based on the current count of 344 Fitness Center memberships.

Strahl said in a telephone interview today  that the fitness center currently generates about $40,000 in revenue, which does not cover the cost of its operation.

With the rate increase, the projected annual revenue of about $59,000 will cover the cost of operating the fitness center. Members will see the rate increase the next time they renew their plan.

Councilors also approved installing a keyless entry system that will allow members to access the fitness center since the facility will operate with little to no staff members monitoring the people exercising.

The systems will be installed on the Fitness Center’s entrance on the east side of the building and on the center’s main entrance inside the lobby of the Cultural Complex.

Members will use the system to access the facility when the Cultural Complex building is closed, Strahl said.

City officials are finalizing the costs associated with installing the system.

Strahl said the city is expected to keep one part-time position for the Fitness Center to help monitor the facility and use of the gym on Wednesday evenings for basketball.