Bloomfield will weigh how to spend tax revenue

Bloomfield has not yet decided how to spend the additional revenue from a tax increase voters approved on Tuesday.

Bloomfield will weigh how to spend tax revenue

Sebastian Sisneros, 4, watches as his grandmother, Dolores Conyers, places her ballot in a voting tabulator on Tuesday at the Bloomfield Municipal Complex. Residents voted to approve a tax increase that will generate additional revenue for the city's operational costs.(Photo: Daily Times file photo)

FARMINGTON — Although Bloomfield voters on Tuesday approved a tax increase, officials say how that additional revenue will be spent remains uncertain.

"The interesting part to watch on this will be how it gets allocated," said Bloomfield Police Department Chief Randy Foster, who hopes a portion of that money will help the city's police force.

Revenue from the tax increase will go to the city's general fund, and the City Council will meet next year to decide how it will be spent. The tax increase goes into effect on Jan. 1, and the revenue is expected to be distributed in March.

The special election to implement a one-fourth of 1 percent gross receipts tax came as the city worked to cut about $1.3 million from its fiscal year 2017 budget. Cuts included a 3.46 percent pay cut for city employees. The city also restructured its employee insurance policy to include higher premiums.

The City Council approved the election in April after Bloomfield Fire Department officials campaigned for a tax increase. The fire department hoped the additional revenue would cover the salaries of firefighters who had been paid for the past two years through a federal grant.

Now, the department is unsure how much longer it can continue paying its firefighters, and officials hope to work with the city to keep supplying those salaries, according to assistant fire chief John Mohler.

"(The firefighters) are all hopeful that the vote shows the city supports the fire department," Mohler said.

Before it received the grant in 2014, the fire department was staffed by volunteers, but officials say volunteers cannot perform all the duties of the paid staff.

"Times have changed, and it's hard to get volunteers," Mohler said. "We need all the help we can get." 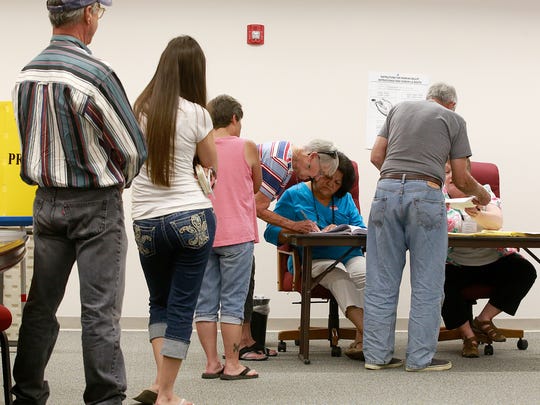 Voters line up on Tuesday inside the Bloomfield Municipal Complex. Voters approved a tax increase that will generate additional revenue for the city's operational costs. (Photo: Daily Times file photo)

Mayor Scott Eckstein said the council will likely consider using additional tax revenue to help the police and fire departments. But, Eckstein said, the city does not know how much revenue will be generated.

"That will fluctuate with the economy," he said.

“The interesting part to watch on this will be how it gets allocated.”

Foster said that over the past two years the police department has cut positions and relied on high-mileage vehicles to save money.

To have enough officers to patrol, the department put the school resource officer on patrol. Now, patrol officers fill in at schools when they can, Foster said.

The department has also struggled to fill vacant positions, Foster said. He attributed that to low salaries and recent pay cuts.

"It's hard to recruit people to come on over," he said.