Officials say a state-funded study, a community initiative and an upgrade of the city's website could help the economy.

Officials say a state-funded study, a community initiative called Bloomfield Invents and an upgrade of the city's website could help the local economy

The projects include an economic development and market study, a community initiative known as Bloomfield Invents and an upgrade of the city's website.

Officials say diversification is important because a decline in the oil and gas industries has caused the city's gross receipts tax revenues to plunge, leading to a $1.3 million budget shortfall.

While a diverse economy could help provide Bloomfield with a cushion during the bust cycles of the energy industry, Mayor Scott Eckstein said in a phone interview Friday that oil and gas will always be an important part of the local economy.

"That's been the history of San Juan County for a long, long time," he said.

The state-funded economic development and market study kicked off in June, according to City Manager Eric Strahl. Eckstein said the goal of the study is to determine how the city can work to promote diversification of the economy.

Strahl said he could not remember the amount of money the city received for the study from the state when reached by phone Wednesday, but he estimated it was between $50,000 and $70,000. Strahl said the city will perform the study, and he does not know how long it will take before the results are released.

Crews smooth cement at the site of the Animas Business Park in Bloomfield in August 2015. Bloomfield officials say the park illustrates an attempt by the city to diversity its economy, although the development has not provided the range of businesses that officials anticipated. (Photo: Daily Times file photo)

One strength the city has is its location between Farmington and Albuquerque, Eckstein said. He said the city staff is also business friendly and willing to help entrepreneurs understand the city's rules and regulations prior to opening a business.

Improving the city's website to make it easier to navigate will also help people interested in starting a business learn about opportunities in Bloomfield, Strahl said.

Meanwhile, a group known as Bloomfield Invents began meeting on a monthly basis at the Bloomfield Multi-Cultural Center earlier this year. The group hopes to bring together Bloomfield residents with ideas and help them start small businesses. While it was organized by a Bloomfield resident, city officials and representatives from San Juan College's Enterprise Center have started attending the meetings.

The city became involved with the group through presenting information about the business incentives in Bloomfield. For example, Donica Sharpe, the city planning and zoning director, will attend the meeting from 2 to 5 p.m. Tuesday, Aug. 16, to discuss maker spaces, or places where people can go to create products and learn about crafts.

Those efforts are not the first attempts by Bloomfield officials to diversify the economy, Eckstein said, citing the Animas Industrial Park, a development located off of U.S. Highway 550 in north Bloomfield that provides space for new businesses to locate, as an example. Eckstein said if the park had worked out as the city had hoped, it would have been a great asset for the community. The industrial park, which broke ground in 2007, attracted its first tenant in 2015. While city officials were excited to see the first tenant move in and several other businesses have looked at locating in the park, Eckstein said it has not provided the range or number of businesses that had been anticipated. 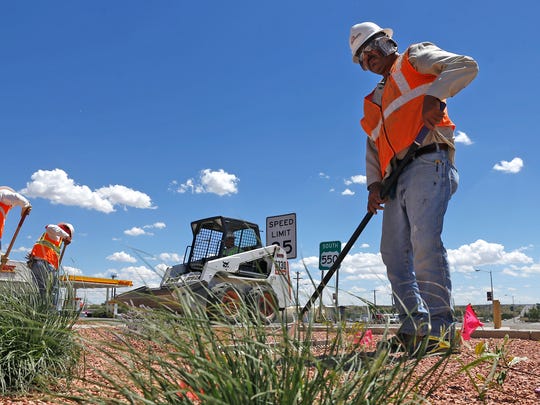 Another project that was billed as a way of making Bloomfield a more attractive place for businesses to locate was the U.S. Highway 64 beautification project. Since the economic downturn, the city has drawn criticism for the large landscaping projects it has initiated in the highway medians. The landscaping improvements cost about $1.7 million, and the majority of the funding came from a more than $1.2 million loan from the New Mexico Finance Authority.

Eckstein said the landscaping projects came after the New Mexico Department of Transportation widened the highway through Bloomfield and wanted to put in concrete medians. He said the concrete medians would have given the city a "freeway" feel.

Eckstein said one reason behind the landscaping was to slow drivers down and encourage people to stop in Bloomfield and spend money. While the city hoped to pay off some of the loan through business sponsorships of the median landscaping, it did not receive as many sponsors as it had hoped. Despite the lack of sponsorship, Eckstein said he is still optimistic about the project.