The Aztec City Commission's controversial decisions have sparked increased interest in city politics, which was evident during this year's election.

More than 20% of registered voters participated in the Aztec election, compared to 8% in Bloomfield and less than 7% in Kirtland.

AZTEC — Strong voter turnout allowed two Aztec candidates to glide to easy victories during the election on March 3, but other municipalities saw much lower numbers.

Roughly 8% of registered voters in Bloomfield and an estimated 6.9% of Kirtland voters cast ballots in the election, compared to more than 20% who voted in the Aztec election.

According to numbers provided by the Aztec City Clerk, 826 — approximately 20.8% — of the 3,968 registered voters participated. Voter registration in Aztec has increased by 185 people since the 2018 election.

Padilla won with approximately 74% of the votes while Randall received about 67% of the votes, according to unofficial results.

The strong turnout followed a weaker voter turnout in 2018 when only 332 people — then 8.8% of registered voters — cast ballots. 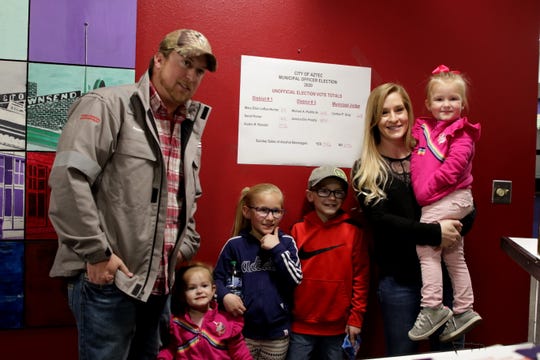 Since 2018, the City Commission has made several controversial decisions that sparked increased interest in city politics.

The most controversial of these decisions was when the City Commission voted down a Second Amendment sanctuary city resolution on a 3-2 vote. Randall was one of the two commissioners who voted in favor of the resolution and Padilla was in the audience that day. During the debate about the resolution, Padilla hinted that he would run for office once again after leaving the City Commission more than 20 years ago.

While campaigning, Padilla painted himself as a pro-gun candidate and highlighted his past economic development successes. He will take Sherri Sipe’s place on the City Commission. Sipe chose not to seek re-election this year.

More than 800 people cast ballots in the Aztec city election this year, compared to 423 people in 2016 when Randall was first elected to serve on the City Commission.

Municipal Judge Carlton Gray received 618 votes, according to unofficial results. He did not have an opponent.

The voters also approved a measure that will allow restaurants to serve alcohol on Sundays. The measure had overwhelming support, with approximately 66% of the voters approving it.

Meanwhile, Bloomfield’s turnout was less than half of what the city saw in 2018 when turnout surged largely due to several controversial lawsuits.

George Walter and David Aguirre won the two open city council seats this year. There were three candidates vying for two positions on the City Council. Each voter could vote for two of the three candidates.

Walter and Aguirre will take the seats currently held by Matt Pennington and Sam Mohler. Mohler had been appointed in 2019 to serve the remainder of Curtis Lynch's term when Lynch took a job with the city. Pennington chose not to seek reelection and Mohler did not seek election.

Kirtland has one fewer ballot cast than it did in 2018

Kirtland had one fewer voter this year than it did in 2018, although the estimated number of registered voters in town limits has increased in the past two years.