Aztec Electric Utility Director Ken George said the city will be buying power at lower rates than it has seen in 25 years. 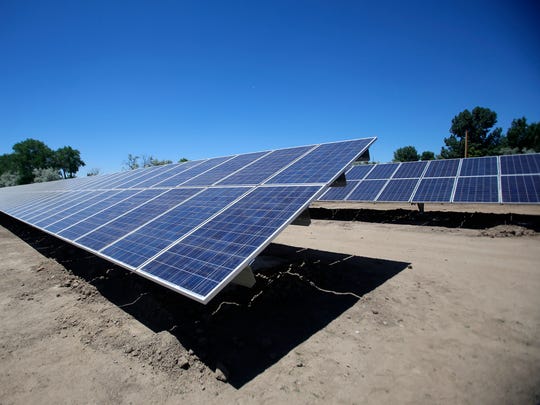 A solar array is pictured off of Western Drive in Aztec. The array was built by Guzman Energy as part of its agreement to provide power to the City of Aztec. (Photo: Jon Austria/The Daily Times)

AZTEC — The City of Aztec has signed an agreement with Guzman Energy extending its power purchase contract for another 10 years and slightly lowering the amount the city pays for power.

“We will be buying power with them for the next 10 years cheaper than we were 25 years ago,” Aztec Electric Utility Director Ken George told the City Commission during a work session on Feb. 11.

The new rate for the city is 4.25 cents per kilowatt hour, a decrease of approximately 0.2 cents.

George said it is the best power purchase agreement that the city has seen in years.

Following the work session, the City Commission unanimously approved the new contract as part of the consent agenda. The consent agenda includes multiple items that are voted on in a single motion.

Aztec Mayor Victor Snover said the city has had a good partnership with Guzman Energy since it started purchasing power from the company in 2015.

Back in 2015, Guzman Energy was a small company with five employees. Aztec was its first contract in New Mexico, followed a few months later by a contract with Kit Carson Electric Cooperative.

Now it has more than 40 employees and is continuing to add new utilities to its service list. Guzman has also been working with Bloomfield as the city considers forming its own electric utility.

The new, 10-year contract locks Aztec in to paying a little more than 4 cents per kilowatt hour for the next 10 years, which did cause Commissioner Sherri Sipe concern. Prior to contracting with Guzman Energy, the City of Aztec had a contract with Public Service Company of New Mexico. The city had entered the contract with PNM when natural gas prices were high and, when natural gas prices decreased, Aztec was locked in to higher rates for buying power.

George said he has been in the utility business for 40 years and the 4-cent power purchase rate is amazing.

“I don’t know how it’s going to get less than that,” he said.

Aztec started looking for ways it could produce some of its own electricity while it had the purchase power agreement with PNM. When Guzman Energy responded to a request for proposals for a new power purchase agreement in 2015, it proposed a one-megawatt solar array that Aztec would maintain and, eventually, own.

Heit said the power provider wanted a long-term contract with the City of Aztec to help it enter into long-term procurement contracts for electricity.