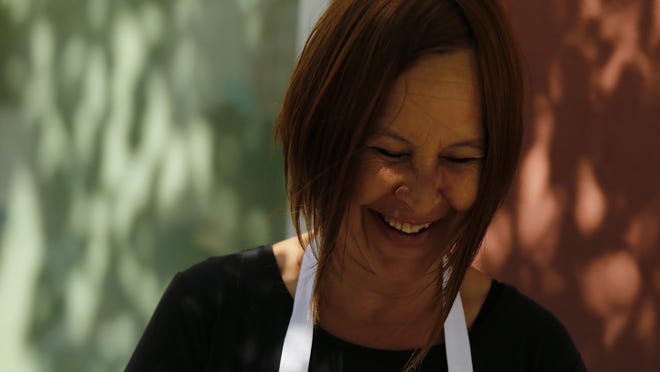 The mobile museum is a 38-foot RV operated by the New Mexico Department of Cultural Affairs that travels the state and stops at schools and libraries.

Inside the RV, a map displayed on a wall highlighted the 24 Native American communities that are culturally connected to New Mexico. Near the entrance, visitors can see dolls dressed in traditional clothing from the various groups. A pair of dolls in the bottom right hand corner are wearing purple. Mobile Museum education coordinator Scott Green said those dolls are dressed in traditional Navajo clothing.

The displays inside the mobile museum were provided by the Museum of Indian Arts and Culture in Santa Fe.

“Every year, a different state museum will install a new exhibit,” Green said.

Next year, the theme will be space, with the exhibit supplied by the Alamogordo Space Museum.

“Every year we change, and every year we go to schools all across the state,” Green said.

The Mobile Museum will make other local stops at Aztec Ruins National Monument from 10 a.m. to 2 p.m. Saturday and in Farmington at 10 a.m. Tuesday at the Farmington Public Library, 2101 Farmington Ave.

The museum's exhibits are interactive. During today's stop, children were offered the opportunity to hold pieces of turkey feather and rabbit blankets, beat drums and shake rattles, and feel a buffalo hide, as well as buckskin and rabbit fur.

“Each exhibit works for both children and adults,” Green said.

Jase and Adela Jewett, ages 4 and 2, said their favorite part of the tour was the drums. Kelsea Jewett took her three children, Jase, Adela and Duren, 1, to the library to pick up their stuffed animals from the library’s stuffed animal sleepover and chose to visit the Mobile Museum when they saw it parked outside.

“I liked the buffalo,” Jewett said. “I don’t think I’ve ever touched a buffalo hide.”