Facility intended to serve as creative magnet for young people

Jim Kuzma, a teacher at C.V. Koogler Middle School, rehearses with guitarist Zac Fleming and the Imagine Band on Feb. 6, 2017. The group is now based out of the new Aztec Theater Center for Music & the Arts.(Photo: Daily Times file photo)

FARMINGTON — Jim Kuzma has been teaching guitar at C.V. Koogler Middle School in Aztec for many years, and he prides himself on positioning his students for something bigger and better by the time they move along to high school.

The problem is, there wasn't anything bigger and better waiting for them at that point, he said.

"Aztec is all about sports — period," Kuzma said. "If a child in this school district is interested in music or theater, there's nothing for them."

Kuzma and a handful of like-minded associates hope to change that with the opening this weekend of the Aztec Theater Center for Music & the Arts. The facility is located at 104 N. Main Ave. at the site of the former Crash Music at the Aztec Theater. A grand opening celebration is planned from 5 to 9 p.m. Saturday.

The new business is intended to serve as a multipurpose facility that offers music lessons, art exhibitions, live performances, and meeting and special events rental space. An entity called Imagine LLC runs the center, and it includes Kuzma and Koogler Middle School business manager Tammy Kauvaka as members of its management team.

Visitors to the center who became familiar with the space when it presented concerts by nationally touring acts under the auspices of Crash Music are likely to note some changes in its appearance. Kuzma and Kauvaka said a number of renovations have taken place, most notably the repainting of the interior walls. Kuzma said the walls of the entryway also have been retextured and repainted using Santa Fe-style colors and touches. Kuzma said a new LED stage lighting system is in place, as well. 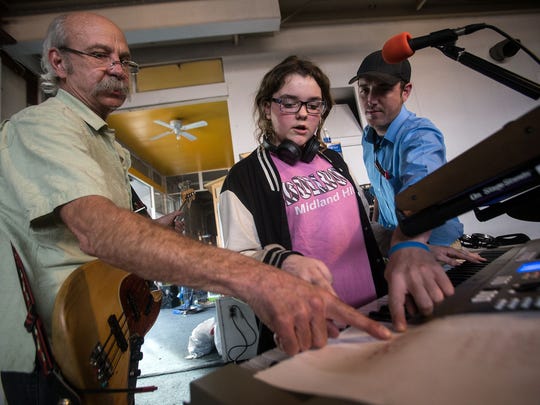 Other changes are in the works. Kauvaka said the management team next hopes to refurbish the Aztec Theater's neon sign and marquee outside the building.

"As we get money, we have a lot of ideas, like a dance floor," Kauvaka said. "We'd also like to get rid of the (support) poles hindering the vision of the stage. But that's a major project in the far future."

Capacity for the center is between 250 and 300 people, and Kauvaka and Kuzma envision it being used for all manner of events, including birthday parties, town hall meetings, candidate forums, concerts and class reunions. But mostly, they say, it's a place where young people whose interests extend to performing and visual arts will have a place to pursue their dreams.

"We wanted to make a place for the community to have for music," Kauvaka said. "A lot of the kids in school don't fit into sports, and we want them to fit in elsewhere."

One vehicle for doing that is the Imagine Band, a group that Kuzma and Kauvaka organized at Koogler last year. The band has since taken on a life of its own, becoming a professional operation and consisting of both students and adults, including Kuzma and Kauvaka. The group regularly performs at events around the county, and Kuzma said it will soon record its first CD in a studio.

The Imagine Band has made the center its base of operations and will perform at Saturday's grand opening, along with 4D3, a Durango, Colorado-based Americana trio. The event also will feature refreshments and information about the center's music lessons and rental facilities.

Imagine LLC is leasing the building, but Kuzma said the management team has undertaken negotiations with the owner and hopes to have an agreement in place soon to purchase it. He envisions the center becoming a long-term anchor for efforts to provide local young people with a creative outlet.

"It would sure be nice if we could offer music and arts to more kids," he said.