Community members are illuminated by a bonfire during a healing event on Sunday, Dec. 17, 2017 in Aztec, New Mexico. Jon Austria/The Daily Times

Community members are illuminated by a bonfire during a healing event on Sunday, Dec. 17, 2017 in Aztec, New Mexico. Jon Austria/The Daily Times

Community members are illuminated by a bonfire during a community healing event on Sunday, Dec. 17, 2017 in Aztec, New Mexico. Jon Austria/The Daily Times

Community members are illuminated by a bonfire during a community healing event on Sunday, Dec. 17, 2017 in Aztec, New Mexico. Jon Austria/The Daily Times

FARMINGTON — Family members and friends described Casey Jordan Marquez as a happy person who believed in helping others.

Marquez was one of two Aztec High School students killed during a shooting at the high school on Dec. 7.

Marquez's cheer teammates from Aztec High School, as well cheerleaders from Piedra Vista, Farmington, Durango, Bloomfield, Shiprock and Kirtland Central high schools, attended her funeral service today at San Juan College. Some of the cheerleaders from other schools wore orange bows in their hair. The cheerleaders hugged each other and wiped tears from their eyes during the service.

MORE: Bonfire will focus on healing after Aztec H.S. shooting

Gov. Susana Martinez also attended and spoke during the service. She encouraged people to continue to remember and support the families of the shooting victims.

"Don't forget them in the weeks and months and years to come," Martinez said.

The service ended with a time for people to share their memories of the 17-year-old Aztec High School student. During that time, Aztec cheerleaders presented her mother, Jamie Lattin, with a shadow box that included a hair bow.

The family released a statement this morning thanking the community for its support and asking for respect.

“We would like to extend our sincere thanks to our community and state for their care, compassion and support for our daughter, Casey," the family said in the statement. "Because of the outpouring of love our family has received, we have quickly learned that her angel wings spread further than any of us realized. The breadth of her impact extends beyond our wonderful community. She also touched the lives of others throughout our state and country. Please know that every gesture and kind word is greatly appreciated and is helping us as we begin our healing. At this time, we kindly request that you respect our time to mourn, heal and connect with our community, friends and family.”

James Foster, a family friend, said Marquez and Francisco "Paco" Fernandez, who was also killed during the shooting, were in the wrong place at the wrong time, but God used them as angels to save lives.

During the service, one of Marquez's teachers read a poem she had written. The poem started with a time of 11:59 p.m.

"But one minute, today's gone and tomorrow's here," Marquez wrote.

In the poem, Marquez wrote about how "all the things you've done today, the lists you've made, the places you've been" will soon become a memory lost among the yesterdays.

Hundreds of people gathered later today on private property off of North Main Avenue in Aztec for a bonfire that was designed to bring healing to the community.

Marquez's family requested the bonfire and her mother, Jamie Lattin, lit the fire with the help of several firefighters.

Before Lattin lit the fire, people from the community wrote notes and tossed them into the pit filled with wood and pallets.

Marquez's sister, Capri Marquez, thanked the community at the bonfire.

"I know that she is looking down, and she is smiling," Capri Marquez said.

Several children took turns going to the microphone and saying their names and adding either "I love Aztec Strong" or "I am Aztec Strong."

Family friends Brice Current and John Faverino met with the media prior to the funeral service.

"She was very active in the community," Faverino said. "She thought about everyone."

He said when his mother, who is in a wheelchair, struggled to control her large dog, Marquez bought her a harness so she could walk the dog.

Current said on Friday morning Marquez's mother had met with the Aztec cheer team for the first time since the shooting. He said Lattin encouraged the cheerleaders to reach out to other people and help them. He said Marquez had shown his daughter around the school on her first day there. 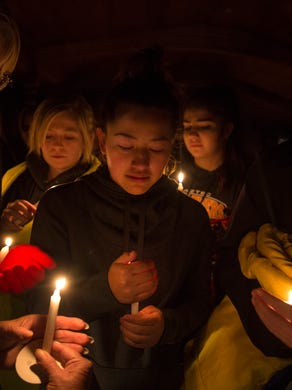 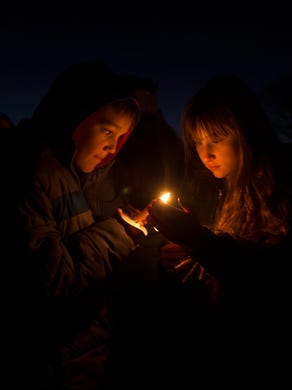 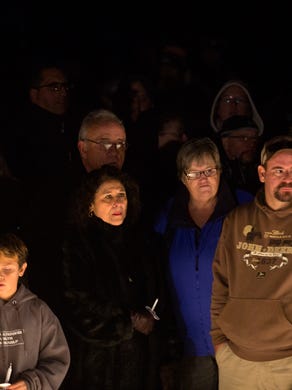 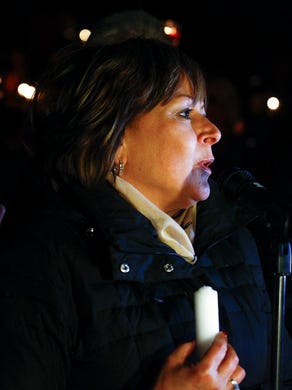 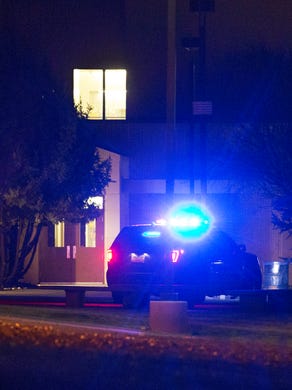