The Aztec City Commission approved a contract with Consensus Planning for a study of the economic conditions in the historic downtown.

Existing businesses will be inventoried and market trends evaluated

AZTEC — The city of Aztec is hoping to find ways to revitalize its historic downtown.

The Aztec City Commission approved a contract Tuesday with Consensus Planning, an Albuquerque-based company, to perform a study of economic conditions in the district.

"I'm excited to see this moving finally because it's been one of my big questions — what's in our toolbox for the Metropolitan Redevelopment Area for our downtown, and we've just not been able to get it to that point," Mayor Sally Burbridge said during the Tuesday City Commission meeting.

The meeting can be viewed online on the city's YouTube page.

Aztec hopes to create a vibrant downtown that becomes a destination rather than a place people drive through to get from Albuquerque to Durango, Colo.

This study is being funded using a $50,000 grant from the New Mexico Finance Authority. The city will only pay $4,000 for the study. Community development director Steven Saavedra said the study will help the city access state and federal grants to revitalize downtown.

Vacant buildings are not uncommon in downtown Aztec. One building has cardboard pasted on the interior of its windows. Others have for sale signs or closed signs out front.

John Paschall, owner of Main Street Music, said he has watched businesses come and go during the 13 years his store has been open.

"They do everything right," he said. "Sometimes it just doesn't work." 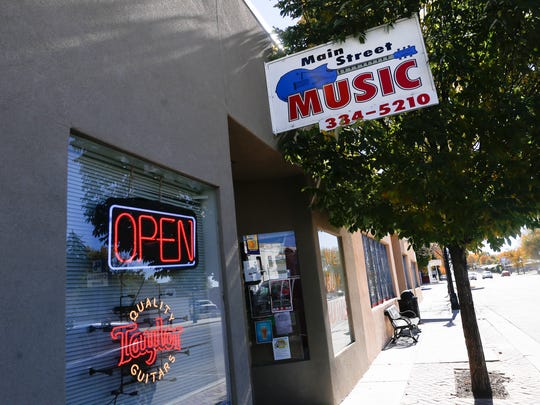 The current vacancy rate, as well as the turnover rate of businesses in the district, will be among the factors Consensus Planning evaluates during the study.

According to the work plan for the study, Consensus Planning will evaluate the existing conditions and take an asset inventory downtown. It also will complete a market analysis, which will include looking at the types of businesses in the area. As part of its market analysis, Consensus Planning will identify areas in the district that could be used for residential housing.

Consensus Planning is also tasked with creating a vision for the downtown area that reflects Aztec's history and a master plan. It will present the city with a plan of how to implement strategies for revitalization and how to find funding sources. Throughout the process, there will be community meetings, including a two-day public workshop. Those meetings have not been scheduled.

Saavedra said the study will be completed within six months.

While several businesses have closed downtown, other businesses, such as Main Street Music, have been operating out of the downtown for more than a decade.

Paschall's advice for making a business in downtown Aztec successful is "make your shop a destination." He said some of his customers come from Durango and the Navajo Nation to purchase musical instruments.