Even continues throughout weekend at Riverside Park 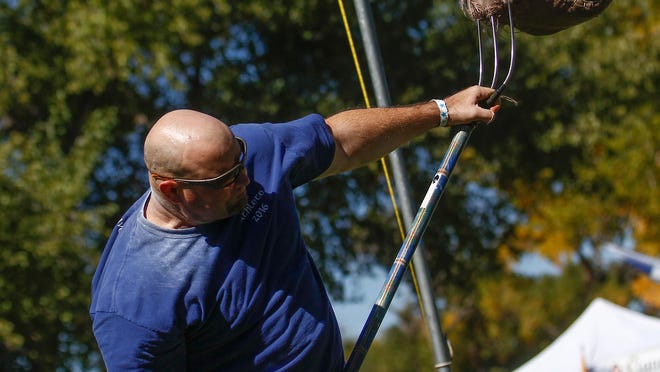 The festival, which continues Sunday, includes Scottish athletic competitions such as sheaf toss. During the sheaf toss, contestants use a pitchfork to toss a bag filled with hay over a bar. The festival also includes vendors and highland dances.

Cory Black, a Sandy, Utah, resident, returned to Aztec for the fourth consecutive year to compete in the Highland games.

He said the field at Riverside Park is one of the best fields for the Highland games because it is well maintained and shady.

Black is not the only athlete who favors Riverside's shady field.

"It's a beautiful field," said Albuquerque resident Casey Head, who attended the Aztec games for the first time today.

Head said the trees provide shade to protect the athletes from the sun.

Head and his father attended the games to compete together.

Thompson has competed in Aztec for at least four years and said he enjoys the atmosphere.

"It's not massive, but you have a good turnout," he said.

While the majority of Riverside Park is set aside for throwing, the festival also features dance competitions.

Bri Hubbard, 14, attended the games to dance with her dance academy, Highland Dance Albuquerque. Hubbared was originally a ballet and tap dancer, as well as a gymnast. She said her fourth-grade teacher got her interested in Highland dance while teaching about world geography and cultures.

Because of their military roots, the Highland dances feature a lot of jumping, Hubbard said.

Hubbard has been dancing for about five years. About four years ago, she competed in her first Highland dance competition at the Aztec Highland Games. She said Riverside Park in Aztec has a lot of good memories for her, and the annual festival gives her the chance to hang out with her friends.

"It's such a cute little park," Hubbard said.

For more information about the Aztec Highland Games and for a schedule of events, go to aztechighlandgames.com.