Local resident wants to give name to peculiar landmark

Local resident wants to give name to peculiar landmark

Formation is located west of US 550 and Animas River

A local resident has asked that this distinctive formation near Cedar Hill be designated Molar Rock by the federal government because of its resemblance to a tooth.(Photo: Courtesy of Gary Skiba)

FARMINGTON — A peculiar rock formation located west of Cedar Hill in northern San Juan County soon could receive the official name Molar Rock if a local resident has his way.

Gary Skiba, who lives approximately 7 miles north of Aztec near the site in question, submitted an online request to the U.S. Board on Geographic Names several months ago to have the formation named Molar Rock, given its resemblance to a tooth.

The Geographic Names Committee of the New Mexico Geographic Information Council, which bears responsibility for geographic names in the state, is taking public input on Skiba's request and will make a recommendation to the federal government later this summer. The federal government is charged with contacting Native American tribes in the area and soliciting their input.

"It's a fairly obvious piece of topography, and I thought it deserved (an official designation)," Skiba said.

An avid outdoorsman, Skiba described himself as a hiker, kayaker and bicyclist, though he is not a climber. He said he has visited the rock formation several times and came up with the name himself. 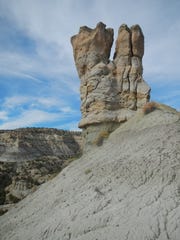 The Geographic Names Committee will forward the public input it receives, along with its recommendation, to the U.S. Board on Geographic Names in approximately 60 days, Stauber said. He said the federal agency meets quarterly and will make a decision on the proposal after its members have had a chance to convene and discuss the subject.

Though he has been on the committee only a short time, Stauber said requests like Skiba's are rare in New Mexico, although his group is dealing with a second such request currently — the proposed renaming of a mesa in Sandoval County.

Stauber said if the formation officially is designated Molar Rock by the feds, that doesn't mean local residents who might not care for the name are obligated to use it.

"It's mostly for (federal) contractors and agencies," he said. "It becomes part of a data base the feds have so they can use the same name for everything."

Anyone wishing to express an opinion on Skiba's proposal can contact Stauber at Zachary.stauber@state.nm.us or 505-383-2055.

Mike Easterling covers education, health and the environment for The Daily Times. He can be reached at 505-564-4610.