Diana Mesch attended the City Commission meeting on Tuesday to voice her concerns and encourage city officials to find ways to pay for the utility costs without raising rates.

"This is one speech I wish I didn't have to give," she said when she addressed the commission on Tuesday. "But I couldn't face myself in the morning if I didn't."

The city posts videos of the commission meetings on its YouTube channel.

Mesch learned about a recently completed study that proposes the city raise wastewater utility rates by 60 percent this year and 35 percent next year while also increasing water and electric rates over the next five years.

The city contracted with Raftelis Financial Consultants Inc. to perform a rate study and cost-of-service study that looked at the debt that the city currently has to pay, as well as the necessary upcoming projects and future debt on the three utilities.

The 60 percent increase was proposed to help pay debt on the wastewater utility. This debt was incurred through two projects — a wastewater treatment plant and a sewer outfall line.

Mesch said the residents of Aztec cannot afford the large increase that the study proposes and urged commissioners to look for other ways to pay for the utilities that do not involve "crucifying the public." 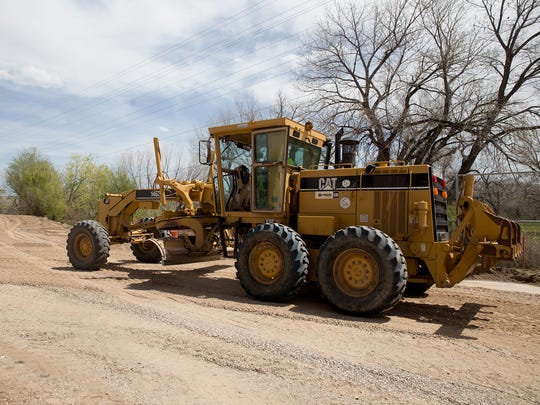 Mesch was a commissioner in 2006 when the city chose to raise rates by $2.50 a month to pay for a new wastewater treatment plant and address a shortfall in the utility's budget. On Tuesday, she asked about the 2006 utility rate increase, as well as a study that was conducted to determine how the new treatment facility would affect sewer rates in the city. When reached by phone Wednesday, City Manager Joshua Ray said the city has not missed a payment on the new sewer plant, and the 2006 rate increase is still being used to pay off the loans for it.

While there was a study conducted to see how the plant would impact rates, it was not a full cost-of-service study, Ray said.

"The city hasn't done a cost-of-service study in, maybe, ever," he said.

Raftelis' study was a cost-of-service study evaluating future needs and expenses on the three utilities.

“We want to find the best manner in which to pay for our utilities over time.”

The joint utility fund has been a healthy fund in the past, and money from the electric fund has been transferred to the city golf course to fund its operations. That transfer was the only finding in the city's audit, which was presented to the City Commission on Tuesday, as auditors found that the transfer was not properly done. Rather than transferring the money to the general fund and then to the golf course, the transfer went directly from the electric utility fund to the golf course. Ray said the transfer may have impacted the funds in the joint utility fund, but he said it was not a significant impact and did not contribute to the need to raise rates on any of the three utilities.

Ray said the city has known for years that wastewater utility rates would need to be increased because of the need to install a sewer outfall line.

The city staff is evaluating the proposed increases, and the City Commission has not made a decision about new rates. Ray expects the commission to rule on the rates early next month.

"We want to find the best manner in which to pay for our utilities over time," he said.

Ray acknowledged that 60 percent is an extreme increase for customers.