City Commissioner McClure has started a fundraiser to purchase new furniture and a TV for Aztec Fire Department.

FARMINGTON — Right now, the inside of the Aztec Fire Department's Station No. 1 includes an ancient TV with dials and old furniture.

But one City Commissioner hopes to change that. Katee McClure has started a GoFundMe account to raise money to buy new furniture and a 60-inch television for the station, located in the city's Municipal Complex.

As of today, more than $300 had been raised toward the $8,000 goal. McClure said people can also donate to the "Aztec Volunteer Fire Department Fund" at Citizens Bank.

McClure started regularly visiting the fire department — the commissioner said she wanted to learn more about what the volunteer firefighters do — last summer and was surprised by the condition of the furniture and the TVs.

"I ended up sitting on this couch that almost swallowed me," McClure said about her visit to the fire department.

McClure said the department has one couch in decent condition and two others that "aren't even worth giving to Goodwill." 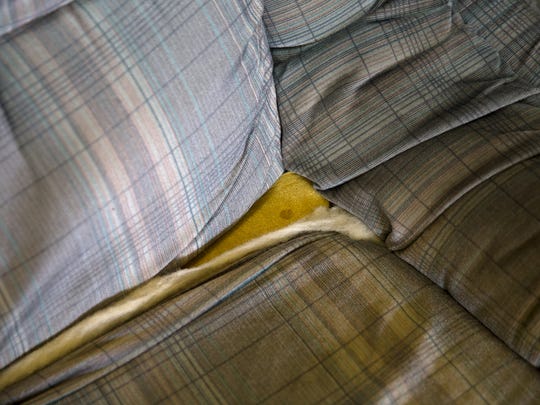 A worn couch is pictured on Thursday inside the training room of Aztec Fire Department's Station No. 1. (Photo: Jon Austria/The Daily Times)

"Some of it's not very old, obviously," Chief Kevin Simpson said as he pointed to the furniture today. "But some of it was here when I joined, which was 39 years ago."

He said the department's frugality led them to skip replacing items like furniture and instead to spend money on a new $500,000 firetruck the department purchased in October. Simpson said he has focused on spending money on items that can help the firefighters fight fires.

Simpson provided McClure the fire department's wishlist. At the top was a 60-inch smart TV, which has built-in Internet connectivity.

"A lot of the training now is done on laptops or computer-based," Simpson said. "If we could plug into a smart TV, it would simplify that."

McClure said she has received a lot of positive comments from the community about the fire department, adding that residents have stories with her about receiving assistance from volunteer firefighters.

"To me, they're like the unsung heroes, and you don't really think about it until you call 9-1-1," she said.

A training mannequin sits on the a couch on Thursday at the Aztec Fire Department's Station No. 1. (Photo: Jon Austria/The Daily Times)