The Aztec City Commission will consider agreements for the arterial route and a school district solar farm. 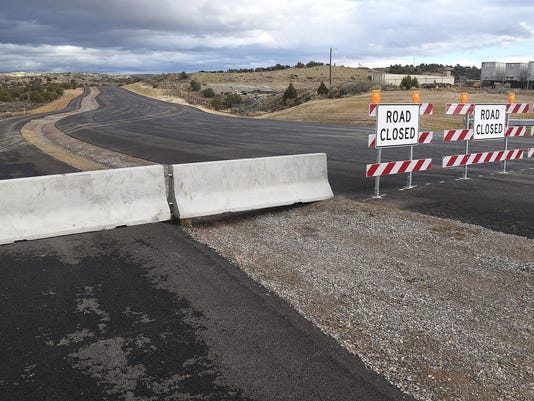 The southern phase of the East Aztec Arterial Route is pictured Friday off U.S. Highway 550 just south of Aztec. The Aztec City Commission will consider an item related to the project on Tuesday.(Photo: Steve Lewis/The Daily Times)Buy Photo

FARMINGTON — During its last meeting of the year this week, the Aztec City Commission will consider agreements related to the East Aztec Arterial Route, an Aztec Municipal School District solar farm and operations at the municipal golf course.

On the consent agenda, the commission may approve geotechnical testing for retaining walls for a portion of the East Aztec Arterial Route. City Manager Joshua Ray said the testing is a requirement from the New Mexico Department of Transportation before it approves the plans for phase two of the project. Phase two will connect the two ends of the arterial route. The route will serve as a bypass around downtown Aztec.

The geotechnical testing will cost about $68,400. The testing began on Dec. 12 because of a timeline required for the arterial route's funding. The city must have NMDOT approval for phase 2 by June or it could lose several funding sources. If it is unable to meet that deadline, the funds may not be available again until 2019, according to the agenda packet.

The consent agenda is voted on in one motion.

The city also has three items of business that commissioners will discuss. Two of those three items are related to the municipal golf course.

The two items are options for the future of the course. The first option consists of contracting with Randy Hodge, the owner of Ruby's In the Valley restaurant and who currently manages the clubhouse at the course, for operation of the entire course. The second option would be to abandon the golf course. That would mean the course that has been open since the 1950s would likely close.

The city also will consider a customer generation agreement with the Aztec Municipal School District about the solar generation system the district will construct on a parcel of land next to McCoy Elementary School.

The 149-kilowatt solar farm would save the school district about $20,000 a year in electricity costs, according to the agenda packet.

Ray said the city is concerned about lost revenue but understands the school district's desire to save money.

District Superintendent Kirk Carpenter said the 149-kilowatt farm is the beginning of a larger, 750-kilowatt project the district hopes to construct. He said the district will work with the city for approval of the larger array.

"We have long-range plans of doing more solar in the district," he said.

The district already has a rooftop solar array at its administrative offices. The array was installed over the summer, and Gary Martinez, the director of finance, said he estimates it will save the district $25,000 this year.

Martinez said the district also has looked at the potential of wind generation or micro gas turbines. He said the wind speed in Aztec is marginal for supporting such a project, but gas turbines may be a promising option for electricity generation.