A Veterans Day parade in downtown Aztec recognized and honored the men and women who served in the armed services.

AZTEC — Several groups came together to be part of a Veterans Day parade in downtown Aztec this morning.

It was one of several events held on Friday and today in San Juan County to honor veterans and active members of the U.S. military.

There were 18 entries for the Aztec parade, according to organizer Butch Condrey. Participants marched along South Main Avenue from East Zia Street toward the Safeway grocery store near intersection of North Main Avenue and U.S. Highway 550.

Local chapters of veterans’ organizations, including the Veterans for Foreign Wars, American Legion, Blue Star Mothers of America and the Disabled American Veterans had entries in the parades.

Before the event started, some participants discussed why it was important for them to pay tribute to veterans.

Pedro Larribas, the senior Army instructor for the Kirtland Central High School JROTC program, brought 37 members of the group to the parade. The students started the day by eating breakfast with veterans at the VFW Post 614 before lining up for the parade. Some of the students were dressed in historic military uniforms from conflicts including the War of 1812, the Spanish-American War, World War I, World War II and the Iraq War. 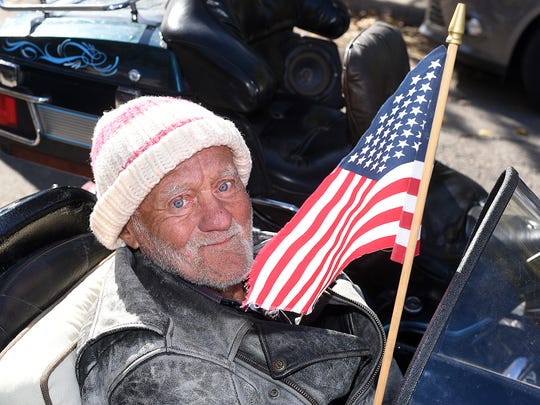 Isaiah Mendeta, a 2nd lieutenant in the Aztec High School JROTC program, said it was important for him to recognize veterans in his family, including his father and grandfather.

The students carried a large American flag that was about three lanes wide in the parade. Members of the Aztec High School cheerleading team were part of the parade.

“I’m just showing all the respect I can to those that served this county,” Mendeta said. “I think joining (the JROTC) program and wearing a uniform on a day like this just makes the event fantastic.” 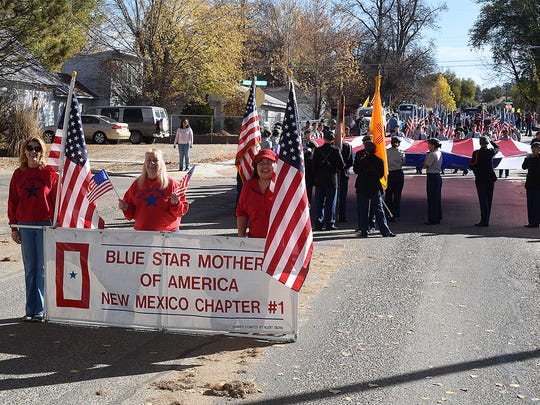 Members of the local chapter of the Blue Star Mothers of America line up for the Veterans Day parade Saturday in Aztec. (Photo: Steve Lewis/The Daily Times)

Harold Pepin was eager to drive his 1947 white vintage firetruck. He served three years in the Army during the Vietnam War and is a member of the San Juan Mountain Chapter of the American Historical Truckers Society.

Joshua Kellogg covers education for The Daily Times. He can be reached at 505-564-4627 and jkellogg@daily-times.com.