Music and archaeology come together at Aztec Ruins

An indigenous musical instrument presentation was one of the events Aztec Ruins will have to celebrate the centennial.

Music and archaeology come together at Aztec Ruins

AZTEC — As a child, Marlon Magdalena saw a variety of instruments used in traditional ceremonies at Jemez Pueblo, but it wasn't until he started working at the Jemez Historic Site that he began to delve into the meaning behind the music.

Magdalena shared some of his knowledge of the musical instruments during a presentation Friday afternoon inside the Great Kiva at Aztec Ruins National Monument.

His presentation was part of a series summer events that the monument is hosting this year. Park Ranger Cyresa Bloom said the monument added special events this summer to celebrate the centennial of the National Park Service.

The special events provide more immersive experiences into the heritage of the monument. Another event scheduled for July 8 will feature a Navajo weaver who will deliver a presentation on spinning, weaving and dyes.

Magdalena started playing the flute in 2008. A year later, he began making his own indigenous-style flutes. When audience members asked him to play a song, he picked up a flute with a mallard-head design on the bottom that he had built, and he performed two songs.

He started his presentation by demonstrating drums.

"Most dances involve a drum or multiple drums," he told the audience, adding that the drummer represents the heartbeat of the song. 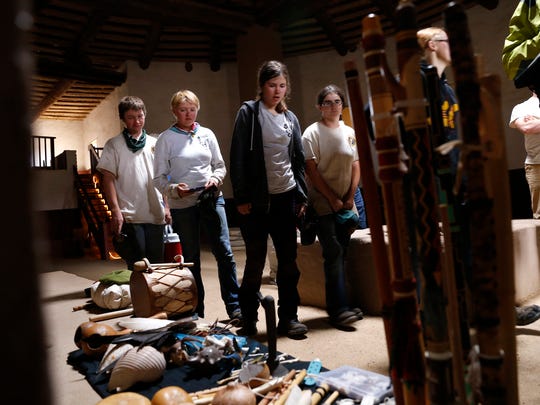 In addition to drums, Magdalena showed off gourds, bells, horns and flutes.

Some of those instruments, such as conch shell horns, were the product of trade. Magdalena suggested that even the flute may have originated elsewhere and been brought to the Southwest.

There are a variety of dances and ceremonies in Puebloan culture, Magdalena told the audience. Some of the songs and dances are based on rain, war or hunting. Some Pueblos use flute music in the spring time to encourage plant growth, he said.

"For us in Jemez, around harvest time is when we use this to ripen our plants," he said.

In addition to crafting flutes based on current Puebloan traditions, Magdalena looks through archaeological records to build replicas of instruments that were played about 1,000 years ago.

One of those replicas he shared at Aztec Ruins National Monument was based on a flute found in Pueblo Bonito in Chaco Culture National Historical Park. The flute was in pieces when it was found, but Magdalena was able to piece together a replica based on its pattern and written descriptions of the artifact.

Bloom said the instrument that stood out to her was the horn made out of a gourd. She said the monument staff grows gourds in its garden.

"It's something easy that the kids can handle," she said, adding that other horns can be big and heavy for children.