FARMINGTON — As a young girl living with her grandmother, Jaqui Jacobs said money was scarce in their household... 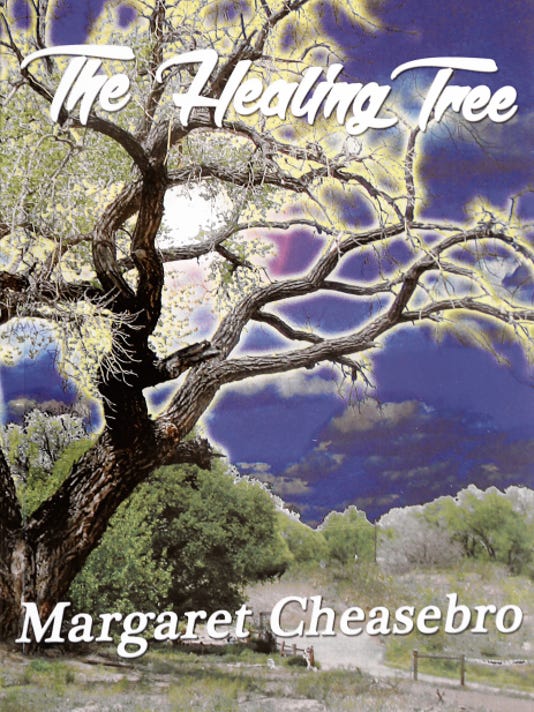 Author Margaret Cheasebro will sign copies of her new book 'The Healing Tree' this weekend at the Feat of Clay Co-op Gallery.(Photo: Courtesy IMAGE)

FARMINGTON — As a young girl living with her grandmother, Jaqui Jacobs said money was scarce in their household — so scarce, in fact, that when the circus came to town, they couldn't afford the price of admission.

But the industrious young Jacobs quickly figured out a way around that. She got busy with the potholder kit she had gotten for Christmas, creating several of the items, and went door to door in her neighborhood hawking her work until she had earned enough money to take her grandmother and herself to the show.

"The bug bit — and it stayed that way," said Jacobs, who will display her work in an exhibition opening this weekend at the Feat of Clay Co-Op Gallery in Aztec.

Even though that potholder episode was Jacobs' introduction to the commercial side of creativity, it was far from being her first artistic experience. She said she's considered herself an artist ever since she literally had traded her crayons for watercolors a few years earlier. Now, she works in various media — watercolor, leather, ceramics, book making and beading among them.

She modestly likens her all-over-the-map artistic inclinations to the main character in her favorite childhood radio program, "Sparky's Music Mix-up." The show focused on the adventures of a child who began taking accordion lessons before getting bored and moving on to the piano and various other instruments, playing all of them poorly.

But Jacobs has been focused in recent years on paper works, particularly crafting a wide variety of hand-made journals. Some are small and will easily fit in a purse or pocket, while others are much larger and can be hung on a wall as a decorative item. Some are designed for writing, while others are made to save leaves, flowers or memorabilia.

"I like to go off the grid," she said. "Of course, I make some for gifts, but for some, I like to go really out of the box."

Jacobs also makes jewelry, though she said it is anything but fine jewelry.

"I love working with beads and color," she said.

Jacobs plans on showing 30 to 35 jewelry pieces in the Feat of Clay show and approximately 50 journals.

Also featuring her work in this show is Jacob's roommate for the last six months, Meg McDonald, a printmaker, watercolorist and Chicago transplant. The two not only share an interest in art, they encourage each other creatively, McDonald said. Naturally, that means they keep their quarters cluttered with art materials.

"The kitchen table has never seen the light of day," Jacobs said, laughing.

McDonald left behind her big-city existence many years ago and moved to Laramie, Wyo., where she reveled in the camping trips to the mountains she took with her husband. Those nights spent beside a campfire under a canopy of stars left a big impression on her, she said.

"My work is kind of about feelings, about things," she said, citing the memory of those camping trips and how it manifested itself in one of her paintings for this show.

"I do a lot of watercolor, but I also do etchings — that's kind of my passion," she said. "I've been doing that since college."

McDonald said she always wanted to be a studio artist but worked as a nurse so that she could afford to indulge her artistic impulses.

McDonald acknowledged it's hard for her to describe the nature of her work to others, since much of it deals with the spirit and how people relate to one another. When she was installing her work at Feat of Clay last week — she'll be featuring approximately 20 pieces — she recalled feeling a little apprehensive about the show.

"My stuff seems kind of weird for Aztec," she said she told a gallery attendant. But McDonald's fears quickly were allayed, she said. "Oh, we like weird," the woman told her.

Both artists are grateful for the opportunity to show their work at Feat of Clay.

"These kinds of venues throughout the area are so vital," Jacobs said. "I hope the community can come out and enjoy it."

The Friday, Sept. 25 opening reception for the show also will feature local author Margaret Cheasebro, who will be on hand to sign copies of her new book, "The Healing Tree." The 294-page fantasy adventure novel is designed for young adults and takes place at a summer camp, featuring three children who quickly discover they are connected in ways they never knew.

The show remains on display through Oct. 17.

What: Art show by Jaqui Jacobs and Meg McDonald, and book signing by Margaret Cheasebro for “The Healing Tree”
When: 5 p.m. Friday, Sept. 25 Where: Feat of Clay Co-op Gallery, 107 A. Main Ave. in Aztec
For more information: Call 505-334-4335
CONNECTTWEETLINKEDINCOMMENTEMAILMORE
Read or Share this story: https://www.daily-times.com/story/news/local/aztec/2015/09/23/aztec-gallery-opens-new-show-friday/72735942/
Share your feedback to help improve our site experience!