Local fire officials are hoping the approach of monsoon season lessens the danger of large fires in San Juan County.

Dry vegetation, use of fireworks top list of concerns

FARMINGTON — As the outbreak of two wildland blazes this week just north of San Juan County has illustrated, fire season in the Southwest is in full swing. Local fire officials are hoping residents are taking note of the danger.

Capt. David Vega, San Juan County's deputy fire chief of operations, said the demands faced by his agency have grown heavier recently, even before the official start of summer on June 20 or the onset of fireworks season surrounding the July 4 holiday.

"In the past few weeks, we've definitely seen an uptick in wildland-related calls," he said.

A disappointing winter and a warmer-than-normal spring have created hazardous conditions in the region, contributing to the start of two wildfires over the past few days in southwest Colorado — the East Canyon Fire near Mancos and the Six Shooter Fire in the Bondad area.

Robert Sterrett, deputy chief of the Farmington Fire Department, said the area's fire danger is likely to remain high until it receives a substantial amount of precipitation over a sustained period. The occasional rainfall isn't likely to have much of an impact, he said.

"We got some moisture a week or two ago, and its impact was marginal," Sterrett said.

Conditions have become noticeably worse in the past couple of weeks, and that has made the job of Sterrett's department more difficult.

"Absolutely," he said. "It's not taking hardly anything to start these fires."

Sterrett noted the number of lightning-caused fires that have gotten started over the past several days in the Pagosa Ranger District in Colorado. The fact that so many blazes are being reported there doesn't bode well for hotter, drier locations like San Juan County, he said. 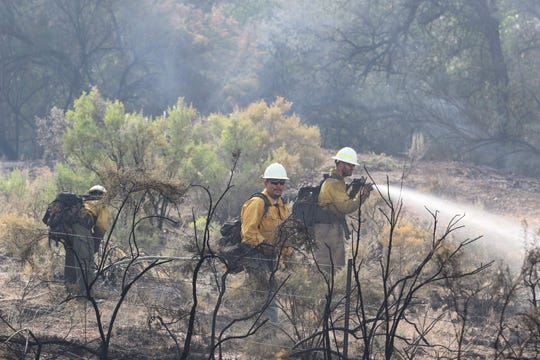 After several months of dry weather, conditions are ripe in San Juan County for wildland blazes like the Arroyo Fire that burned on July 1, 2019, near County Road 4800. (Photo: Daily Times file photo)

"It just goes to prove even the higher elevations than us are set to hold fires," he said. "We're in the same boat they are."

The effort required to fight the two Colorado wildfires already is stretching various agencies in the region thin, Vega said, meaning if a large fire gets started in San Juan County, there will be fewer resources that can be devoted to it.

"There's going to be that competition for resources," he said. "We just want to do everything we can to prevent that from happening."

Sterrett said conditions are worse than they were last summer but better than they were in 2019, when the 416 Fire north of Durango which began on June 1, 2018 and was contained on July 31, 2018.

"We're between a normal year and an extreme year," he said.

The potential for a small fire to spread rapidly and become an out-of-control blaze is very high right now, Vega said, adding that the State of New Mexico already has put numerous fire restrictions in place on state and private lands, including prohibitions on most forms of open burning and limits on where fireworks can be used. 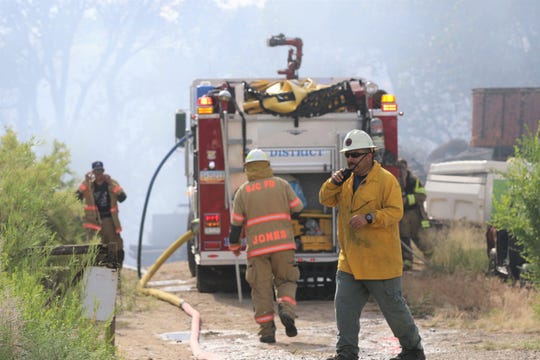 With monsoon season more than two weeks away and the Fourth of July holiday looming, local fire officials are worried about the potential for a large wildland blaze to break out in San Juan County. (Photo: Daily Times file photo)

"If you're going to use fireworks, do it in an area where you're not going to set your house on fire or your neighbor's house on fire," Vega said.

As it has for the past several years, San Juan County is making the northeast corner of the parking lot at McGee Park, 41 County Road 5568 between Farmington and Bloomfield, available to fireworks users. The lot will be open from June 20 through July 6.

From July 2 through July 4, Vega said fire officials will be on patrol throughout the county to enforce state fire restrictions and help prevent any accidental fires from getting started.

Vega said conditions this year are noticeably drier than they were last year, when San Juan County received abundant snowfall, substantially reducing the wildfire risk. Most of the county is classified as being in severe or extreme drought according to the U.S. Drought Monitor, and Vega said the short-term forecast doesn't offer any reason for optimism.

"In terms of outlook, there is no measurable precipitation expected for the next 10 to 14 days," he said.

But over the long term, Vega is more hopeful.

FacebookTwitterGoogle+LinkedIn
Photos: Images from the 416 fire, June 1 to July 31 2018
Fullscreen

Increased fire activity shut down Highway 550 on Friday, June 1, 2018. Purgatory Resort that day also announced it was halting activities until further notice due to the 416 Fire burning 10 miles north of Durango, Colorado. This was among the firat images released of what would become a raging blaze. Colorado Department of Transportation
Fullscreen
Traffic controls were quickly put in place when Highway 550 is opened temporarily for traffic. This undated photo is part of a gallery posted on Facebook by the #416 Fire Team, It can be viewed at http://bit.ly/2JpxhQG. 416 Fire team
Fullscreen
A Colorado Department of Transportation maintenance crew moves barriers from the upper County Road 250 area to the location of where the train tracks cross U.S. Highway 550 in Hermosa, Colo. Colorado Department of Transportation
Fullscreen 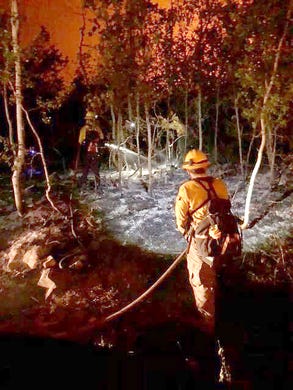 This undated photo of firefighters battling the 416 Fire near Durango, Colorado, is part of a gallery posted by the #416 Fire team at http://bit.ly/2JpxhQG. 416 Fire team
Fullscreen
Firefighters from the Los Pinos Fire Protection District of Ignacio, Colorado, battle 416 Fire flames over the weekend in this undated photo provided by the San Juan National Forest. The image was captured by a firefighter from Wyoming. San Juan National Forest
Fullscreen
Firefighters used flammable plastic spheres dropped from helicopters yesterday to set backfires in the Clear Creek area the 416 Fire Division H zone on the western edge of the fire. #416fireteam
Fullscreen 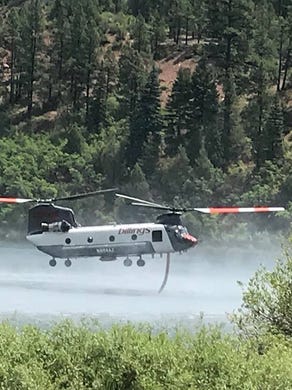 A Chinook helicopter that can drop up to 2,600 gallons of water hovers in the Fall Creek area, dipping its snorkel and pumping water up into an internal tank as it prepares to battle hotspots in the 416 Fire zone in this undated photo. #416fireteam
Fullscreen

Hotshot teams are seen starting fire operations in Division H on the southwest edge of the 416 Fire in this undated photo as crews work to burn underbrush ahead of the fire's advance. #416fireteam
Fullscreen

The 416 Fire team released this image June 28, 2018, of fire progressing in the Deer Creek and Elk Creek wilderness areas at the northwest end of the blaze. 416 fire team
Fullscreen

Operations Section Chief Alex Robertson of the Portland National Incident Management Organization shows the area where the 416 Fire made a run through some wildland before slowing again as he conducts an online operational briefing Wednesday morning. #416fireteam video capture
Fullscreen

Smoke from intensified fire activity in the Clear Creek Area was documented by the 416 Fire crew around 3:15 p.m. June 24, 2018, near Durango, Colorado. #416fireteam
Fullscreen

Communications Technician Brad Nelson performs maintenance on an overland network repeater, one of 10 on high locations that keep firefighters in contact with eachother as they battle the 416 Fire. Jacob Welsh/for 416 Fire team
Fullscreen

The crew members seen heading downhill are the Flagstaff Hotshots in this photo posted by the 416 Fire team on Facebook. New fire manager Alex Robertson, operations section chief of the Portland NIMO team, said many teams are rotating out after weeks of hard work. Joel Peters/#416fireteam
Fullscreen

A business owner's sign on Main Avenue in downtown Durango, Colorado, thanks firefighters who are battling the 416 and Burro fires. John R. Moses/Farmington Daily Times
Fullscreen

A firefighter is seen on the line of the 416 Fire near Durango, Colorado, in this undated photo posted by the 416 Fire team. #416fireteam
Fullscreen 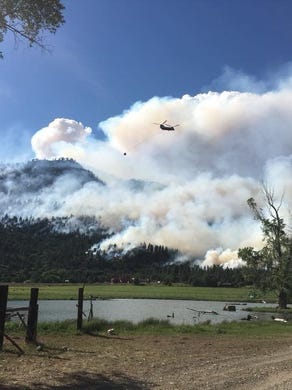 Maps like these were posted by the San Juan National Forest to allow the public to track the 416 Fire's spread. Rocky Mountain Incident Management Team
Fullscreen

Air and ground crews continue to battle the 416 blaze. This photo was taken by the 416 Fire team. #416fireteam
Fullscreen

Residents and businesses put up signs of support for the hundreds of firefighters battling the 416 Fire 10 miles north of Durango, Colorado. This undated photo is part of a gallery posted on Facebook by the #416 Fire Team. It can be viewed at http://bit.ly/2JpxhQG. 416 Fire team
Fullscreen

The Entiat Hotshots were flown on to Falls Creek Ridge by helicopter June 17, 2018 and were among the crews that constructed a fireline on the south perimeter of the 416 Fire. #416fireteam
Fullscreen

This is how the fire looked on June 1, 2018 from Highway 550 just below Glacier Point. USFS Public Information Office, San Juan National Forest
Fullscreen 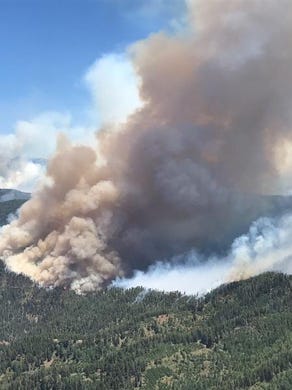 A brownish haze that began not far from Durango, Colorado's city limits hung in the air along the Highway 550 corridor on the way to Silverton June 29, 2018. John R. Moses / The Daily Times
Fullscreen 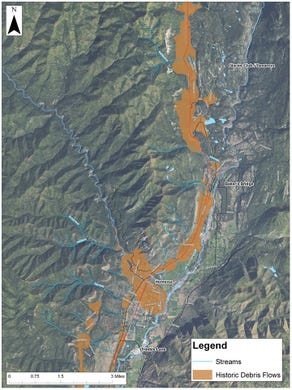 After the fire came the danger of floooding and mudslides. This is an example of warning maps documenting potential flood zones released  by La Plata County officials in July 2018. La Plata County, Colorado
Fullscreen

Sterrett said the approach of monsoon season is good news, but he noted it isn't necessarily a cure-all for the county's overall lack of moisture.

"The only downside to monsoons is, it might rain at the airport and not (anywhere else)," he said, referring to the often-spotty nature of those storms.