A red flag warning tells fire managers and the public that conditions are favorable for fire starts and the fast spread of existing fires. Wochit

AZTEC — The East Canyon Fire that has burned more than 2,700 acres in southwest Colorado behaved more moderately than expected on Tuesday, according to an update posted the evening of June 16.

"High winds did materialize and limited the use of the fixed wing aircraft but they did not cause the erratic fire behavior seen over the past two days," the update states.

The fire has charred acreage in both La Plata and Montezuma counties in Colorado and prompted evacuations as well as the closure of U.S. Highway 160 between Mancos and Hesperus. As of shortly after 9 a.m. June 16, it had reached 2,703 acres.

Firefighters are working to contain a small spot fire that started in the Cherry Creek Road area to the east of the road.

Crews were able to complete a dozer line to the northwest of the blaze and brought the fire to 5% containment on Tuesday.

Because there was not an infrared flight, officials have not been able to update the number of acres the fire has consumed.

Around noon, Deana Harms, a spokeswoman with the Bureau of Land Management, said the fire is 0% contained. However, she said it has not been pushing toward the highway like it did on June 15.

The weather remains a challenge as firefighters try to control the blaze amid hot, dry conditions and gusty winds. 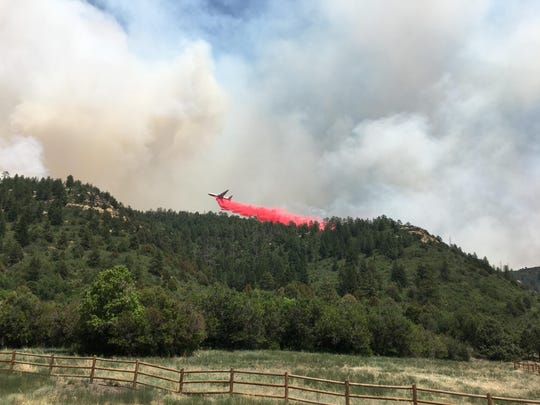 A plane drops retardant on the East Canyon Fire, Monday, June 15, 2020, in Colorado. (Photo: Bureau of Land Management via Inciweb)

"This could start heating up once again this afternoon," Harms said at approximately noon on June 16.

As of the evening of June 15, the fire was burning a mile south of the highway and had not spotted to the north side of the road.

Rocky Mountain Incident Management Blue Team, which is a type two team, is taking over management of the fire. According to an update released Monday evening, the complex nature of the blaze as well as the rugged terrain and the need for aerial resources prompted the decision to move from a type three to a type two team.

Harms explained a type two team is a larger organization with more resources. She said people in southwest Colorado will see a larger number of fire personnel.

While the highway was closed during the afternoon of June 15, it reopened that evening. However, smoke continues to impact visibility for drivers. The La Plata County Sheriff’s Office has asked drivers not to stop along the side of U.S. Highway 160 to take pictures of the fire as this creates additional obstacles for first responders trying to get to the blaze. 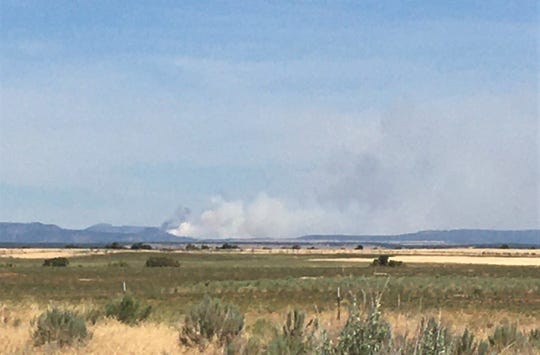 Harms said the Red Flag Warning is due to gusty winds and dry conditions.

The smoke from the East Canyon Fire, as well as other regional fires, prompted New Mexico officials to issue an air quality alert for the northern part of the state.