Cofounder Mike Fauteaux was looking for a way to promote his organization during the COVID-19 shutdown. 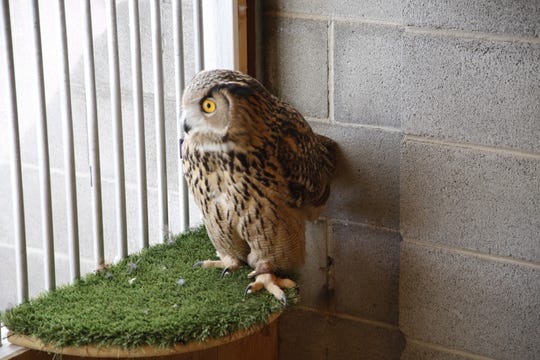 Spooky, a Eurasian eagle owl, will be featured in a series of presentations of Raptors Wild birds that cofounder Mike Fauteaux is planning in May at local nursing homes. (Photo: Mike Easterling/The Daily Times)

FARMINGTON — Like plenty of other organizations and businesses, Raptors Wild, an organization dedicated to the conservation and natural biology of wild raptors, is experiencing a major challenge to its business model as the COVID-19 shutdown stretches into its second month.

The Aztec-based nonprofit counts on the revenue generated from its live shows, "Wings Over the Rockies," to help cover the costs of its operations. But those shows also serve to keep the birds focused and accustomed to being handled by humans as they fulfill the educational aspect of the organization's mission.

So when the performances can't be staged, cofounder Mike Fauteaux said, Raptors Wild suffers on two fronts — financially and in terms of the birds' training.

"Most people don't realize nonprofits like ours, which are devoted to wildlife, are totally shut down," he said, describing the disruption to his organization's normal revenue streams.

But while Fauteaux can't do anything about the lack of funding, he has a plan for addressing the latter issue. He said he has been in touch with officials at nursing homes throughout San Juan County, and he plans to offer a series of free programs for residents of those facilities soon while respecting social distancing restrictions. 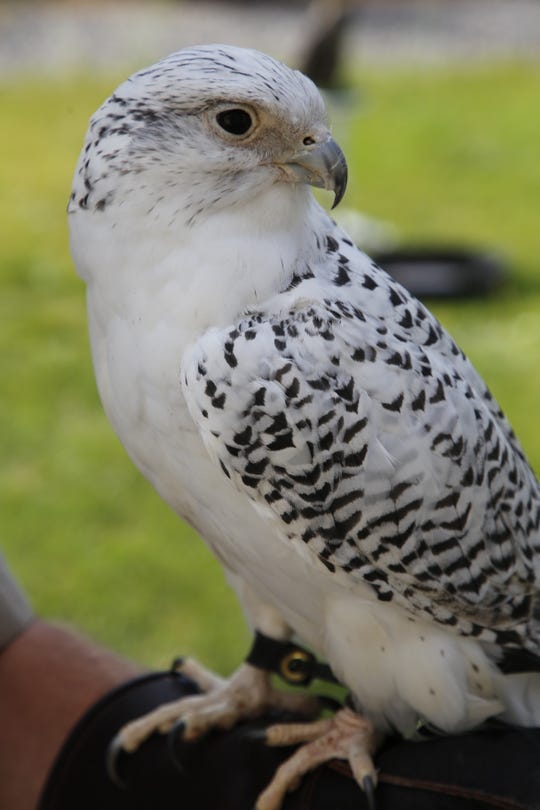 Fauteaux will take three or four of his Raptors Wild birds — including Spooky, a Eurasian eagle owl and Comet, a white, male gyrfalcon — to the facilities and walk the perimeter of each building. He stop to deliver a short presentation at each window with the residents watching safely from inside. He'll use an app on his phone to communicate with the residents inside the building, allowing them to ask questions about the birds.

Fauteaux, a former Aztec police officer, hopes the presentations offer a break from the tedium of the lockdown for nursing home residents and staff members. He also envisions the presentations helping spread the word about Raptors Wild. The organization was founded by Fauteaux and Greg Rabourn in 2018. They have amassed a collection of 20 owls, falcons and hawks, many of which have been retired from breeding programs.

The "Wings Over the Rockies" shows presented by the organization are done for school, youth, church and community groups, and include demonstrations of the birds' aerial dynamics and hunting abilities. Fauteaux said he had four shows scheduled for early April for school groups at the Farmington Civic Center, but those have been canceled because of the shutdown. The shows were to have been sponsored by local businesses, allowing students to see the presentations for free. 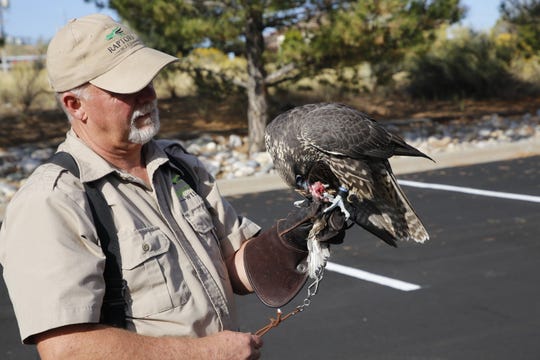 So Fauteaux began plotting some other way of showcasing his birds for the public that wouldn't involve putting anyone's health at risk. He especially liked the idea of doing something for residents of nursing homes, since those facilities have been hit hard by the spread of the virus and residents can't even be visited by their loved ones.

"I'm sure they're bored to tears there," he said. "Most of them are confined to their room."

"I wouldn't say they're bored," Fauteaux said of his birds. "But I'm bored."

Performing for various local groups allows the raptors to fall into a routine, he said. Fauteaux fears that if his birds are forced to go months between shows, the countless hours of training they have undergone will be forgotten, and he'll have to start from scratch with the raptors when the restrictions are lifted and the programs can resume.

Fauteaux plans to work with officials at nursing homes throughout the county to map out a schedule, then begin the visits in 10 days to two weeks.

One thing Fauteaux apparently doesn't have to worry about is his raptors being victimized by the COVID-19 virus.

"So far, nothing we've heard says they're susceptible to it," he said. "Birds can be a little more susceptible to some viruses, but not this one, it looks like. … Mine are all doing really well."

But Fauteaux is worried about how he is going to continue caring for his raptors. The cost of keeping the birds fed runs approximately $1,000 a month, he said, and though Fauteaux had a good supply of feed stock on hand when the shutdown began, he said he is rapidly running through that. In six to eight weeks, he said, that inventory could be exhausted.

Fauteaux said he takes no salary from the foundation, so all the revenue raised from the "Wings Over the Rockies" shows and the donations goes toward the birds' care. He encouraged anyone who supports the mission of his organization to consider helping out Raptors Wild until the shutdown is lifted and normal programming can resume.