The Bloomfield School District served more than 1,800 meals to students on March 19 despite challenging road conditions. The community helped out.

FARMINGTON — Efforts by Bloomfield School District staff to keep students fed during the coronavirus-caused shutdown were challenged by a recent round of wet weather in San Juan County, even as demand for the meals keeps growing.

District Superintendent Kim Mizell said a total of 1,822 meals were served to students across the district on March 19, meaning a high percentage of the district's approximately 2,700 students are taking advantage of the service.

Students are being served prepackaged breakfasts and lunches as part of the Supporting Schools Initiative mounted by the office of Gov. Michelle Lujan Grisham and the New Mexico Public Education Department.

Mizell said the program will continue over the next couple of weeks as the school closure remains in effect. She expects demand for the meals to increase as district families who left for a spring break trip return to the area.

Mizell witnessed for herself how eager some district families are for the help on March 19. The district is distributing the meals at Bloomfield High School and along several bus routes to remote areas of the county.

The superintended joined bus driver Kayla Macias on that day in delivering 116 meals to students in the Nageezi and Escrito areas on the Navajo Nation. 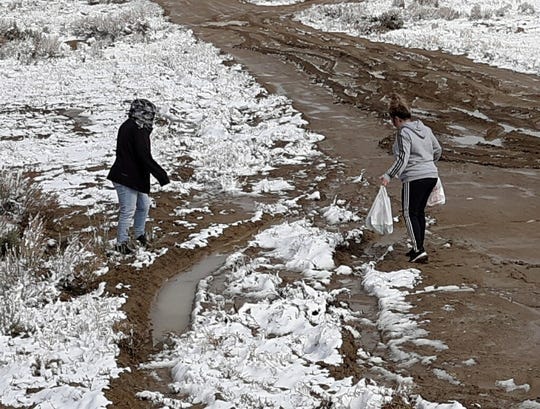 Superintendent Kim Mizell, left, delivers food to a student on a muddy road in the Escrito area on March 19. (Photo: Photo courtesy of Bloomfield School District)

It wasn't an easy trip, Mizell said, explaining the bus traveled 180 miles over the course of a four-hour trip to take food to hungry children. The journey was made more difficult by recent precipitation in San Juan County that left the dirt roads in the community so muddy that many of them essentially were impassable, she said.

"It's very difficult," she said. "If you don't have a four-wheel drive vehicle, you're in trouble, basically."

But the superintendent said the reward of seeing the food get to needy student has been well worth the trouble.

"They're thankful," Mizell said of the reaction of the families who greeted her and Macias at the bus stops. "I think the kids are happy. You could see it in their faces."

Coronavirus update: A Quarter Of All Americans Are Under Orders To Stay At Home

The district's system of delivering meals along bus routes is designed to feed students whose families lack transportation to the main food distribution site in Bloomfield. But for some residents of the Nageezi area, just getting to the bus stop is a major challenge.

"I saw one girl who broke my heart," Mizell said. "She had walked probably a mile and a half, and she was crying because she still couldn't get to the bus stop (because of the treacherous conditions). Every step you take, you almost fall."

Mizell eventually managed to get the food to the student. She marveled at the way so many people in that area have pitched in to help. She said a resident named Sarah Taylor has served as a community organizer, calling families to alert them about when the bus is coming and making sure everyone can get to a bus stop.

A young girl and her brother greet a Bloomfield school bus on March 19 in the Nageezi area as prepackaged meals were delivered to students in the area. (Photo: Photo by Kim Mizell/Bloomfield School District)

"She literally knows all the families and calls them," Mizell said.

If a family can't send someone to pick up the food, she said, other families are picking up the food for them and delivering it.

"Most places, we require to see the faces of the kids (being served), but there, it's just too difficult," Mizell said.

That assistance was invaluable, she said.

"We appreciated, out on the reservation, when people who got there when others couldn't delivered for us," she said.

A total of eight buses have been used in the district's effort. Bus drivers, and maintenance and staff members from throughout the district have given up their spring break to participate in the program, she said. 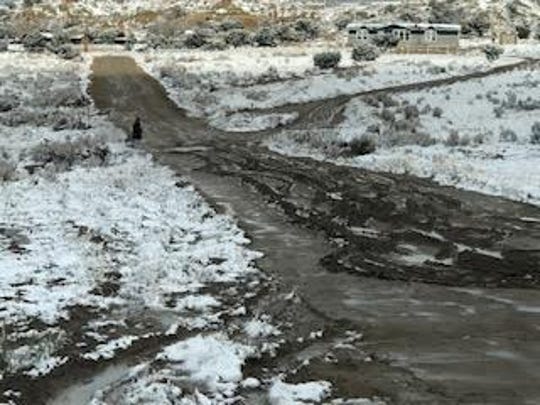 Muddy and snow-packed roads in the Nageezi area on March 19 hampered efforts to get prepackaged meals to the district's students. (Photo: Photo by Kim Mizell/Bloomfield School District)

"It's going really well, but everybody is tired by the end of the week," Mizell said on March 20. "We sent out additional meals for the weekend."

Mizell said the creation and implementation of the food delivery system on such short notice has been a difficult task for her small district to pull off. But she understands the district is playing a very important role in taking care of its students during the crisis.

"People in cities have no idea what parents out on the reservation do to get their kids to school and provide for their families or the distance they have to travel," she said.

Information about the program and a list of the bus routes and stops can be found on the district's website at bsin.k12.nm.us.