New Mexicans were victimized for twice as much money in online scams in 2019 as they were a year earlier.

A new MoneyGram study shows that a whopping 63 percent of people polled have been a victim of a scam! Buzz60

FARMINGTON — As bad as the numbers are for the cost of Internet-enabled crimes and scams in New Mexico, an FBI spokesman fears they don't give a true picture of the of the problem's severity.

A new report by the agency's Internet Crime Complaint Center (IC3) reveals that that 2019 was the worst year on record in the United States for the number of complaints received and the amount of money lost since the establishment of the center in 2000.

The figures for New Mexico reflect that trend in part. According to the report, the state had 2,037 victims last year, which represented a decline from the 2,127 people who registered a complaint in 2018. But the amount of money lost in 2019 — nearly $18 million — more than doubled the approximately $8.6 million reported in 2018.

So even though fewer New Mexicans reported being victimized last year, those figures show that the people who fell prey to Internet-based schemes were taken for considerably higher sums. Frank Fisher, the public affairs officer for the FBI's Albuquerque division, suspects that at least a few of them, in fact, were swindled out of very large amounts of money, driving up that total.

More: With the census approaching, state and county officials are focused on a complete count

"The numbers speak for themselves," Fisher said during a telephone interview a few days after the 2019 Internet Crime Report was released on Feb. 11. "The losses in New Mexico more than doubled over the previous year. That's why we want to get this out to people."

Fisher emphasized the importance of filing a report for anyone who has fallen victim to such a scheme. 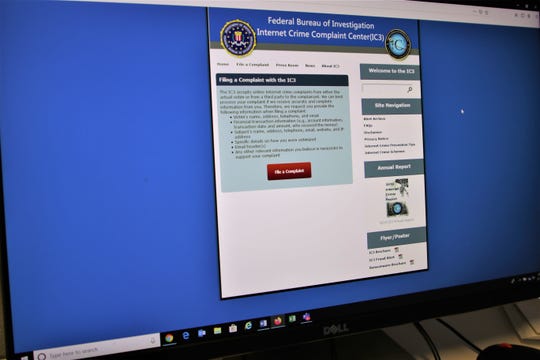 The FBI's online Internet Crime Complaint Center allows those who fear they have been victimized in an Internet enabled crime or scam to report the incident. (Photo: Mike Easterling/The Daily Times)

"The worst thing they can do is not report this," he said. "I have the feeling a lot of people are embarrassed and ashamed (about being victimized). So the numbers may actually be under-reported."

"I don't doubt that at all," he said. "I think he's (correct). There are definitely people who have had problems and don't report them because they're too embarrassed or too scared to report them."

It pays to be a skeptic

Lytle said he believes Internet criminals have grown much more sophisticated and efficient in their approach in recent years, ramping up the challenge for people like himself who are charged with keeping their community of users safe.

"If you go back five years and look at a (scam) email, you can look at all the misspellings," he said. "But now they're getting so efficient, their screens look just like your screens. … And they're asking the specific kinds of questions that make you think this could be legit."

Fisher said the problem of Internet-enabled crimes and scams is here to stay, given the fact that so much business is conducted digitally these days — something that isn't likely to change. He said many people have an unfortunate tendency to treat almost anything they see in the digital realm as legitimate when they should be very skeptical about it.

"People are trusting," he said. "They trust emails, they trust websites. But that's how they get in trouble and wind up losing quite a bit of money."

The IC3 report divides the reported crimes into nearly three dozen categories. New Mexicans most commonly were victimized last year in the nonpayment/nondelivery and extortion categories, with more than 320 cases each. But other categories were well represented, including harassment/threats of violence, personal data breach and confidence fraud/romance, with more than 100 reported instances of each.

The prevalence of the latter category is a symptom of the fact that so many people go looking for relationships online these days, he said, though he noted scam artists have always used romance to lure in potential victims — something that may have happened a lot last weekend.

"We do see an uptick (in reported cases) around Valentine's Day, but this thing goes on year round," he said. "We don't want people to get complacent once the holiday is over."

There were 130 cases reported in New Mexico in 2019 that fell into the category of phishing/vishing/smishing or pharming. Those involve a variety of approaches ranging from the use of fraudulent text messages to fake websites, and they demonstrate how innovative and imaginative some cons can be in quickly adapting to new forms of communication.

Lytle said there is no single category that appears to be more popular with fraudsters than others.

"It's all up — all these 'ishing' things are definitely up," he said. "We try to build our systems so we catch as much of it as we can."

Fisher said the FBI doesn't provide a county-by-county breakdown of the New Mexico figures, partly to maintain the anonymity of victims, so there is no way of knowing whether local residents are being taken advantage of in the digital realm to a greater degree than other New Mexicans.

Besides, he said, the location of victims is irrelevant to those who run such scams.

"It doesn't matter if you're in San Juan County or Dona Ana County — these criminals will go after you anywhere," he said. "And we wouldn't want to release figures that give people the impression that just because there are no (reported) cases in San Juan County, the people there aren't vulnerable. Everybody's susceptible. Everybody's vulnerable."

That characterization certainly seems to apply to one group of New Mexicans more than others. People age 60 or over were victimized far more often than any other age group in 2019 — and at much greater cost. There were nearly 500 reported cases last year from that age group, almost twice as many as any other age group. And they were victimized for more than $13.5 million — more than five times as much as the second-place group.

How to protect yourself from scams

Awareness and education are the two best defenses against falling victim to an Internet-enabled scam or crime, Fisher and Lytle said.

Fisher advocates the need for computer users to practice "good Internet hygiene" to minimize their chances of being taken advantage of, meaning they need to be very careful about protecting their passwords, Social Security number, date of birth and other personal information.

He said anyone who suspects they have fallen prey to an Internet-related scam should immediately report the incident to their bank or credit card company and see if they can stop the transaction from occurring. They should also log on to IC3.gov, where they will be directed to a link through which they can report the incident. That report then goes out to multiple law enforcement agencies.

Lytle advised Internet users to be cautious about using public wi-fi and take the precaution of working through a VPN when doing so. He said it's a good idea to delete any old apps you aren't using anymore, keep your anti-virus software up to date and constantly audit your bank, retirement to credit card accounts for unusual activity.

"No system is perfect," he said. "It's very much about education. We teach awareness of it. If it sounds too good to be true, it probably is."

He encourages students, faculty members and staff members at the college to approach him or his department directly if they have any concerns about a message they have received in any form.

"Any time you are unsure, what I tell people is, call and ask," he said, adding he doesn't mind investigating reports that turn out to be false alarms. "Our help desk will always take a phone call. Call them. Call me."

Fisher knows there is no way to eliminate all such scam activity, but he believes it is possible to make a significant dent in it.

"Even one victim is too many," Fisher said. "We would like to see the numbers for next year fall precipitously."