Work on the Complete Streets project will get underway Jan. 6, but street closures will begin next weekend. 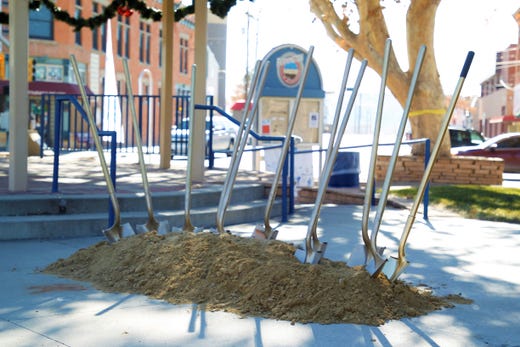 Props are set up for the groundbreaking ceremony for the Complete Streets Project in Orchard Park in downtown Farmington on Dec. 20, 2019. Sam Ribakoff/Daily Times
Fullscreen 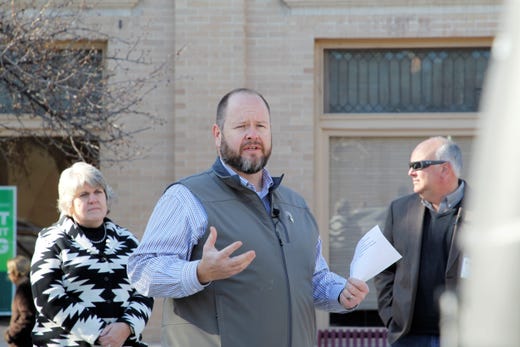 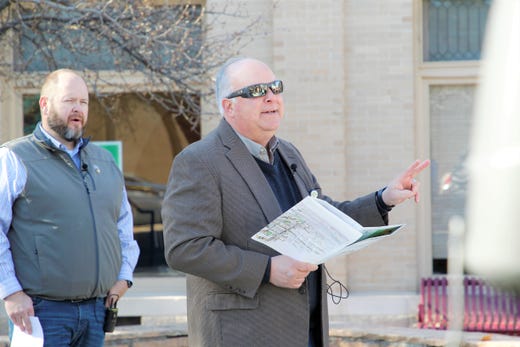 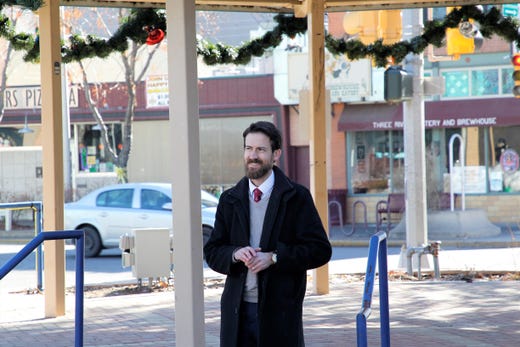 Director of ORII and Economic Development Warren Unsicker looks on at the groundbreaking ceremony for the Complete Streets Project in Orchard Park in downtown Farmington on Dec. 20, 2019. Sam Ribakoff/Daily Times
Fullscreen 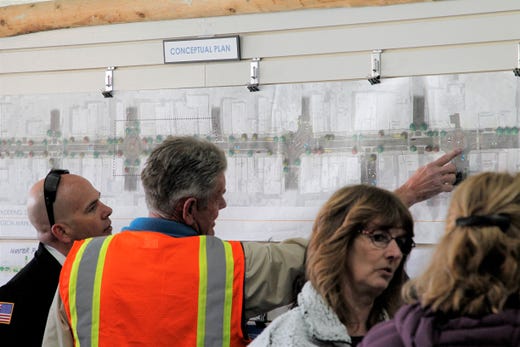 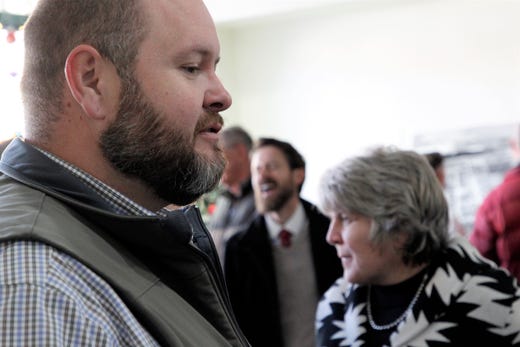 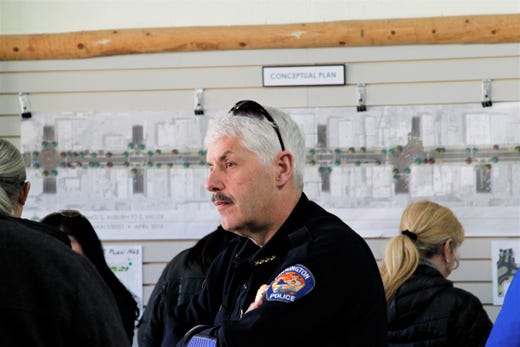 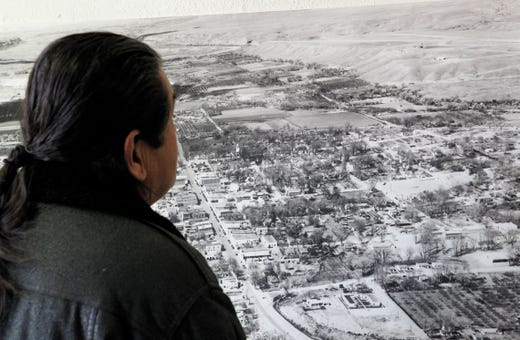 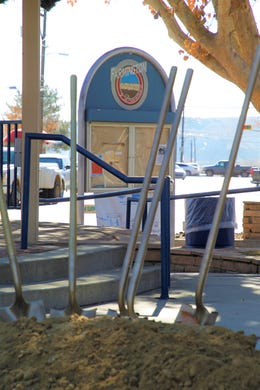 Shovels are arranged for the groundbreaking ceremony for the Complete Streets Project in Orchard Park in downtown Farmington on Dec. 20, 2019. Sam Ribakoff/Daily Times
Fullscreen

FARMINGTON — If you're fond of the way downtown Farmington looks now, you might want to capture a mental or even literal image of it — it's never going to look the same again.

With construction on the district's long-awaited Complete Streets renovation set to begin Jan. 6, 2020, downtown street closures will begin to take place this week as city workers start to prepare the site.

On Dec. 29, the second phase of the closures will begin. Main Street will be closed between Behrend Avenue and Auburn Avenue, and Locke Avenue will be open for northbound and southbound traffic only, according to the release.

The Complete Streets project is intended to transform the district by making it more pedestrian friendly and attractive. Main Street will be reduced from a four-lane thoroughfare with only parallel parking to a two-lane street that also features diagonal parking.

"The walkability that will come to downtown is going to be the biggest thing," said Warren Unsicker, director economic development for the city of Farmington. "This is going to calm traffic. People are going to be able to turn their heads and see the businesses while driving through downtown instead of blazing through it. It's going to have almost an outdoor mall feel."

A change is going to come

According to a formal project notice sent by the city to downtown property owners on Dec. 13, the work also includes landscape improvements, such as increased traffic and pedestrian lighting, wider sidewalks, the removal of signalized intersections and the construction of single-lane roundabouts. It also includes the installation of an irrigation system, the installation of an increased electrical supply for large events and seasonal lighting needs, an outdoor speaker system, free public Wi-Fi services, water line replacement and storm drain improvements.

That work will start shortly after the beginning of the new year, and city officials expect it to be "substantially complete" by Nov. 1, 2020, according to the formal project notice. A groundbreaking ceremony to kick off the work was held Dec. 20 in Orchard Park.

The project notice states the work is to be performed between 7 a.m. and 7 p.m. daily, although work exceeding those hours may be necessary. The city promises in the letter that pedestrian access to building fronts will be maintained throughout construction, although minimal closures will be required to replace sidewalks. When that happens, business owners and residents will be notified in advance, the document states, and the contractor will be expected to provide temporary walkways across unfinished surfaces. 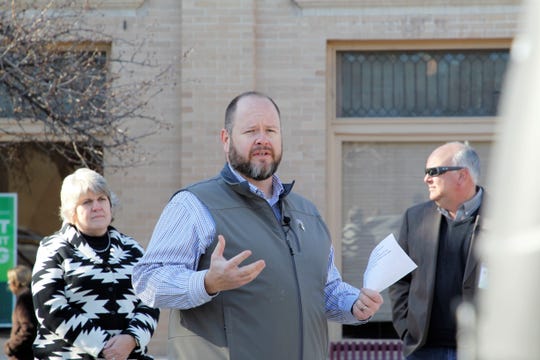 With that reduced access on Main Street, the city emphasizes that all public parking lots and alleys in the district will remain open during the construction. Vehicular access between Broad Avenue and Arrington Street will be provided for the duration of the project by way of Allen Avenue or Orchard Avenue.

Downtown merchants who have a back door to their business have been encouraged to do all they can to enhance and emphasize those entries to maintain ease of access for customers.

The Art in the Alley mural project initiated in March 2018 and funded by a $25,000 grant from the philanthropic foundation of the Merrion family has led to the creation of nine murals in alleys throughout downtown. It was launched specifically with the Complete Streets project in mind as a way of making those back entrances more attractive.

When low water pressure situations or water outages are expected, AUI is required to distribute door hanger notifications to all residential and commercial customers at least 48 hours in advance, the project notice states.

Roach's press release and the circulation of the formal project notice were the most recent efforts by city officials to alert downtown business owners, residents and visitors of the changes that are coming to the district. Unsicker said the city organized a series of classes to advise merchants on how to survive during the construction, which is expected to have an adverse impact on the number of downtown visitors. 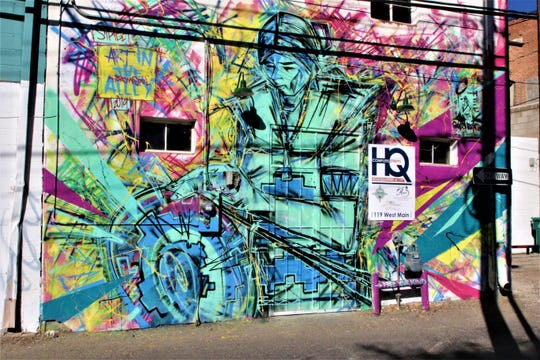 The Art in the Alley project, which includes this mural behind the Complete Streets headquarters, was designed to encourage businesses to make their back entrances more attractive to pedestrians in advance of Complete Streets construction. (Photo: Daily Times file photo)

Unsicker said the city has done a terrific job of educating people about what to expect, but he still expects some confusion as the work unfolds.

"We can alert as much as we want, but people are still going to have questions, and we're here to answer them," he said.

City officials will monitor the work to make sure the impact on downtown businesses is kept to a minimum, he said.

"We are diligently working with the contractor and the merchants to make sure this is as painless as possible," he said.

While some downtown merchants have expressed worries about what the lengthy construction and reduced access will mean for their sales, Karen Ellsbury, owner of the Studio 116 art gallery at 116 W. Main St., said she appreciated the lengths the city has gone to prepare business owners for the changes.

"I think they have done their best to let people know what's happening and when it's happening," she said.

Ellsbury said she isn't worried a potential decline in customer traffic, citing the investment she has made in enhancing her back entrance through the creation of a pocket park called the HEart Space. That area, which adjoins an alley and a large, well-lit public parking lot, features a stage, a pergola, planters, lighting, artwork, seating, landscaping and murals.

Ellsbury and her husband, Patrick Hazen, also purchased another downtown building at 305 W. Main St. approximately a year ago and are using a $7,000 grant to renovate an outdoor events space adjoining an alley there. She said with the planned closure of Main Street, she likely will close the doors at Studio 116 for the last week of the year and focus her efforts on completing that project, dubbed the Hidden Garden. 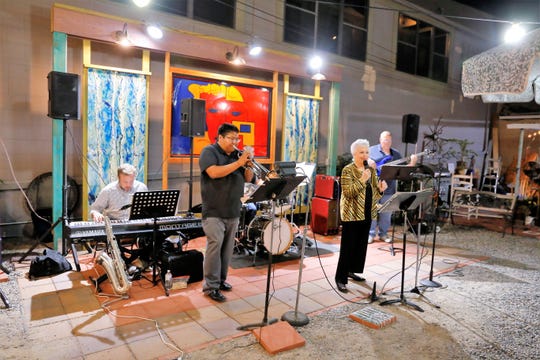 The HEart Space behind Studio 116 has been transformed into an attractive outdoor events space and inviting back entrance to Karen Ellsbury's art studio. (Photo: Daily Times file photo)

"We do have all our ducks in a row, more or less," she said, noting the deadline for completing the work is Dec. 31.

Work on the project thus far has consisted of upgrading the sewer and water lines, digging up some of the existing concrete and asphalt and building footers for a 12-foot-by-35-foot deck. Overhead lighting also has been added. As the deadline nears, the deck and some decorative planters will be completed, and Ellsbury hopes to add seating, landscaping and shade structures in the future.

"Life is a gamble, but, yes, we are gambling on downtown because we're getting a lot of positive feedback from people passing through," she said, voicing the hope that downtown Farmington someday can begin to rival neighboring Durango, Colorado, for tourism. "We feel like we are perched on the edges of something exciting."

Ellsbury said she and Hazen were not afraid to continue investing in the downtown district because they see its potential.

"We believe we are helping create an identity for Farmington that can help us attract people who want art and culture. We're excited to be at the heart of the city."

The back door may not be the answer

Craig Gjedde, one of the owners of Game Changers, a gaming business located at 217 W. Main St., is taking a wait-and-see approach to the potential impact of the construction on his business. When asked if he expects the work to affect his traffic, he said, "How can it not?" 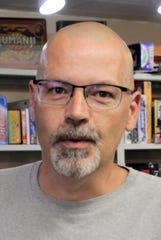 But he also noted that his business has a niche clientele, and he has tried hard to communicate with his customers about what to expect.

"I don't think it's going to affect us negatively," he said.

Game Changers does have a back entrance, but Gjedde said the area has not been open to the public, and it would require some clean-up work to prepare that space for that function. He also noted he likely would have to relocate his cash register in order to have a view of the front and back doors, and that may be impossible to do.

"We really don't have a shoplifting problem, but I don't want to create an environment where I tempt anybody," he said. "We're going to play that one by ear and see what happens."

Gjedde isn't concerned about the lack of Main Street parking during the construction, explaining that many of his customers tell him they already prefer to park in the lot behind his business because they dislike parallel parking.

In the long run, Gjedde is optimistic about the potential for Complete Streets and welcomes the launch of the work, noting that he's been hearing about it since his business opened in 2015.

"Oh, absolutely," he said. "Anything to make it more user friendly is going to help. The landscaping will certainly help. … A year from now, when all is said and done, I just hope the rent doesn't go up. That's the flip side of this."

Online information about the Complete Streets project can be found at fmtn.org/633/City-Enhancements, fmtn.org/681/Main-St-Complete-Streets-Construction and fmtn.org/list.aspx.