The U.S. Department of Energy contracted with Los Alamos National Laboratory for an independent look at carbon capture at San Juan Generating Station.

The preliminary assessment does not evaluate non-technical aspects such as costs, financing and regulatory changes

FARMINGTON — A Los Alamos National Laboratory preliminary assessment states that, from a technological standpoint, Enchant Energy could successfully retrofit the San Juan Generating Station with carbon capture and keep it open after 2022.

This assessment was released on the Los Alamos National Laboratory website on Dec. 13. The U.S. Department of Energy contracted with Los Alamos to provide an independent analysis of the proposal.

The report is not a detailed engineering assessment and relied on publicly-available information, including the Sargent & Lundy pre-feasibility report completed earlier this year. The Los Alamos team did not assess non-technical aspects such as costs, financing and potential regulatory changes.

In a press release, Farmington Mayor Nate Duckett said the report's conclusions were positive in key areas important to the project's success including the technology for carbon capture, the use of carbon dioxide for enhanced oil recovery and the regional opportunities for use and storage of the captured carbon dioxide.

“The Los Alamos Laboratory team has the world class technical knowledge and experience needed to conduct this assessment," he said.

More: Enchant Energy CEO: 'This area could become a leader in CO2 in the world'

The assessment was performed by a team of 10 scientists and engineers.

"The independent assessment by Los Alamos Laboratories is supportive of many of the important conclusions of the Sargent & Lundy study," said Peter Mandelstam, the chief operating officer of Enchant Energy in a press release. "This report positively addresses many of the concerns that have been raised by those critical of the project."

Here are some key takeaways from the report.

The biggest takeaway from the report is that, from a technological standpoint, the proposal for the San Juan Generating Station has promise. This is because Enchant Energy would use a mature technology that has been utilized by a variety of industries, although it has had limited applications on coal-fired power plants.

Two large-scale coal-fired power plants are currently using the technology and the Los Alamos team gathered information from both power plants as it performed the assessment.

This technology uses an amine — a product that binds to carbon dioxide — to extract the carbon dioxide from the flue gas stream after the coal has been burned.

Water flows into an evaporation pond, Monday, Oct. 28, 2019, at the south side of the San Juan Generating Station in Waterflow. (Photo: Hannah Grover/The Daily Times)

Los Alamos’ assessment also included a section on the Kemper Project in Mississippi, where a carbon capture proposal was ultimately abandoned after the cost ballooned from an initial projection of $2.88 billion to more than $7.5 billion. In the assessment, Los Alamos states the Kemper Project is not relevant from a technical standpoint to the San Juan Generating Station retrofit because it used pre-combustion technology, which is not as developed. In addition, Los Alamos states the decision not to pursue carbon capture was driven by several factors unrelated to the carbon capture technology.

To meet the requirements of the Energy Transition Act, Enchant Energy would have to process 60% or more of the flue gas, which would result in capturing at least 54% of the carbon dioxide emissions, according to the report.

More: Federal government will fund most of study related to power plant retrofit

At the crux of Enchant Energy’s plan is the ability to sell the carbon dioxide for use in the oil fields. The carbon dioxide could be injected into a reservoir to force oil and natural gas out of the ground.

Currently, carbon dioxide from the McElmo and Doe-Canyon Dome formation near Cortez, Colorado, is shipped through a pipeline that runs about 20 miles away from the San Juan Generating Station. 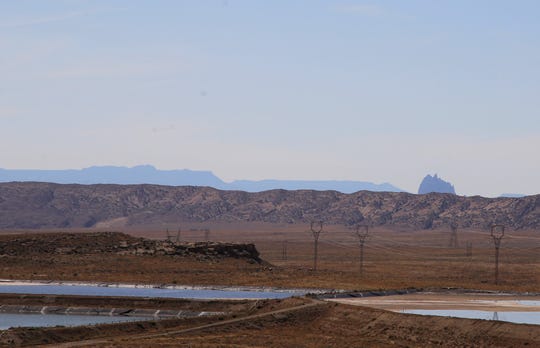 Los Alamos states that the captured carbon dioxide could, in principal, be accommodated by the Cortez pipeline. However, it would compete with the extracted carbon dioxide from McElmo and Doe-Canyon domes.

Los Alamos suggests additional assessment of the likelihood of securing access to the Cortez pipeline for the full amount of captured carbon dioxide.

However, Los Alamos’ assessment found there is demand in the Permian Basin for carbon dioxide and that using captured carbon dioxide in lieu of naturally occurring carbon dioxide could result in a net decrease in oil-associated emissions.

Potential exists for carbon dioxide use, storage in the Four Corners

Carbon dioxide that is not used could also be placed into permanent storage. Enchant Energy could take advantage of larger tax credits by storing the carbon dioxide. 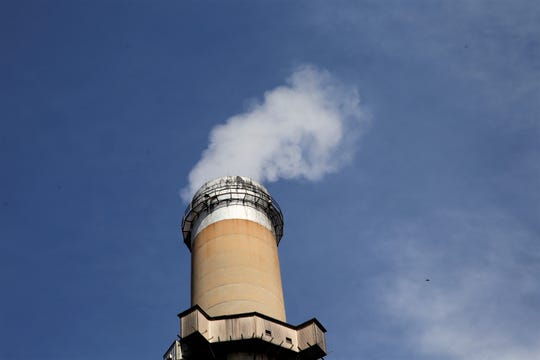 Water vapor and carbon dioxide are the main things that come out of the units at the San Juan Generating Station following multiple environmental upgrades over the years. (Photo: Hannah Grover/The Daily Times)

One potential Los Alamos highlights for storing carbon dioxide is mineralization. Carbon dioxide reacts with magnesium, calcium and iron to form products a solid, stable product that could be returned to the San Juan Mine during the reclamation process.

Use of existing infrastructure could reduce costs

The assessment states the use of existing infrastructure from the decommissioned units 2 and 3 could reduce the project costs.