Farmington is more than 3 inches below its normal precipitation total for the year, but conditions could improve as Thanksgiving nears. 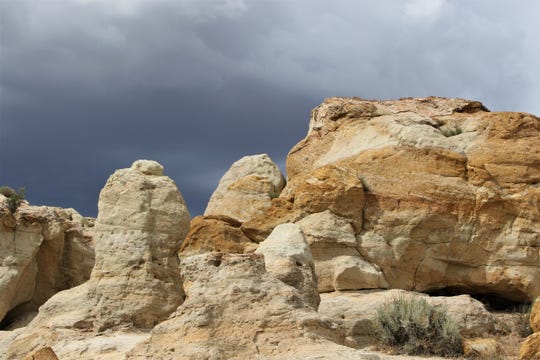 FARMINGTON — If you enjoyed San Juan County's wet start to 2019, you might be well advised to savor it. If you haven't noticed, it's over.

The moisture-packed start to the year that culminated with a late-season snowstorm on May 20 is now a distant memory, with San Juan County now firmly locked in severe drought status again, according to the U.S. Drought Monitor.

An exceptionally dry summer was the culprit, according to Brian Guyer, a meteorologist with the National Weather Service in Albuquerque.

"As we went through the summer, the monsoon flow never really impacted the Four Corners region at all," he said.

San Juan County is part of an area that includes most of southwest Colorado, southeast Utah and almost all of northern Arizona that has been classified as suffering from severe drought, according to the U.S. Drought Monitor map. That makes the region one of the driest parts of the country.

Only a handful of isolated patches of central and south Texas are in worse shape in the United States, with those areas having been designated as being in extreme drought — just one step above the worse classification of exceptional drought. Several other parts of Texas, Oklahoma, Kansas, Alabama, Georgia, South Carolina and Florida are also locked in severe drought, which is the third-worst designation

That characterization is nothing new for San Juan County, which has been in severe, extreme or exceptional drought for much of the last two years. But a cold, wet first five months of 2019 quickly ushered the county out of that status and raised hopes that that very dry status would not return for a while.

Those hopes were dashed when the moisture stopped falling after that May 20 storm. At that point, Farmington already had seen 5.5 inches of precipitation for the year. 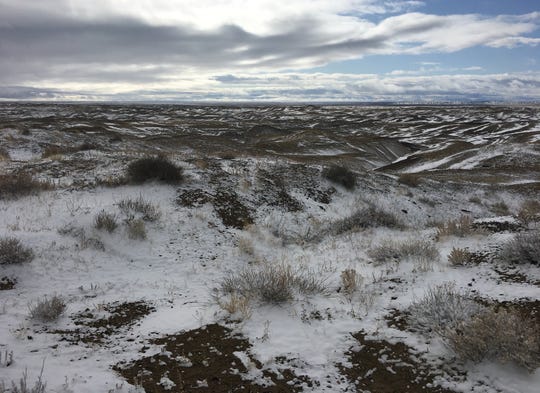 A dusting of snow covers the ground near Navajo Route 5 in the Tiis Tsoh Sikaad Chapter on Oct. 28, but that little bit of moisture did little to improve San Juan County's drought conditions. (Photo: Noel Lyn Smith/The Daily Times)

The monsoon season was beyond disappointing. Farmington received only 0.13 inches of precipitation in June, July and August, a fraction of what it normally receives during what historically is one of the wettest periods of the year.

"Even if (that 0.13 inches) fell in one event, that kind of rainfall evaporates in minutes on the ground once the sun comes out," Guyer said.

Those dry conditions were alleviated only marginally by the start of fall, as the city drew 0.39 inches in September and 0.17 inches in October. But Guyer noted that wasn't enough to stop the severe drought designation from beginning to creep back into the county in late September. By the end of October, he said, it had enveloped virtually the whole county.

The immediate outlook doesn't provide much reason for optimism.

"As of the first week of November, there is no indication of precipitation for the Four Corners region through next week," he said.

But sky watchers could see conditions improve as Thanksgiving nears.

"The long-term forecast indicates things will become more active as we approach the third week in November," Guyer said. "We could see some beneficial rains across western New Mexico."

Still, the occasional storm won't do much to erase long-term drought concerns, he said. 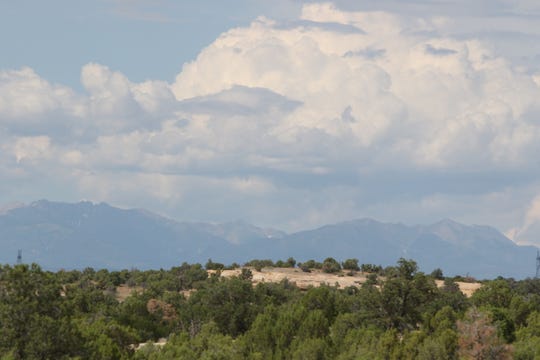 With monsoon rains in short supply over the summer, San Juan County has fallen back into the severe drought designation it escaped last spring. (Photo: Mike Easterling/The Daily Times)

"It will take many of these storm systems producing a quarter-inch or half-inch of rain week after week for us to get out of these drought conditions," he said.

Guyer said a hydrologist in his office likened San Juan County's condition to that of a patient who gets out of the hospital after suffering a major illness or injury and who is still recovering when he or she is afflicted again.

The plentiful snow that fell here last winter was the product of an El Niño weather pattern in the Pacific Ocean. Guyer warned local residents not to count on the same pattern developing this year.

"There were some indications (of that) initially, but now we're in neutral conditions — which isn't a bad thing," he said, noting that neutral pattern can sometimes lead to good winter precipitation.

Moderate drought or abnormally dry conditions have been designated for most of the rest of New Mexico, with only the southwest corner escaping any negative status. But Guyer said the Four Corners is experiencing the driest conditions by far.

As winter approaches, it's hard to know what to expect from the skies, he said. The last three winters have brought wildly different results — with a bone-dry winter of 2017-2018 sandwiched by very winters a year earlier and a year later — and Guyer said that trend may continue.

"I would say just to expect the variability to continue to grow, which is taxing on resources," he said, noting how those conditions can lead to surges in wildfires, flash flooding and poor air quality. "While every year may not be warmer and drier, the trend in the long run is expected to be in that direction."

That's not good news for a region where moisture isn't found in abundance even during normal times, he said.

"The Four Corners is already a desert environment," he said.

Craig Daugherty, chief of the San Juan County Fire Department, said conditions in the county deteriorated noticeably last month with the first freeze in the region, which knocked the remaining greenness out of the vegetation.

"This time of year has become one of our mini fire seasons," he said. "In fact, we had a pretty good fire (Nov. 7) out near (Navajo Agricultural Products Industry headquarters south of Farmington) that burned 7 acres and displayed some pretty impressive fire activity for early November. So the fuels are definitely dry."

Daugherty said the moisture has dropped out of the deciduous trees in recent weeks, leaving them more susceptible to fire in this period before the winter moisture historically begins to arrive.

Daugherty said the county essentially is on the edge of being in severe fire danger again, but he said the lower temperatures and reduced daylight that come with this period on the calendar help reduce the odds of a major blaze developing.

On the other hand, increased use of wood-burning stoves and fireplaces can create hazards of their own, he noted.

"The times when people are disposing of ashes are dangerous, especially when they get used to doing it in the same spot," he said. "Historically, most years, that wouldn't start a fire. But it could definitely start a fire this year. We just want them to understand that and be safe. We're in that pattern that's definitely different than last year."

Daugherty advised those disposing of ashes to keep a water source nearby and to call 911 immediately if a blaze does get away from them.