Aztec and Bloomfield school districts are hoping voters approve mill levies in November after similar measures were rejected in February. 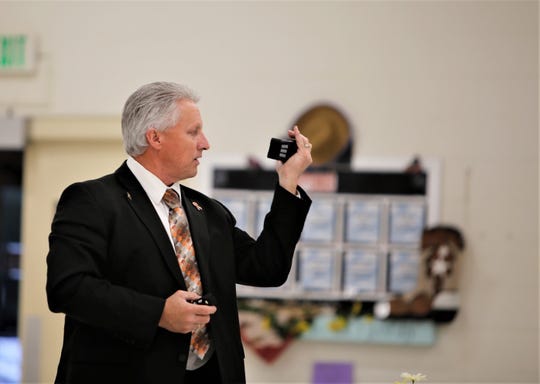 Aztec Municipal School District Superintendent Kirk Carpenter holds up a radio and says it saved lives during the Aztec High School shooting. Carpenter said the radio was purchased using mill funding, which will be on the ballot in November. (Photo: Hannah Grover/The Daily Times)

The Aztec Municipal School District mailed out postcards to people within district boundaries encouraging them to vote for the 1.886 mill levy, which has been in place since 2013 and is scheduled to expire in January. The mill levy generates $1.3 million which pays for school safety, software, technology, classroom needs and school maintenance.

The school district states there could be a 0.8 percent increase in property tax if it passes, however if it does not pass there won’t be after school programs and there will be fewer athletic programs and larger class sizes.

Meanwhile, Bloomfield Municipal School District is asking voters to approve a 2-mill levy, which would replace an expiring mill levy of the same amount.

Like Aztec, Bloomfield relies on this mill funding for school safety, software, technology, classroom needs and school maintenance. It has had the mill levy in place since 2013.

The mill funding is not used to pay salaries, but school district officials say they will have to find other areas to cut if the mill levy does not pass.

This is the second time this year that voters in the two school districts have been asked to either approve or reject extending the mill funding.

In February, Aztec asked voters to approve a 2-mill levy. When that failed, the school district reduced the amount to the existing 1.886 mills and is once again asking for approval.

Meanwhile, Bloomfield is asking voters to approve a 2-mill levy after the voters rejected the same measure in February.

However, the February election was conducted by mail ballot and turnout could be different in November.