Sheldon Pickering prepares to release third album in less than 18 months, one he hopes will will showcase his evolution as an artist in recent years. 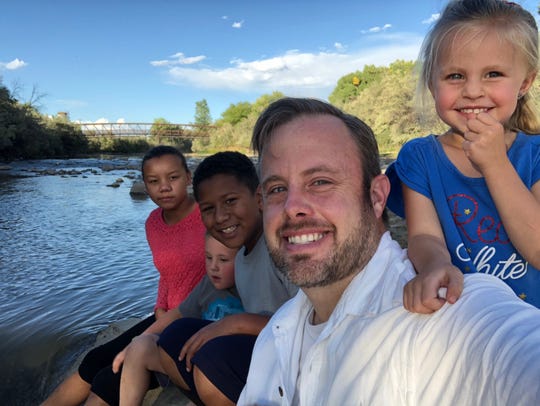 FARMINGTON — When he thinks about the genre of music with which he wants to be identified, and the artists he respects and enjoys being compared to, Sheldon Pickering hesitates only slightly before citing the smooth jazz group Acoustic Alchemy.

That's not to say Pickering, a local pianist, composer and arranger, is drawing a direct comparison between himself and the esteemed British group that has carved out a career of 30-plus years and earned multiple Grammy nominations.

"We're not there yet," he said, chuckling. "But we're a lot closer than we used to be."

Pickering believes his soon-to-be-released new instrumental disc, which remains untitled, will showcase his evolution as an artist in recent years. This will be Pickering's third release in less than 18 months, coming on the heels of "Along for the Ride" in spring 2018 and "Blessed Assurance" in July.

"It's a real level up, production wise," Pickering said earlier this week during a telephone interview from Pinedale, Wyoming, where he is serving as the music director for a community theater production of "Beauty and the Beast" that opens this weekend. "I think people will be surprised."

The new disc places Pickering firmly in the contemporary jazz genre, a departure from the New Age style he explored on "Along for the Ride" and the gospel of "Blessed Assurance." He acknowledged the recording is perhaps the most commercially accessible album he's ever made and reflects his efforts in recent years to reach a national audience. 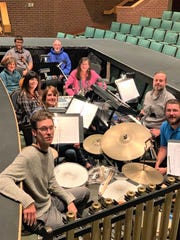 Musical director Sheldon Pickering, second from right, rehearses with the orchestra he has assembled for the Pinedale (Wyoming) Community Theatre production of "Beauty and the Beast." (Photo: Photo courtesy of Sheldon Pickering)

Pickering has recorded 15 original songs for the collection, but he said he likely will trim the album to only nine cuts as he targets a release date of around Thanksgiving.

"I'm working on that," he said. "That's the one piece of homework I have."

Stylistically, the disc may differ from the New Age sounds of his 2018 release, but Pickering described them as thematic cousins.

"It's basically music for the journey, so it follows in the footsteps of ("Along for the Ride)," he said. "So much of my music is inspired by the places I've been."

The new disc finds Pickering working once again with old friend and collaborator Maurico Espinal, a Farmington resident who recently returned to his native Honduras while his application for a new visa is processed. It also features acclaimed Salt Lake City guitarist Michael Dowdle, a successful Christian and jazz recording artist and composer whose work has been featured in countless film and television projects over the years. Dowdle has performed with the likes of the Beach Boys' Brian Wilson, the Coasters, Donny Osmond, Marie Osmond, the Mormon Tabernacle Choir, and Will Lee and Anton Fig, longtime fixtures in the house band on the "Late Show with David Letterman."

"He's one of the top guitarists in the world, and it was a real honor to play with him," Pickering said.

Taking a different approach to the recording process this time, Pickering chose to work from home on most of the material rather than renting studio time. He noted the pressure that comes with recording in a commercial setting, where budgetary limitations can put a real strain on creativity.

"You have to make the most of your time there," Pickering said of studio recording, explaining he wanted to be able to work at a more deliberate pace this time. "So it's been kind of nice because it's kind of relaxed."

That tension-free tone is evident in the music, he said, and that helps separate this disc from its predecessors. Pickering hopes the project brings his work to the attention of a new, wider audience, but he is careful about the amount of touring he does, strongly preferring to perform in situations that don't require him to be separated from his family for long. 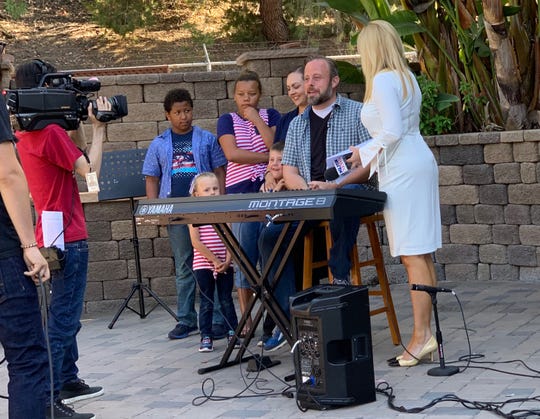 Sheldon Pickering performs "America the Beautiful" live on television while members of his family watch during a performance in San Diego over the summer. (Photo: Photo courtesy of Sheldon Pickering)

"If I could take my family with me, I would probably do a lot more (touring)," he said.

Pickering said his experience in Wyoming has allowed him to do that, as he recently got to spend several days with his 4-year-old daughter in Pinedale, a scenic community south of Grand Teton and Yellowstone national parks, and the resort town of Jackson.

When he returns to New Mexico, Pickering will have only a few days at home before he heads south to Honduras, where he will be performing at an Oct. 30 benefit concert arranged by Espinal for a scholarship program for students attending a private academy. After that, Pickering will settle on the final selections for his new disc and begin planning his annual Christmas concert here before heading off to Bethesda, Maryland, to perform at a National Institutes of Health event.

In the meantime, he's enjoying the work he's doing for the Pinedale Community Theatre, comparing it to his experiences three or four years ago when he performed a similar role for Farmington's Sandstone Productions company.

"It's a process when you get an orchestra together, especially in a show like this, where the music is everything," he said. "And some of the players aren't used to improvisation. Some of the players are perfectionists, but others aren't as experienced, and they can get frustrated because it's complicated music."

The orchestra Pickering has compiled for the show includes another keyboard player in addition to himself, allowing him to indulge in that improvisation — something he rarely gets to do in a live setting.

"I don't have to pound out all of the piano parts," he said, explaining he relishes the opportunity to contribute some "sparkly" aspects to the sound. "It's really cool to be able to add some of those elements."