The Cline family operated a Farmington bakery until it burned down in 1910. They later ran a Fruitland trading post in early 20th century. 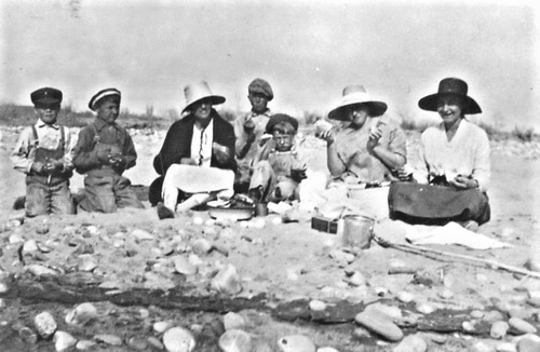 Jack Cline, left, and his mother Olive Cline, right, are pictured with the Hatch brothers and their mother in this photo, circa 1915. (Photo: Courtesy of Judy Cline)

FARMINGTON — The granddaughter of a pioneering Farmington merchant and trading post operator will offer some insights into her family's past this week in a presentation during a San Juan County Historical Society meeting.

This will mark the first time Cline has delivered the presentation, which she was asked to deliver by the society's Patty Tharp. She said unlike several other families long associated with trading posts in the region, the Clines had never completed a comprehensive family history, and Tharp's invitation for her to speak prompted her to undertake that task. 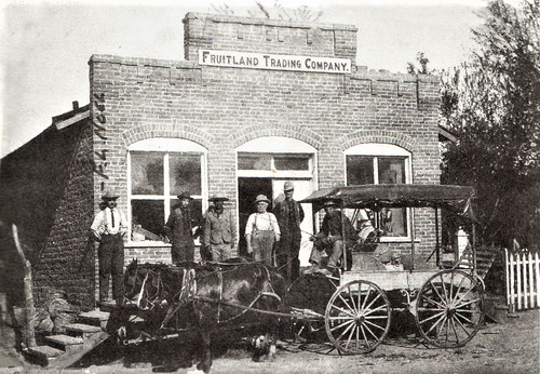 Frank Noel, left, and Eli Rufus Cline, fourth from left, stand alongside several other men outside the Fruitland Trading Company in this photo, circa 1908. (Photo: Courtesy of Judy Cline)

Cline will relate the story of how her grandfather Eli Rufus Cline operated the Cline Bakery on Main Street in Farmington until it burned in 1910. He then became part of a partnership that owned several trading posts, eventually becoming sole owner and operator of the Fruitland Trading Post.

That venture would remain in her family for decades, passing into the hands of her father, Jack Cline, and, upon his death, her mother and brother before the family finally sold it in 1971.

But Cline's presentation will be as much about her personal recollections as it will be about dates, places and events. She grew up in the family home that was connected to the trading company, and her memories of that enterprise remain vivid.

Newlyweds Polly and Jack Cline stand outside the Bisti Trading Post holding a dog in this photo, circa 1931. (Photo: Courtesy of Judy Cline)

"I grew up there, and I spent my childhood there," she said. "My mother created quite a lovely haven out of a backyard of dirt."

Even after all this time, Cline can recall how her mother had a piano placed in the trading post so she could offer lessons to the children of some customers, who paid in produce instead of cash. And she laughed when she talked about how she and her siblings used to play in the rooms where wool and Navajo rugs were stored at the business.

"There were stacks of Navajo rugs in there," she said. "Just think of how many thousands of dollars of rugs we were playing on (if you consider their contemporary value)."

One of her fondest memories, Cline said, involved watching her father fill paper bags with peanuts, hard candy, apples and oranges to hand out to the children of customers as gifts during the holidays. And images of customers' buckboard wagons hitched to horses remain etched in her mind to this day — something she said that brought curious looks from people when she moved "back East" as a young woman and told stories of her upbringing. 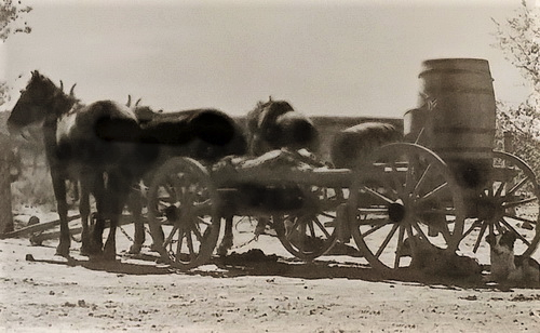 A typical Navajo wagon is loaded and prepared for the trip home after its owners finished their visit to the Fruitland Trading Company in this photo circa 1930s. (Photo: Courtesy of Judy Cline)

"It seemed like such a natural thing to me," she said.

Cline's favorite aspect of the trading post was its collection of soft fabrics and brightly colored threads.

"That was my favorite thing, to stand in there and organize spools of thread in just the right way, according to me," she said. "And I can remember my dad grinding coffee, the barrel of cider vinegar we used to keep in the store and the water pump outside where people would fill their barrels."

More: Past and present still meet at a handful of Four Corners trading posts

With few modern trading posts fulfilling that traditional role these days, Cline acknowledged those kinds of experiences are a thing of the past. But she said that era when trading posts were king in the Four Corners is well worth remembering and celebrating.

"It was incredibly unique, and it's a dying profession," she said. "It was an important time, and it's dying out, and that's why people are interested."

More: Is it the last stand for the trading post?

Cline's "The Cline Family & Memories of the Fruitland Trading Company" presentation will take place during a meeting of the historical society at 6 p.m. Oct. 9 in rooms 4 and 5 at the Farmington Civic Center, 200 W. Arrington St. Admission is free, and everyone is welcome.