The Big Idea @ SJC will use the federal money to hire personnel to help staff the facility. 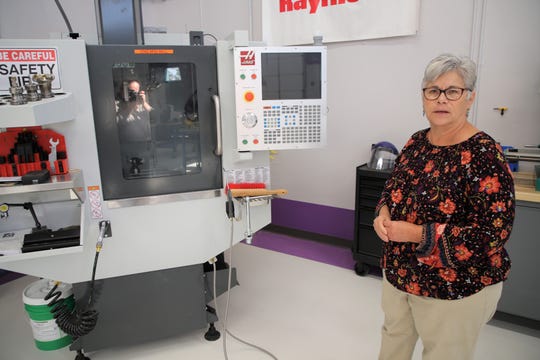 Judy Castleberry, director of San Juan College's Enterprise Center, shows off some of the high-tech equipment at The Big Idea @ SJC Aug. 22 after the school recently received a federal grant for the facility. (Photo: Mike Easterling/The Daily Times)

FARMINGTON — The latest step in the evolution of San Juan College's so-called innovation accelerator — an on-campus work space that features a variety of high-tech manufacturing equipment for use by entrepreneurs — has come about through the school's receipt of a nearly $385,000 federal grant.

The 3,000-square-foot workspace — officially dubbed The Big Idea @ SJC — was launched amid much hoopla in February after school officials raised $350,000 for its outfitting and operation in the college's Quality Center for Business.

The project got a major boost on Aug. 19 when members of New Mexico's congressional delegation — U.S. senators Tom Udall and Martin Heinrich, and U.S. Rep. Ben Ray Lujan — announced the college had been awarded a grant for the facility from the U.S. Department of Commerce's Economic Development Administration.

Lorenzo Reyes, the college's workforce and economic development dean, said SJC officials submitted the grant request in April and learned it had been accepted late last month. Since it opened, the work space has been used by dozens of San Juan College students, local business representatives and individuals hoping to launch new products, all of whom have arranged for memberships in the center and undergone training to safely use its machinery. That includes 3-D printers, laser cutters, advanced sewing machines, a technology station for robotics, and metal and woodworking equipment.

"We have several local individuals using the space to develop prototypes," Reyes said.

The innovation accelerator is viewed as a mechanism through which local government officials can work to diversify the economy in San Juan County. With that in mind, San Juan College officials have chosen to have The Big Idea focus on three areas of product development — energy, agriculture and outdoor recreation. Those first two areas already play a major role in the county's economy, while the third category reflects a new effort by the City of Farmington to rebrand itself as a tourism destination through its Outdoor Recreation Industry Initiative.

The college is partnering with the city in that effort, hoping to make an impact by encouraging the design of new outdoors-oriented products, then seeing them manufactured here and sold around the world.

Armed with the new grant, San Juan College officials will be hiring various personnel to help support The Big Idea, including an outdoor recreation commercialization director. While that title is a bit of a mouthful, Judy Castleberry, the director of the college's Enterprise Center, envisions the position being filled by someone who is well connected in the world of outdoors products and manufacturing, and who can help local entrepreneurs realize their vision by bringing their products to market.

"We're looking for somebody with experience in the field, who knows how to do manufacturing, who has taken products from conception to the market," she said. "We want to find somebody with ties to the outdoor recreation manufacturing community."

The three-year grant goes into effect Oct. 1, and college officials hope to move quickly by filling the first staff positions by November. Other grant funds will be spent on travel, with the outdoor recreation commercialization director intended to become a fixture at outdoor recreation marketing events.

In the meantime, college officials hope the additional staff members at the innovation accelerator will help draw more traffic to the project. The high-tech nature of much of the equipment limits its accessibility, and a fair amount of coaching is required to prepare would-be entrepreneurs to take full advantage of the services the accelerator offers. 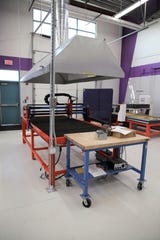 A plasma table is one of the more elaborate pieces of high-tech equipment featured at The Big Idea @ SJC. (Photo: Mike Easterling/The Daily Times)

Between the new grant and the college's initial investment, Reyes pointed out The Big Idea soon will represent an outlay of several hundred thousand dollars. That means expectations for the facility are high. Castleberry made it clear she wants to see the workspace become a beehive of activity in the years ahead.

"We have a lot of very expensive equipment sitting there," she said. "We don't want to think we're building a field of dreams and nobody's using it."

Reyes emphasized The Big Idea is just part of the college's work to become a vital cog in local economic diversification efforts, explaining that effort takes both academic and nonacademic forms. He said SJC has received other Economic Development Administration grants in the past, and he believes the school's record of demonstrating results with those is part of the reason it received the latest grant.

"The college is becoming a pillar of economic development in the community," he said. "We want to be that pillar."