An exhibition of work by young Native artists from the Four Corners will be displayed this weekend at the Santa Fe Indian Market.

'On the Rise' exhibition organized by Farmington's MIchael Billie 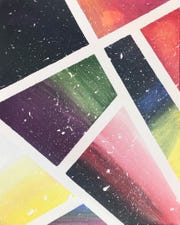 "Paint in Harmony" by Tinelle BullBear of Kirtland Central High School is featured in an exhibition this weekend at the Encaustic Art Institute during the Santa Fe Indian Market. (Photo: Courtesy of Michael Billie)

Eighteen students from Kirtland Central High School and eight from Navajo Preparatory Academy will be part of the "On the Rise — Artists in Early and Mid-Career" exhibition being displayed Aug. 16-18 at the Encaustic Art Institute in Santa Fe.

The exhibition has been hanging since June 7 at the New Mexico Cancer Center in Albuquerque and was funded by a National Endowment of the Arts grant to Capacity Builders Inc., a Farmington-based nonprofit organization that offers programs designed to improve the health and quality of life of Diné and other Native American people.

Exhibition organizer Michael Billie of Farmington arranged for the show to move this weekend to Santa Fe, where he is a board member at the Encaustic Art Institute, to take advantage of the increased exposure that the Indian Market will offer.

"Indian Market is the biggest Native art fair in the world," Billie said. "It's the cream of the crop. All the other Native art fairs copy it, so it's a big deal." 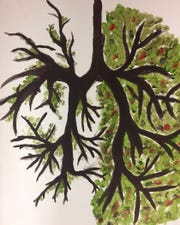 "Lungs" by Jakari McDonald of Kirtland Central High School is included in a show this weekend at the Encaustic Art Institute during the Santa Fe Indian Market. (Photo: Courtesy of Michael Billie)

The artists from Kirtland Central include:

The artists from Navajo Prep include:

Billie said the exhibition originally was intended to focus on adult Native artists from the Four Corners. But when he didn't receive the response he anticipated, Billie began approaching art instructors at high schools across the region, and with their help, he was able to recruit dozens of students to produce work for the show.

The exhibition originally was intended to include 25 works, but it swelled to 36 pieces because of the response of the students. It features mostly acrylic paintings, Billie said, and the subject matter ranges from abstracts and landscapes to animal portraits and politically charged Native commentary. 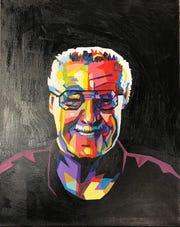 "In Memory of Stan Lee" by Trinity Juan of Gallup High School is included in a show this weekend at the Encaustic Art Institute during the Santa Fe Indian Market. (Photo: Courtesy of Michael Billie)

The grant provided for the showing of the work at the New Mexico Cancer Center. But when Billie approached Encaustic Art Institute founder Doug Mehrens about bringing the exhibition to his gallery for Indian Market weekend, Mehrens enthusiastically agreed, Billie said.

"If it does very well, and it's well attended, I think Doug would want to do it again," Billie said of the possibility of the exhibition becoming an annual attraction at the Encaustic Art Institute. "He loves working with kids."

In the meantime, Billie hopes the students whose work will be featured understand the significance of having their work displayed during the event.

"This is a big deal," he said. "This is something they can put on their résumé."