Cowboys for Trump take a ride from Farmington to Aztec

Couy Griffin spoke during an ice cream social in Aztec after riding from Farmington to Riverside Park with his organization Cowboys for Trump.

Cowboys for Trump take a ride from Farmington to Aztec

FARMINGTON — Cowboys for Trump leader and founder Couy Griffin says there is one main thing he wishes President Donald Trump would do that the president has not done — visit New Mexico.

"He needs to come," Griffin said. "New Mexico needs our president right now more than New Mexico has ever needed a president in history."

Cowboys for Trump rode to the ice cream social at Riverside Park in Aztec from Farmington after participating in the Connie Mack World Series parade on July 25.

Prior to the ride, Griffin said he hopes to convince Democratic Party members to switch their voter registration to either decline to state or Republican. 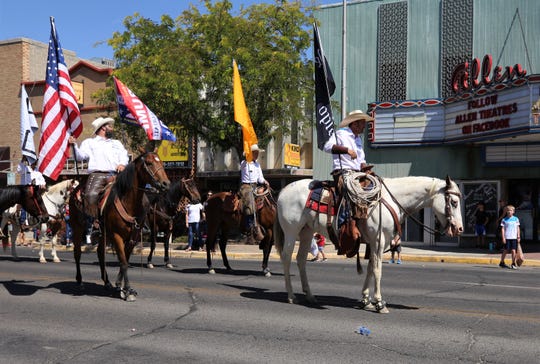 Couy Griffin rides at the front of the Cowboys for Trump group during the Connie Mack parade. (Photo: Hannah Grover/The Daily Times)

About a dozen riders joined Griffin to ride from Farmington to Aztec. Griffin carried a black flag that read “We the People” while others carried the U.S. flag, the New Mexico flag or white flags with “C4T” written in black letters. Each rider wore a white shirt.

A crowd waited for them at Riverside Park in Aztec and cheered as the Cowboys for Trump rode into the park.

Griffin first started the group shortly after the president’s election, but the group didn’t gain too much attention before it rode to Washington D.C. earlier this year.

Since then, the organization has gained a social media following of more than 60,000 people.

Griffin says there are three main policy issues at the center of the Cowboys for Trump platform — right to life, right to bear arms and securing the border.

Griffin is no stranger to spreading a message from horseback. He was previously an evangelist and rode across the country preaching about Christianity.

The current message Cowboys for Trump is spreading is that they support the president. 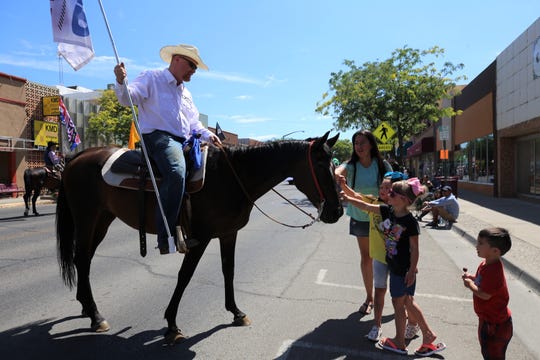 Griffin said there’s no better way to gain a reputation than on horseback and the horse helps him reach people who normally would not be interested in listening to his message.

“A horse is the greatest neutralizer that you can use,” he said.

He said the horse brings people’s guards down and he has had liberal Democratic Party members approach him because of the horse.

“It allows you to tell your side of the story,” Dale Hooper, a member of Cowboys for Trump, added.

Following their arrival at Riverside Park, elected officials spoke about topics like abortion and gun rights.

San Juan County Sheriff Shane Ferrari spoke about the Second Amendment sanctuary county movement. San Juan County was one of the counties that announced its law enforcement will not enforce any gun control legislation that violates the U.S. or New Mexico constitutions. This was done in protest of some laws that passed or were introduced during the legislative session — including a new law that requires background checks for almost every gun sale. The court system will ultimately determine if the new laws are constitutional. 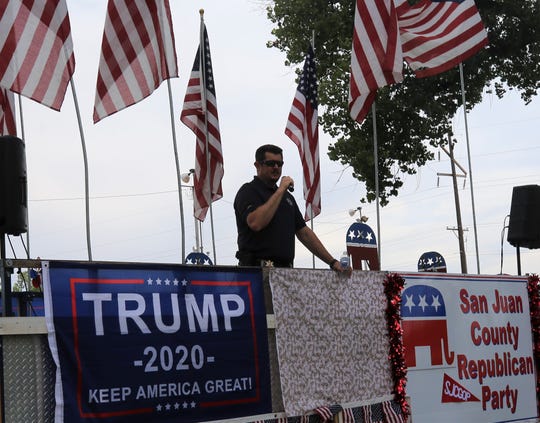 He said it felt as if the New Mexico Sheriff’s Association was not being heard by legislators.

“We did the only thing that a sheriff can do and that is to return to our communities and rally the people,” he said.

That led to the majority of New Mexico counties as well as several cities passing resolutions declaring themselves a Second Amendment sanctuary.

Ferrari also spoke about the importance of voting.

“2020 is going to be so important to this country and to this state,” he said. 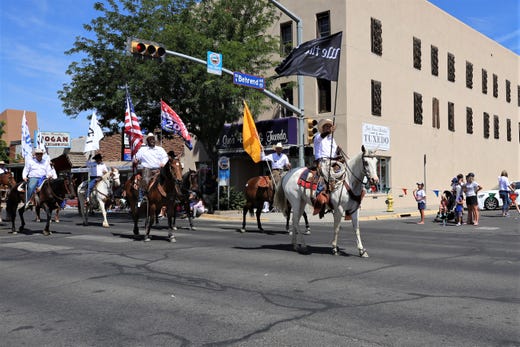 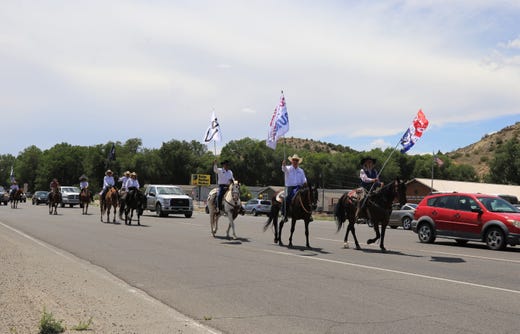 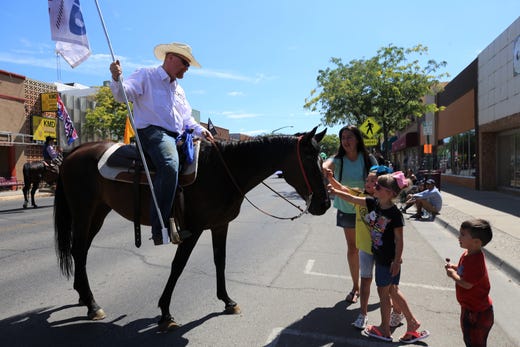 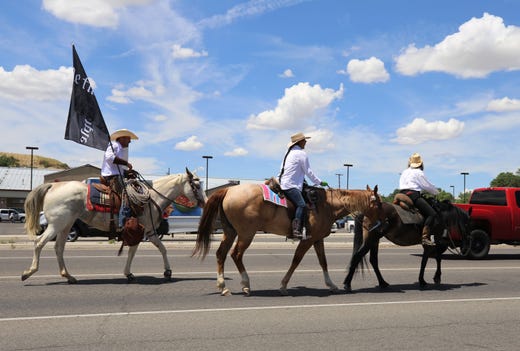 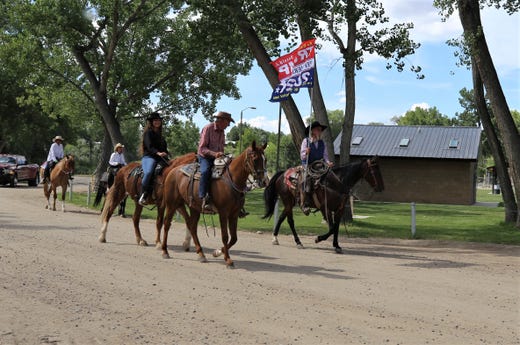 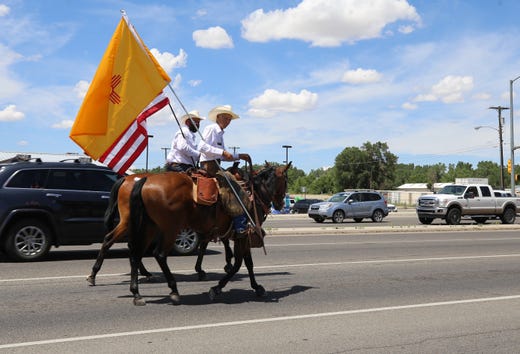 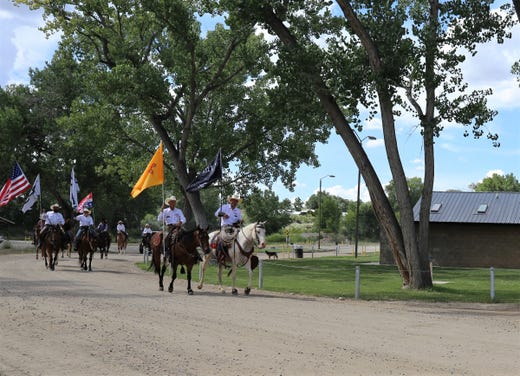 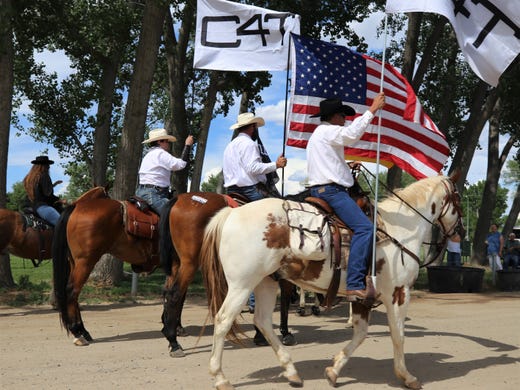 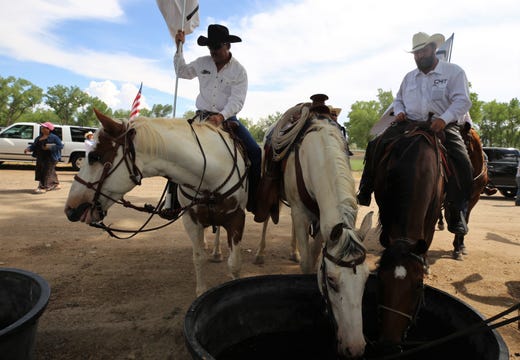 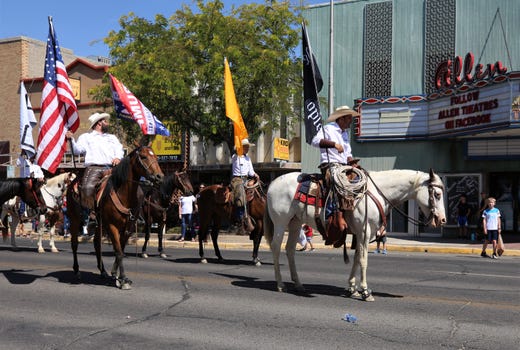 Couy Griffin rides at the front of the Cowboys for Trump group during the Connie Mack parade. Hannah Grover/The Daily Times
Fullscreen 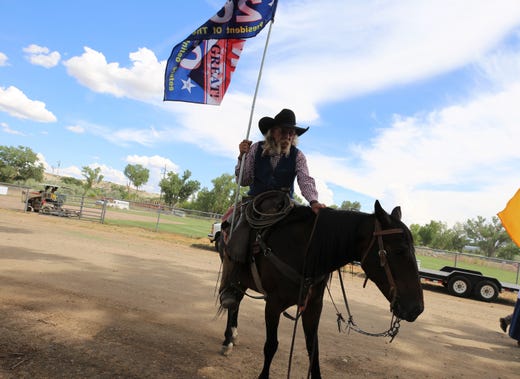 Jack Howard, a member of Cowboys for Trump, holds a flag following the ride from Farmington to Aztec. Hannah Grover/The Daily Times
Fullscreen